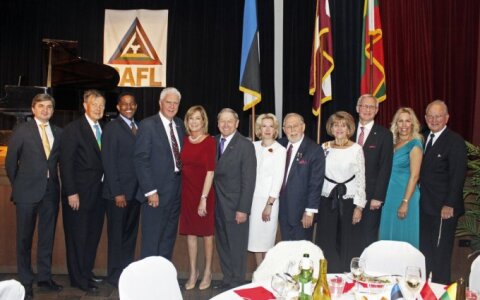 The sold out event began as the Master of ceremonies, Daiva Cekanauskas Navarette, the Honorary Consul of Lithuania in Santa Barbara and Central Coast California, warmed greeted the guests. Aivars Jerumanis, Director of the Baltic American Freedom League, followed her and delivered a thoughtful invocation reciting prayers for continued peace and security in the Baltic States. Nora Miculs followed by enthusiastically playing the national anthem on piano. Baltic American Freedom League, BAFL President Valdis Pavlovskis continued the momentum by enthusiastically speaking to the group. Valdis focused his message on the commitment, persistence, and dedication of BAFL's work, and on all that was necessary to see the group through many difficult moments in the past 35 years. Mr. Pavlovskis reiterated the group's necessity in these politically uncertain, even volatile times, stating that this ceremony marks the 35th anniversary of BAFL's existence and their continued commitment to ensuring and protecting the sovereignty of the Baltic states of Latvia, Lithuania, and Estonia.

After Valdis' impactful speech, The Honorable Inara Murniece, The Speaker of the Saema of the Republic of Latvia addressed the audience.

Ms. Murniece has been a member of Saema since 2011, assuming the role of Speaker of the Saema in 2014. She bolded stated her position that Russian aggregation is a continuing and persistent threat to the entire Baltic region, and that she works diligently with that thought ever present in her mind, in all of her work every single day, to preserve and protect those hard won freedoms.

Inara spoke in great detail on the important strides made in Latvia to strengthen the country from the inside out, making Latvia more economically, politically and societally strong and secure. She eloquently stated that Baltic soldiers stood should to shoulder with our NATO allies in both Iraq and Afghanistan and paid our NATO dues not only in money, but also in the blood of our fallen soldiers.

This year's recipient of the BAFL President's Award, long –time Estonian President Toomas Hendrik Ilves, delivered a direct yet poised speech by which he reminded the attendees that we in the Baltic states live in a bad neighborhood, stating "Ireland can afford not to join NATO. As long as Russia is aggressive and tries to influence elections, politics, economics, we need to remain members. Freedom is a torch passed from generation on to the next, to ensure the continued sovereignty of the Baltic States, NATO membership is a must."

The program concluded with a lively question and answer period with the attendees.

This was the 35th annual BAFL awards banquet. Much has changed and some issues remained constant over the last 35 years.

Angle Nelsas, BAFL executive president and Valdis Pavlovskis, the current BAFL President witnessed those challenges and changes, Angele from about BAFL's 6th year, and Valdis being a charter member. They shared a little about the biggest challenges they met over so many years of service, as well as their favorite memories.

BAFL President Valdis Pavlovskis stated "The biggest challenge most of the time is also the biggest success, BAFL has two. The biggest challenge was to be accepted and recognized by other national Baltic organization as a forceful and effective promoter of political and national goals of the Baltic American community. We got the Congress (Senate and House) to pass the Baltic Freedom day Resolution in 1982, which asked President Reagan to issue a proclamation regarding the Soviet occupation of the Baltic countries. In his resolution, the President clearly and forcefully declared the Soviet occupation of the three countries is illegal and against the wishes of the population and that the United States does not recognize it and that the United States supports freedom and independence or the Baltic countries. Just last month (April) the House of Representative Foreign Affairs Subcommittee had a public hearing on the Baltic States. and the Ranking Member of the Committee, George Meeks (D-NY), stated that President Reagan's 1982 Proclamation is a corner stone of U.S. relations of with the Baltic countries. I was the President at the time of BAFL at the time, but this landmark achievement of ours, would not have been possible without the fervent and diligent work of many others who assisted us. Above all else, our biggest success was working with other Baltic American organizations to get the Baltic countries into NATO.

When asked about this year's banquet. Mr. Pavlovskis shared "My favorite moment was the singing of the national anthems. It made me feel like are truly sisters and brothers, and that no one can stop us from reaching our goals."

Ms. Angele Nelsas stated "I had three major challenges, first one was in speaking with Congress and President Bush during the re-establishment of independence of the Baltic States. Secondly, creating the Baltic Caucus, and thirdly passing the HCR 51- the Kresnisberg/Kaliningrad demilitarization protocol. It took unbelievable resolve to not give in, in the face of unbelievable obstacles, and to engage our Congress to pay attention to the Baltic States. We spent three months in the Washington DC pushing relentlessly to turn the Baltic States to face west, to make the Congress see that the sovereignty of the Baltic States was in all of our best interests.

When speaking on this year's program, Angele mostly appreciated the fact that so many people took time out of their busy schedules to attend. Despite many other concurrent events, our event was sold out. I loved the messages our speakers shared. They spoke on Baltic unity, shared ideals, and the importance of keeping all three countries safe from Russian intimidation and threats. It was fantastic to hear the speakers understand each other and what each state is trying to achieve. The message that all three countries are still growing, yet are already strong, productive, responsible, globally important states, is an important one to share. Ms. Nelsas added "Thank you everyone for attending, and for the many generous donations, that empower us to continue with our efforts to preserve the freedom of the three Baltic States for another year. See you at the 2018 BAFL awards banquet."