On construction of fence on the border with Russia 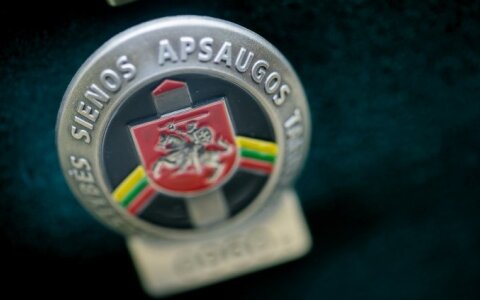 The Minister of Interior spent the better portion of Mondays afternoon in Ramoniškėse, almost 200 kilometres from the state capital Vilnius. After placing the first fence pole on the Kaliningrad region Eimutis Misiūnas stated that the two meter tall fens will protect the country Russian provocations BNS reported.

Although, because of the visit to the Šakiai region the Minister was not able to make it back in time to the capital where a meeting with security services was being held regarding the measures needed to be taken regarding state security following the terror attacks in Europe. The high-ranking official did not convince a large part of the local population, as well as security experts to which the building of the wall is associated with only political slogans rather than having an actual benefit.

"In 2014 Estonian official's accursed Russian officials of kidnapping an officer from their territory. Thus, in order to avoid the possibility of these potential situations we decided to build a fence" – stated E. Misiūnas.

Moreover, the Minister continued on talking how the Russian-Estonian border incident of 2014 during which Russian officials detained and later on sentenced an Estonian security official Eston Kohver regarding espionage activities. Although, Estonian officials stated that the official kidnapped on the border of their country was traded back for a Russian spy.

The construction of the fence has also received attention from the international media. Its contrition has become a symbol illustrating the concerns of the Baltic States over the Russian military threat, as well as the controversial statements made by the President of the United States of America Donald Trump whose has expressed interest in building a border wall along the Mexico border in order to protect against illegal migration.

According to, the Lithuanian Government the wall will be of use regarding the prevention of both cigarettes and alcohol smuggling, as well as stopping the flows of illegal migration.

"For today, there are no problems in the area caused by illegal migration. However, we are also looking into the future, analysing all possibilities and actions that could be taken. Today, a bigger head ache for us is affairs of the shadow economics" – stated Renatas Požėla the commander of the State Border Guard.

"The building of the wall is just an added security measure which combined with other monitoring measures only adds to the combination of deterrence measure for potential border violator" – he stated.

The building of the fence began on Monday and will be finished by the end of the year, which will range about 45 kilometres on the Lithuanian side on the border of the Kaliningrad Strip. Later on, a network of cameras and movement recording devises will be installed.
The building of the fence will be undertaken by the Vilkaviškis' based company "Gintrėja". The fence with barbed wire on top will arise in areas where the states border with Russia is on the land. The building works are currently valued at around 1 million335 thousands of euros which be funded directly out of Lithuania's budget.

Moreover, the Government plans to build a wall with sophisticated and modern monitoring measures along the whole border of Lithuania with Russia and Belarus.

Why is the fence needed?

Although, the construction of the fence was announced by the Government of Lithuania in January. The talks of the Government did not persuade the Šakių district mayor Edgaras Pilypaitis.

"Perhaps in the short-term we will achieve something, but we also need to examine the cost. Is it reasonable to make an investment into such measures? I do not know" – stated shrugging his head the head of the municipality.

According to, E. Pilypaitis the fence will also prevent the possibility of the utilization of the Nemunas route for tourism.

"However, exactly are we going to border the border and the river? And what if something will change in the future regarding Russian politics, we will no longer be able utilize the Nemunas river for tourism needs" – noted the mayor.

The residence of the nearby town of Sudargai are also unenthusiastic about the decision.

"I have lived here for forty years and this is the first time I have heard about this fence" – stated Birutė Enzelienė an employee of the 61st municipality.

Furthermore, a 26 year old employee of a shop in Sudargai, Indrė Urbonavičiūtė stated that the building of the fence will not be enough to guard against smugglers.

"I am doubtful, but for what is the fence needed? The people that will want to smuggle will still find a way to do this" – the cashier stated.

Moreover, the former head of the State Security Department Mečys Laurinkus stated that from a military perspective the planned fence is pointless, and more importantly it's pointless in regards to the fight against smuggling.

"It will not be able to stop aggression on land, let alone the sky. Both politicians and specialist understand this but the empty phrase is still running on repeat. The refugees' are not even temped to come to Lithuania. But can this even prevent smuggling? No, because the level on contraband is directly proportional to the level of corruption abroad. So how is this project useful? Well a part from doing something, nothing." – stated M. Laurinkus to "Lietuvos Rytas".

On construction of fence on the border with Russia