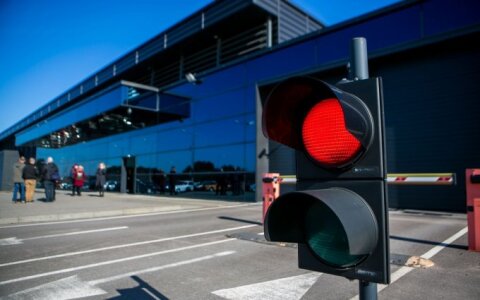 In the front of the new HQ of the State Security Department in Vilnius
Foto: DELFI / Karolina Pansevič
aA

How to better recognise spies, what cannot be accepted from strangers, what it is best not to speak of and who to inform when placed in a precarious situation – these are some of the potential risks that State Security Department (VSD) officers have been coaching members of Seimas in. That said, the "Farmer" companions of Seimas Speaker Viktoras Pranckietis, who initiated the coaching, have decided to delay it until autumn, while the Liberals have been struggling to obtain coaches from the VSD.

"I am aware that the Seimas Speaker had arranged with intelligence officers to have meetings with members of Seimas. Knowing is always better, however the session is drawing to a close and many important tasks still await, thus it would be good if the coaching could be done at the start of the autumn session," said Seimas vice Speaker Rima Baškienė of the "Farmers".

When asked whether she, as a veteran in Seimas, is already able to recognise potential spies or potential risks to her activities, she admitted that she had not experienced such things.

The politician was confident that it is first of all most important to uphold the State Politician Behaviour Code and Member of Seimas Oath, then no conflicts of interest and unwanted situations would occur, appearing in the company of suspect individuals.

Liberals struggling to obtain coaches from the VSD

"What interesting coaches. A subordinate institution to Seimas, we would think, wanted to organise meetings with members of Seimas. Well, let there be coaching, but when we proposed officers three potential dates for meetings, none of them were suitable. Apparently they could only come on Mondays or Fridays. But based on the Seimas statute these are days for meeting voters. We will see," said the Liberal Movement Seimas group prefect Eugenijus Gentvilas.

He is also a veteran member of Seimas, having also been a member of the cabinet and the European Parliament, so he probably can recognise potential spies or intelligence efforts for recruitment?

"I view everyone with suspicion. You as well," the influential Liberal quipped. On a serious note he admitted it would be beneficial to meet with VSD officers, however if they cannot find time for it, then the only recourse would be to call them in, after all the VSD is subordinate to the Seimas.

E. Gentvilas stated that during the whole period of independence, no-one has attempted to recruit him to work against Lithuania, but did not hide that former USSR KGB agents tried to draw him to their side in 1989, a fact he has publically disclosed.

Order and Justice hear nothing new in the coaching

The leader of Order and Justice and its Seimas group prefect Remigijus Žemaitaitis has stated that what the VSD officers explained during their meeting was old and banal.

"They explained to us that spies could be both from Russia and Belarus, and other countries, that they can present themselves as representatives of embassies or certain companies, that we should avoid invitations to free events. I have only met with one of the intelligence officers that visited our Seimas group. He also attended the commission investigating the activities of Mindaugas Bastys," R. Žemaitaitis shared.

Rookies most in need of coaching

The VSD officers are to visit the Social Democrats next week. Group prefect Andrius Palionis stated that the coaching was most in demand among the "Farmers" because their ranks are filled with rookies.

Conservative leader and group prefect Gabrielius Landsbergis, serving his first term in Seimas, is convinced that the VSD coaching benefits both rookies and experienced colleagues. He explains he has participated in such training earlier, during his work in the Ministry of Foreign Affairs.

"I did not learn anything particularly new, but to me, as a rookie in Seimas, it was useful to hear how interaction with particularly attentive unknown people can end. The VSD officers described several interesting stories that occurred in Seimas," commented B. Matelis.

The politician particularly highlighted a story where a now former Seimas chancellery staff spoke to a Russian speaking man, who presented himself as a political scientist at a conference. Supposedly a student. He succeeded in arranging a meeting with her. Several times. After a while the woman noticed that it is not just political science that interest the man, he started taking further interest, asking for information from various spheres.

The chancellery employee informed the VSD of it, which uncovered the student as being a foreign agent. This event opened the way for the woman to pursue further career steps in state service.

"I do not believe that such persons immediately try to interact with members of Seimas or staff who have access to confidential information. They primarily seek connections among simple staff and then climb higher and higher through them," Matelis explained.

He also pointed out that after the meeting he understood that it is not mainly foreign embassy staff that interactions should be avoided with, but with representatives of NGOs from various countries.