Pranckietis in USA: sanctions against Russia should be retained until full implementation of the Minsk agreements 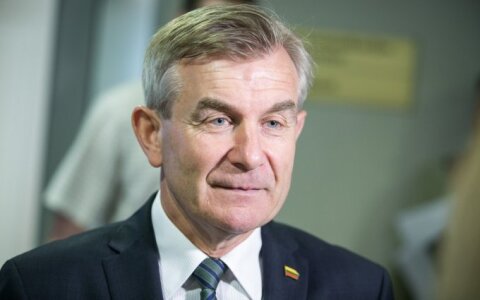 Viktoras Pranckietis, Speaker of the Seimas, discusses transatlantic security, support to Eastern partners and transatlantic trade, while on a visit to Washington D.C., USA.

Together with other Speakers of Parliaments of Nordic and Baltic countries, Mr Pranckietis met with the US administration officials in Washington D.C. on 27 June 2017.

The meeting with Andrea Thompson, National Security Adviser to the Vice President of the US, focused on discussions on European security, threats from Russia, support to the EU's Eastern partners, and strengthening of the transatlantic link. The Speaker of the Seimas called on the US to proceed with multifaceted support to Ukraine while major reform is in progress there, despite the fact that Ukraine must concurrently resist an external aggressor.

"Support for Ukraine plays a pivotal role in the stability and security of both Europe and the entire transatlantic community. The Marshall Plan to Ukraine, a document drafted by the Lithuanian Seimas, once implemented, would help making Ukraine a success story. This is what all the Eastern European countries need," Mr Pranckietis said.

At the meeting it was noted that the ongoing aggressive actions of Russia represent a threat to peace and security beyond Ukraine as well. Therefore, sanctions against Russia need to be retained until full implementation of the Minsk agreements. The meeting also discussed the presence of US troops in Eastern Europe.

The adviser to the US Vice President noted that the presence of US troops in the region is mutually beneficial both as a way to express solidarity with the US allies and to underline the US commitment to collective defence. She also praised the training and upskilling opportunities that the US soldiers receive there.

During his US visit, Mr Pranckietis also participated in the meeting of Speakers of Parliaments of Nordic and Baltic countries with Israel Hernandez, Deputy Chief of Staff for the Secretary of Commerce of the US International Trade Administration. The meeting focused on the importance of trade in enhancing the transatlantic relations. It was noted that the cooperation between Europe and the US in the field of energy, including trade in liquefied gas, has the effect of strengthening both the economies and the security of the countries involved.

Alongside the meetings, Mr Pranckietis participated in a seminar in Washington D.C., entitled Challenges in Northern Europe and How to Face Them Together.

"I am delighted that the US and the Nordic and Baltic countries speak in one voice regarding the management of new security challenges, support to Ukraine, and the strengthening of transatlantic economic relations. The US representatives have stressed the US commitment to NATO on numerous occasions both in the US Department of State and at the meeting with Senator Robert Menendez. The US expects other NATO countries to follow suit," the Speaker of the Seimas said.

At the Embassy of Lithuania to the United States of America, Speaker of the Seimas met the Washington D.C. Lithuanian American Community.

Pranckietis in USA: sanctions against Russia should be retained until full implementation of the Minsk agreements