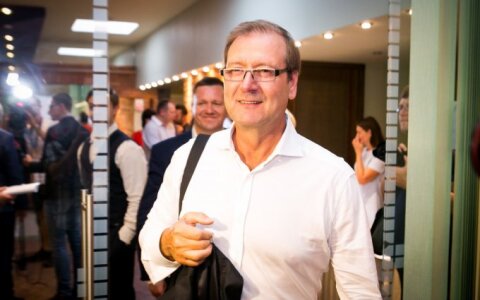 Viktor Uspaskich's return to the Labour Party coincides with an increasing portion of voters undecided or not planning to vote in the coming elections, which forms favourable conditions for both new and old political parties to mobilise new votes.

"43% state they will not vote or are undecided, last month the percentage was at 39, earlier – even less. In this case it is a very large amount. New or mobilised old political powers have an opportunity to draw in voters, people are thinking anew, seeking something," the head of the public opinion and market research company Vilmorus Vladas Gaidys said.

The sociologist noted that V. Uspaskich's chances depend on the media's attention toward him. This is comparable to the situation in 2003 when his ratings rose with every media appearance.

"I would think that similarly it will depend on the news media once again. Now he is performing a new role – being a health guru, healer of the spirit, this is a completely different V. Uspaskich and a different Labour Party," V. Gaidys described the change of image.

Vilnius University Institute of International Relations and Political Science (VU TSPMI) professor Ainė Ramonaitė points out that there is a significant number of leftist inclined voters, who are never stable in their support for parties in elections, jumping from one to the next.

"On that side the potential always exists between those constantly dissatisfied with the current situation in the country, those long left disappointed and grumbling. The "Farmers" took up a sizeable portion of that electorate, but it could be temporary because there are no long term fundamental factors there which would bind the voters to the party," A. Ramonaitė said.

Nevertheless, according to the political scientist, there is potential to gather voters who will once again seek something new during the next elections, the question remains though, "Is it possible to ford the same stream again?"

"I do not have a straightforward answer to that. It was clear that the Labour Party's popularity is directly linked to the person of V. Uspaskich, disappearing when he did. Without the individual's influence on voters, even the party organisation, it would appear, was linked to V. Uspaskich because with him gone, the whole massive organisation began dissolving," A. Ramonaitė said.

The expert highlighted that based on voter choices, typically the Social Democrats, Labour Party and Order and Justice Party overlap. During the most recent elections, the Lithuanian Farmer and Greens took hold of a portion of this vote.

"But our latest survey after the 2016 elections showed that the Labour Party has now gained a very negative image and there are many inclined against it. They even exceeded the Homeland Union in this regard. It will be far more difficult to raise the party back up this time, rather than make something new altogether," A. Ramonaitė said.

As per the BNS news agency, last weekend V. Uspaskich signed an application to enter the Labour Party at its Kėdainiai branch.

V. Uspaskich departed the party in 2015, but remained its honorary chairman. On Friday there was to be an extraordinary party council meeting with V. Uspaskich attending, but with the quorum not gathering, it was not held.

V. Uspaskich founded the Labour Party in October 2003 and with a brief pause remained its chairman up to 2013. In 2013 he and a number of other Labour members were judged guilty by the Vilnius district court for false accounting. The politician was then sentenced to four years imprisonment.

With the Appeals Court finishing to review the case in December 2015, V. Uspaskich announced his withdrawal from the party. The appeals court fined him 6.8 thousand euro for the falsification of bookkeeping, a punishment upheld by the Supreme Court as well.

Currently the Labour Party would receive 3% of the vote, according to a survey by RAIT, commissioned by BNS.

Conservative and Farmer ratings on the move

Based on the same survey, data shows that in June the percentage of undecided voters reached 33%, with 31% being undecided in April and May, and 35% undecided in March. These numbers include respondents who did not answer, stated they were unsure who they would vote for or were prepared to spoil the ballot paper.

The June data shows "Farmer" popularity down to 19%, with the Homeland Union – Lithuanian Christian Democrats at 16%. The gap between the two has been decreasing for the past four months.

Both the Social Democrats and Liberal Movement would receive support from 9% of voters, their popularity remaining stable. The remaining parties would be unable to exceed the 5% vote barrier, with Naglis Puteikis' Lithuanian Centre Party being closest to it at 4%.