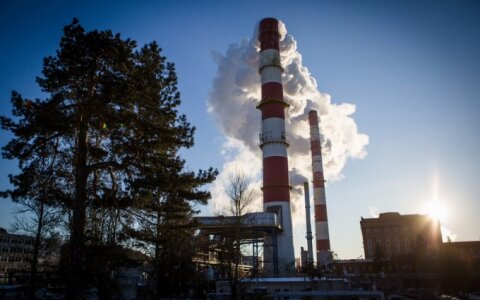 The 9-percent value-added tax (VAT) discount tariff for heating will be reintroduced in Lithuania on a temporary basis between the fall and the end of 2017, Finance Minister Vilius Šapoka said. The discount for 2018 has not yet been specified.

"My position remains unchanged – the tariff could be at 9 percent from the fall until the end of 2017. When it comes to requirements of the European Union (EU), as we can only have two discount tariffs. We have reviewed and decided to apply a lower tariff on some goods and services, i.e., 5 percent instead of 9 percent," Šapoka told journalists after discussing tax reforms with the prime minister on Tuesday.

The finance minister did not specify the government's final proposals on the VAT discount for hotels, however, Economy Minister Mindaugas Sinkevičius said that a compromise version had been offered.

"Things will not be the way they used to be, however, this does not mean that there will be no discount. We will have a compromise version. However, the parliament will also be involved in the process, therefore, the changes can still be revised," Sinkevičius told the news conference.

According to information available to BNS, the Finance Ministry suggests leaving 5 percent and 15 percent VAT tariffs for 2018, with the 15-percent tariff applied to heating and hotels. Before June, the VAT on heating was 9 percent and is now 21 percent, while hotels pay a 9 percent VAT tax.

Furthermore, there is a proposal to lower the existing 9 percent tariff on books and passenger transport to 5 percent.

At the beginning of July, the ruling Lithuanian Farmers and Greens Union agreed with the proposal made by the opposition conservatives to reintroduce a lower VAT tariff on heating in exchange for their support to the reform of the forestry sector. The deal did not specify the VAT tariff, however, the conservatives' leader Gabrielius Landsbergis stated it should be at 9 percent.

In Sapoka's words, the Cabinet's final proposals on tax changes will be presented next week after discussions with the society.

The tax reform will have to be finalized by the parliament.