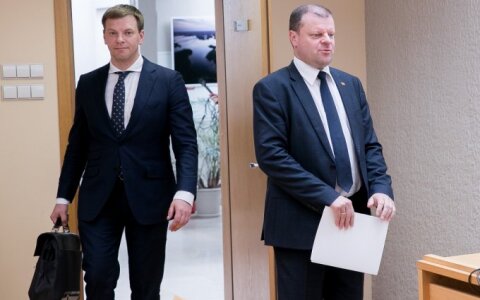 Minister of Finance Vilius Šapoka has announced that the 9% VAT exemption for heating is to be temporarily returned from autumn to the end of the year. What it will be like from 2018 has not yet been revealed.

He announced this after a Tuesday meeting with Prime Minister Saulius Skvernelis. That said, the Prime Minister did not mention a word to journalists regarding the planned changes. He left this to the minister.

"My position stands that by the end of this year, starting in autumn, that tariff could be 9%. Due to EU regulations, since we can have only two discounted tariffs. Respectively we have reviewed for what goods and services we could have lowered tariffs – 5% instead of 9%," the minister said, mentioning that changes to VAT tariffs on other goods have been talked of.

According to him, most proposals from the public have been received regarding the minimum monthly wage and untaxed income amount being equalised, extra exemptions and etc.

V. Šapoka promised that all the planned changes will be presented to the public next week.

"Speaking of the whole pack (of tax changes), it will be more streamlined," V. Šapoka assured.

Minister of Social Security and Labour Linas Kukuraitis had equally little to add after his meeting with the Prime Minister.

Minister of Economy Mindaugas Sinkevičius mentioned that the VAT exemption will apply to hotels, but there will apparently be an intermediate variant between the current taxation of accommodation services and the radical proposal to completely remove the exemption.

Last week the Ministry of Finance informed that it received a total of 40 responses from individuals and associated structures through public consultations regarding tax changes.

"The most discussed topics were agriculture (split halfway between argument for and against the proposed changes). Half of those writing proposed establishing progressive taxation, the other half –to not do so. Changes to VAT exemption tariffs and luxury real estate taxation received much attention.

The ministry assured that some of the proposals will be taken into account, certain initial projects will be adjusted based on them. The cabinet will present Seimas its tax legislation changes alongside the budget project in autumn.

As a reminder, the initial tax change project was presented in June. At the time it was proposed to increase the untaxed income size (the part of one's income which is not taxed through the income tax) from 310 euro to the minimum monthly wage, which is 380 euro.

There was much controversy over the proposal to establish a 100 euro exemption for Sodra payments for low income earners. Seimas Committee of Budget and Finance chairman Stasys Jakeliūnas has described this proposal as a slight because in his opinion this would benefit employers far more than employees.

Another proposed change is a minimum monthly wage (380 euro) social security payment floor for employers. Based on this, Sodra payments would have to be paid from a sum that is no less than the minimum monthly wage, regardless if the employee works 1 hour or 40 hours per week.

The Ministry of Finance proposed to end the distinction of personal business activities based on 5% and 15% VAT tariffs, so that its size would depend on the real income of the business.

In order to reduce the scale of the black market, there were ideas to review the list of individual business activity types and remove construction works and car repair.

In order to encourage entrepreneurship, the Ministry of Finance proposed to establish a 1 year income tax "holiday" for small businesses to get started, as well as a 1 year Sodra payment "holiday" for those hiring employees for the first time.

Furthermore there were proposals to establish a 5% income tax (instead of 15%) for the commercialisation of inventions and to provide a 100% income tax exemption for those investing into technological renewal (instead of the current 50% rate).

Finally there were discussions of establishing a Sodra payment "ceiling" of 120 average monthly wages per year (around 98 thousand euro right now). This would be expected to help attract foreign investment.