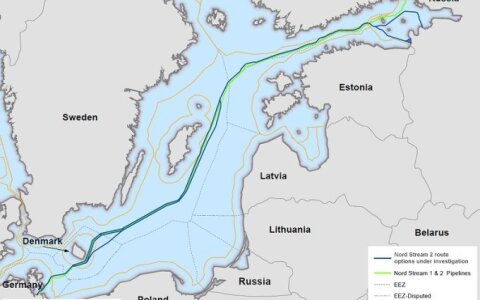 The United States seek to undermine Russia's influence in the energy sector, therefore, is skeptical about the Nord Stream 2 project, which would make Europe more dependent on the Kremlin, says US congressman Rob Bishop.

Bishop, chairman of the House Committee of Natural Resources, told BNS in Vilnius that the US sought to trim down Russian gas flows to Europe.

The Republican said the US did not only want to sell more gas to Europe but also to provide Europe with a few sources, which would make it impossible for Russia to use energy for political goals.

"I'm not trying to sell more American gas but provide the diversity and I think give people some economic freedom that equates also to political freedom at the same time. So if you are dependent on one source, Russia for example as the only source of economic ability, then that gives a great deal of geopolitical power to Russia, so we are hoping that the support can allow Lithuania to declare its own energy independence," Bishop told Vilnius journalists on Tuesday after a meeting with Parliamentary Speaker Viktoras Pranckietis.

"There's gonna be not political pressure, economic pressure to try end export everywhere. And if the United States can be a source of support for our allies, so they have greater flexibility and they're not holding to other interests, specific the Russians, that's a plus. That's not our primary goal. Our primary goal is yes to sell, because that's good, but we also want to give allies like Lithuania the chance having some diversity, so they can choose for themselves and their not going to be in the future extorted or blackmailed, because they don't have those options," said the congressman.

Bishop added that US did not see exclusively Eastern Europe as a potential gas market, noting it was looking at the whole world.

The US Congress delegation is also set to visit Germany to discuss the Nord Stream 2 project. In Bishop's words, US has questions about the project, as it is a political, not a economic initiative.

"Number one, if you try to diversify your economy by putting more Russian gas in there to try dominate it, that's not diversification. Number two, it is not simply because its an economic, once again this is political, we are very concerned what Russia has been doing in Georgia and Ukraine, and Crimea and the Baltic states and cyber attacks, we think this is part of the reason of discussion. And allowing Russians to simply dominate energy is giving them much more ability to do things in which they have not been a good player," he told Vilnius journalists.

In his words, the US will first of all open investigations of persons who disagree with economic and energy independence in Eastern Europe, as it is worried about the origin of the ideas.

US has tightened sanctions to punish the Kremlin for interference in the 2016 US presidential elections and annexation of the Ukrainian region of Crimea. The draft envisages sanctions for companies working with Russian exports gas pipelines. Observers say the US may seek to consolidate its influence in gas exports. Nevertheless, Bishop said that the sanctions are not about gas pipelines but about Russia's actions in Crimea and elsewhere.

"We're not doing the sanctions because of the pipeline, the pipeline I think it's a problem, because it will exemplify and add to Russia's ability to bully other people," he said.

Ukraine, Poland and the Baltic states say that Nord Stream 2 would make the EU more dependent on Russia's gas concern Gazprom, which already covers about a third of Europe's gas needs.

The pipeline would also undermine the importance of Ukraine as a transit country, also delivering a blow on the country's pro-Western government faced with economic and military pressure from Moscow. During a visit in Ukraine in June, Grybauskaitė pledged to block the bill.

Supporters of the Nord Stream 2 project say it would allow slashing gas prices. German, French and Austrian companies cooperate with Russia's Gazprom in the project.

The United States, which seek to become one of the key players on the LNG market, should deliver two shipments to Lithuania this year. In the second half of August, an LNG shipment purchased from US company Cheniere Marketing International should be delivered to the Lithuanian port city of Klaipeda. In July, another contract with LNG trade company Natural Gas Fenosa was signed on gas supplies from the US on delivery of a similar-sized shipment in September.

Buying gas from the US did not pay off before due to high prices caused by expensive transportation and liquefaction.