In power not so long ago – where do former politicians work now? 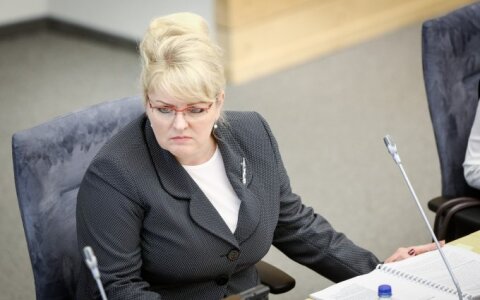 Politicians who held high offices last term, but did not enter Seimas again are enjoying their status as private individuals and some of them are unwilling to discuss their current lives. A number of the former politicians have turned to the private sector, some have been left disappointed with politics and feel like the experience they accumulated is no longer necessary.

Former Minister of Social Security and Labour Algimanta Pabedinskienė is currently working as an independent expert and consultant in Vilnius based on a business permit. She consults companies in questions of employee involvement, motivation, youth policy and employment, occupation in the regional dimension.

"I strive to adapt the competences I strengthened and brought to the ministry to market conditions. Currently I am an independent expert, I sell my ideas to the private sector and currently have nothing to do with the public sector. I organise international projects, propose my ideas, do what I am familiar with and know that I am sufficiently strong," A. Pabedinskienė said.

The former Labour Party politician does not participate in political activities anymore. "When I stated on December 13 that I am departing the political power which delegated me, to this day I do not believe that I have any interest or potential to participate in political life because you cannot make any tangible change even if you have many ideas. I think that far more can be achieved through civic, volunteer work," she said.

Former Minister of Agriculture Virginija Baltraitienė departed the Labour Party and is no longer active in political activities.

"Of course as an individual, as a citizen, I take interest in everything, but I do not participate in politics directly at all. I have once said that if I depart the party, I will not go to any other. And overall perhaps the last term displayed that, in my eyes, much is proceeding differently than it should and it appears very odd that our former partners in the coalition back then now propose the same things they once opposed to the "Farmers". I cannot say it is disappointment, but something of a disgust in certain people and everything in certain cases," V. Baltraitienė said.

The former minister works as the head of the National Food and Veterinary Risk Assessment Institute Department of General Affairs.

"I am working based on my profession, I have finished economics and have experience in administration. I am very satisfied with my work, as for how I am faring, my superior can evaluate," she said.

According to the former minister, the department she works in is responsible both for financial oversight and document management.

"The institute has five branches in Lithuania, all of which have their own finances and buildings. When you work in the Department of General Affairs, you are responsible for all the finances, documentation and maintaining the archives. These are the daily tasks we do. We are now braced for various reforms and changes, we are making preparations and calculating because just as in all other state institutions, reforms are proceeding here," V. Baltraitienė said.

Former Minister of the Environment Kęstutis Trečiokas has not withdrawn from politics and is currently leading the Order and Justice Party Telšiai branch. He calls himself a political realist.

"You are left disappointed with people and their work, sometimes you encounter unexpected stabs from the media, ones that are completely undeserved, but overall I am a realist. I know where we are and I have come to terms with it," K. Trečiokas said.

The former minister was unwilling to identify his current occupation, only confirmed that he works in the private sector based on his profession. He stated he has degrees in electrics and economics, thus he has had little trouble with work.

"I am a member of the council and do not have to present information because it hinders me. I started working in one place, Andrius Tapinas latched on to my employment. We have terrorism against formers (politicians), thus I do not believe that I should reveal it. (...) I do not want either the heads of my workplaces, nor myself to be persecuted. You know where we live, we live in Lithuania, we are guilty of having been someone sometime and our competence isn't useful to anyone, the decades of experience in state service is useless," K. Trečiokas did not hide his disappointment.

Enjoying the status of private individual

Former Seimas Speaker Loreta Graužinienė departed the Labour Party and is currently enjoying her status as a private individual.

"I am very content with the status of private individual and would like to continue being such for a time yet," L. Graužienienė said.

The former politician was unwilling to disclose her current occupation because, she explains, the specifics of the work require upholding certain ethics norms.

"I definitely do not wish to comment on anything because I am a private individual. I work in my profession – auditing," L. Graužinienė said.

In power not so long ago – where do former politicians work now?