R. Sotvarė-Šemetienė. Don’t seek grey cardinals in the list of the most influential 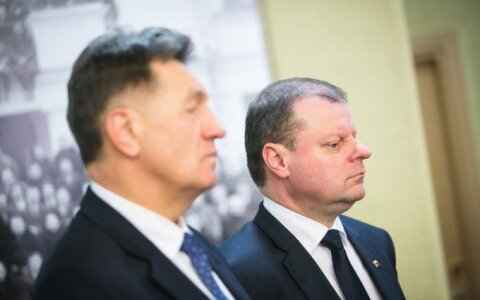 The third annual release of the Delfi ratings of the most influential individuals in Lithuania did not present any surprises. After reviewing it, it is easy to notice that this year, as before, the list of most influential politicians is decided by mainly two factors – posts held and both the intensity and content of public communications, Ramunė Sotvarė-Šemetienė wrote on LRT.lt.

President Dalia Grybauskaitė is difficult to surpass in this regard and is named most influential politician for the third time. She has the highest state office and while she perhaps does not communicate often, it is always tough communication. No comment is left unnoticed, while the annual address, better or worse, becomes an event and easily covers any lack of public communications.

It would be odd if anyone other than Prime Minister Saulius Skvernelis took second place. He mastered a unique public communications style some time ago and it clearly suits many. Only a high position in government structures was needed and the result becomes inevitable.

It would be logical to see the Seimas Speaker in second or third, but not in this case. The leader of parliament is more reminiscent of a nominal figure of government and his attempts to formulate evaluations or ideas more often leave one shrugging than listening in. Just the office is not enough, thus he is far lower on the ratings. Ramūnas Karbauskis does not have an impressive post, but he has the entire majority party and is clearly seen as its undisputed leader. As such his jump to the top three of the top ten is simply inevitable.

The results of this year's survey could be called a success for the Conservatives. There's no miracle here either though. Both Landsbergis – the senior and the junior – are unsurpassed communicators. When Vytautas Landsbergis speaks up, you always know something will happen, he will not be found lacking in words. His authority is recognised even by those who believe they dislike this politician.

Gabrielius Landsbergis has mastered modern means of communicating with the public better than any other, reacts to state events quickly and naturally.

Having become a free politician Andrius Kubilius, unlike most who lose party and government positions, revealed himself as an intellectual, even able to shift international agenda. More importantly – able to present his insights in social media; systematically, popularly, but not cheaply. This is why despite being unpopular in the public, he has a decent position in its rating and the elite simply cannot miss this.

These examples would suggest that communication means even more than posts nowadays. You can do all sorts of miracles quietly, labour day and night, but you will not be viewed as influential. This would be confirmed by the modest evaluations of the professional ministers, except the Minister of Foreign Affairs Linas Linkevičius, who has mastered this art. This is journalists appear at the top of the final list and specifically those whose faces are visible on television.

It is clear that there is also another important factor which impacts evaluations of political influence. It is nostalgia and respect or deeply remembered fragments of work beneficial to the people.

This is what keeps former President Valdas Adamkus, who is valued by all groups, on the list of leaders. Similarly so the goddess of retirees, former Minister of Social Security and Labour, MEP VIlija Blinkevičiūtė or Irena Degutienė, former Prime Minister social Democrat Algirdas Butkevičius, who are given high positions by at least the public.

Nevertheless A. Butkevičius' results, having been second last year, cannot be called successful. The same could, in principle, be said of the Social Democrats. Having left government after a slew of embarrassing scandals, having changed party chairmen, having attached themselves to the "Farmer" majority, the Social Democrats fail to grasp a relationship with voters. Seemingly stuck in the past.

Based on the survey it would appear that in principle they no longer have any perceivable influence on state life. L. Linkevičius who maintains good valuations from the elite is viewed separately from the party, thus changing little.

And this should leave room for pause. Are things really so? Having been in power for the most years, the Social Democrats have gathered a vast network of affiliated and supportive individuals in the state service network. The red nomenclature mentality web has not disappeared anywhere. Just as invisible, but real power. If they have not yet, the professional who boarded the train of power will certainly feel it soon. The same was as people who use government services every day do.

The survey does not encompass this, just as other similar aspects. It reflects the parade side of political power. A line-up of political stars which does not contain, because it cannot, grey cardinals of politics.

R. Sotvarė-Šemetienė. Don’t seek grey cardinals in the list of the most influential