Why is it that so many Lithuanians won’t rush to their country’s defence? 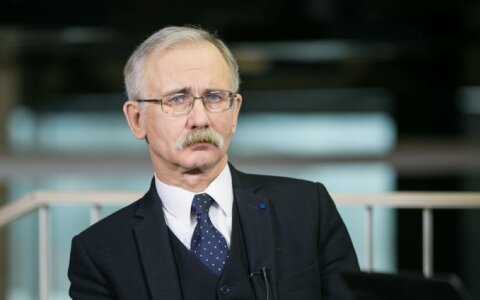 A few months ago the chairman of the Security Committee of the Seimas, Vytautas Bakas, shared the results of a survey which indicated that just about half of the people living in Lithuania see Russia as a threat.

Rather unwillingly, sometime later he had to make known other information from that very same survey which showed that 34 percent of the people living in Lithuania said that they had no intention of defending Lithuania. This figure has increased by almost 20 percent since 2014, a time when a strong stance against Russia was noticeable. To what extent do these conspicuous figures correlate (if at all)?

Only several weeks ago, three years of ongoing legal procedures (including court hearings) on what some of the public most likely still remember, came to an end. They're all linked to items of news that occurred one after the other in 2014 in Lithuania.

In wanting to give credence to the abovementioned which for me was unbelievable, efforts to get to the original Russian document, extremely important in all respects I believe, were sadly to no avail. There was a lot of resistance. Saying that I had signatory status and the law governing it didn't help. The main reason for the refusal for me to see this document was the fact that Russian approval (?), which was not requested and which clearly is non-existent, was required. Requesting a document that is in a Lithuanian state institution, and in having to do so apply to Russia for it, was something that I as a signatory to the restoration of Lithuanian statehood was, for reasons obvious to all, something I was not prepared to do.

Arguing without the facts (in this case the actual document) is something I unfortunately haven't learned to do. It's a pity that, as I have mentioned, almost three years of legal and bureaucratic disputes have gone by (the Chief Administrative Court's preparations alone for examination of the General Prosecutor's Office appeal, for incomprehensible reasons, took over a year). In the meantime the train moved on.

Now that I have familiarised myself with the relevant documents, I can safely say that the scandal over the reinstatement of the criminal cases - against our young people who left the Soviet Army - in order to bring them to justice, is a non-event. In the aforesaid Russian document there is nothing alluding to intentions to do that not by a single case or, especially, multiple cases.

I can boldly state that the public were misled, however the tone was set. There was practically no way of stopping the proceedings in order to give them at least some kind of objectivity.

Adding to these facts, a persistent escalation of grievance (to what extent this grievance may have affected Soviet-Socialist- communist Russia, and to what extent Russia itself has also suffered from Soviet-communist-socialism and most likely still hasn't recovered from and also maybe what today's Russia is relapsing into, is another subject) has created the perfect environment amongst the public to sound alarm bells and take up in politics an overwhelming fight against the enemy, one which, all things being equal, will be painful and risky for state policy.

As I have mentioned, this policy that cannot lose. If something happened, it's "yes we said it would" and if not then it's "that's just because of our preventative measures" without any assessment that the "preventative" measures themselves, a winding spiral, may be the cause of an irredeemable event. This is a policy that targets a potential (in our case, directly named) foreign enemy. It also allows us to cover up failures in domestic policy and social issues, i.e. if not suppress, at least deny critics of domestic politics.

I fear that because of shortcomings namely in domestic social policy (separately I would also highlight culture and the state's respect for the average citizen) there is also the rising figure of 34 percent, mentioned at the beginning, with great error I hope. It's not the number of soldiers or tanks that defend the state, especially under our conditions, but rather the will of citizens to defend it.

By subscribing to and encouraging these proceedings, our "state experts" and advisers, no doubt, are strong in international law and experts of the facts. However I do think that even if they do have a conscience, it is nevertheless difficult for them to comprehend what I would call state psychology and state mentality (and that is unique as to each specific person). Especially that of the Russians.

A policy based solely on an open opposition, without making an attempt to assess the opponent's internal or other, obviously unacceptable to us, reasons for an action, cannot be rational (here in Lithuania we remember rather the Soviet manifestations. We agree that in Russia objectively there are much more of them both in terms of its size and historical experience).

Returning to the aforementioned annexation of the Crimea. If our "experts" had predicted the supported, forced and well-known events in Ukraine (for each such event, in order for it to take place without a social cataclysm, the appropriate time and circumstances must mature or be made to mature) with the relevant consequences, and if these consequences are acceptable to them, then further discussion is rather complicated. And if they had not predicted these consequences (as well as the totally unacceptable, but predictable actions of Russia), then such are the experts (the approvers mostly) and their advice.

I believe Lithuania is not interested in the great competing powers stepping onto a threshold of cardinal choices (also when it affects us directly) and although our capabilities are somewhat small we hardly have to be the flagship of the powers that push towards the creation of such a situation. By the way, I am a little surprised by the constant demands, especially from the United States, to confirm commitments to the defense of Lithuania. One also wants to ask those demanding that if there aren't commitments then is it their understanding that we won't defend our country and its independence?

That again is a separate topic. Do the figures mentioned in the beginning of the article correlate? In all likelihood yes. The accent is just on the contradiction, the necessary material basis and the escalation of persistent anxiety (sometimes as I have said one that is completely unfounded), that undoubtedly draw material resources (and efforts) from other areas. That that in turn is somehow something we don't want and which adjusts the second figure which, for me at least, is very distressing.

Coming back to the beginning. Perhaps my conclusions are too far-reaching; perhaps they will say that in the name of Lithuania I could just not say anything. I think, the opposite: that in the name of Lithuania, the future of which concerns me, no less than it does the foreign policy-makers and expert advisers, I did not have the right to express my perhaps too subjective and even controversial opinions.

Why is it that so many Lithuanians won’t rush to their country’s defence?