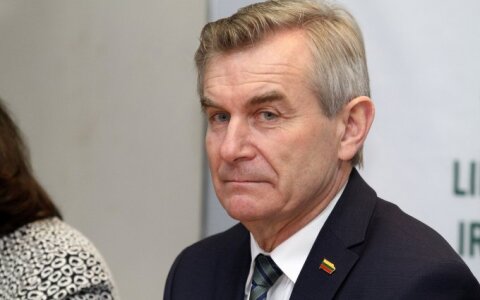 "The Knesset chairman said it would be great and it was an aspiration, this should probably become reality. This would give a spur to tourism," Pranckietis told journalists at the Lithuanian parliament on Wednesday after meeting with Edelstein.

In Pranckietis' words, about 20,000 tourists from Israel visit Lithuania every year.

"Our people could also go there for the warmth. As they said in an informal conversation – when our sea is the warmest, theirs is the coldest. Our people could extend their holidays and summer in that country," the Lithuanian parliamentary speaker said.

Security situation and economic cooperation were high on the agenda of the meeting with the Knesset speaker, said Pranckietis, noting Lithuania was interested in future imports of liquefied natural gas from Israel.

"They have gas deposits, we buy gas, we want our people to be able to get heating at a low price. If they offered a good price, it would be great," he added.

The Lithuanian parliamentary speaker emphasized that he and the Knesset leader had the same stance on the situation in Ukraine.

"Of course, we touched upon the Ukrainian issue. They also stand in solidarity with Ukraine, refusing to recognize annexation of Crimea, they know that the problem should be resolved in one way – territorial integrity of Ukraine," said Pranckietis.

Lithuania also asked Israel to support its position on the Astravyets nuclear power plant under construction in Belarus close to Lithuania's border, as Lithuania considers it unsafe and does not want other countries to buy its energy.

Edelstein, in his turn, volunteered to share his experience on communication with diaspora abroad. He also suggested holding video conferences between parliaments.

During the three-day visit in Lithuania, the Knesset speaker met with Lithuanian President Dalia Grybauskaitė and Prime Minister Saulius Skvernelis, visited the memorial to the Holocaust victims in Paneriai, outside Vilnius, as well as the Jewish Community Center and Sholom Aleichem ORT High School in the Lithuanian capital.

Lithuania is one of the strongest European supporters of Israel in the international diplomatic arena. Lithuania in 2011 was one of just 14 countries that voted against Palestine's UNESCO membership. The Baltic country last May voted against a UNESCO resolution condemning Israel's actions in Jerusalem and the Gaza Strip.