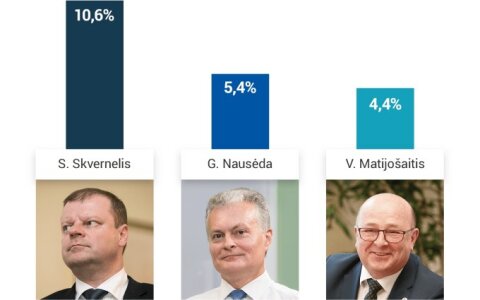 In the survey, more than 1,000 Lithuanian residents were asked to specify a person they will vote for in the presidential elections in 18 months, however, they were not given a list of candidates.

Just over a tenth of those polled specified the prime minister delegated by the ruling Lithuanian Farmers and Greens Union. Skvernelis, the former police chief and former interior minister, was more than two times ahead of the nearest competitor.

Nausėda, SEB economist, was specified by 5.4 percent of those polled and Matijošaitis was listed by 4.4 percent.

Nearly half of those polled (49 pct) said they did not know the candidate they would vote for or did not answer the question. None of the three specified persons have yet announced their plans to run for president.

Another 12 of public figures were mentioned by at least 1 percent of respondents.

After the top three, the list is continued by conservatives' leader Gabrielius Landsbergis (2.8 pct), however, he will not be able to join the race, as he will not be of the necessary age of 40, which is required by Constitution.

He is followed by former prime minister Algirdas Butkevičius of the Social Democratic Party (2.4 pct) and the party's MEP Vilija Blinkevičiūtė (2.2 pct).

Another 1.9 percent of respondents pointed to impeached ex-president Rolandas Paksas who cannot run for the President's Office by law.

The nearest presidential elections are scheduled for May of 2019.