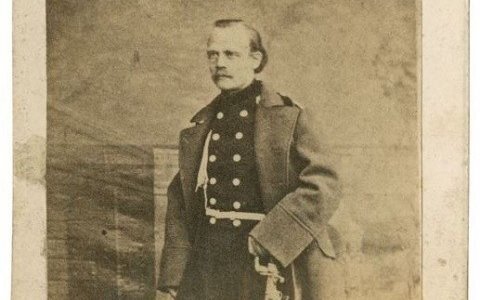 Researchers expect to confirm after genetic testing that the remains of Žigmantas Sierakauskas (Zygmunt Sierakowski) and Konstantinas Kalinauskas (Konstanty Kalinowski), the leaders of the 1863 uprising against Tsarist Russia, are among those found on the Gediminas Hill in downtown Vilnius, but say this would require additional funding.

Professor Rimantas Jankauskas of the Department of Anatomy, Histology and Anthropology at Vilnius University and his colleague Valdas Steponaitis on Monday briefed Prime Minister Saulius Skvernelis on the results of anthropological and archaeological research and informed him about the need to perform further research.

According to the anthropologist, researchers have no doubts as to the identification of the remains of Sierakauskas as they have found his engagement ring with the inscription "Zygmónt Apolonija 11 Sierpnia/30 Lipca 1862 r (Zygmund Apolonia August 11/July 30, 1862)", but generic testing is needed to identify the remains of Kalinauskas and other insurgents.

"Their genetic identification may cost a considerable amount of money, but not hundreds of thousands (of euros)," he said.

A government commission will decide where to rebury the remains.

"We will do our best to ensure that these tests are carried out as soon as possible. This is important not only for Lithuania. This is also a part of history of Poland, Belarus and Ukraine," Deividas Matulionis, an advisor to the prime minister, told reporters.

Scientists last summer announced having found the remains of participants of the 1863-1864 uprising, most of them buried without due respect, with their arms tied behind their backs and their bodies covered with lime. It has been already established that the remains are those of insurgents executed in the Lithuanian capital's Lukiskiu Square.