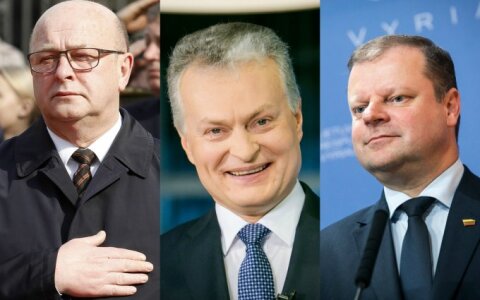 Lithuanians want an oligarch, they would be prepared to vote for Kaunas Mayor Visvaldas Matijošaitis in the presidential elections if he runs.

Meanwhile other business representatives currently do not have any great chances in the presidential elections, political analyst Vytautas Bruveris and political scientist Bernaras Ivanovas state LTR.lt. "Lithuania is a typical society of this world in the sense that it needs a patron, an owner. They imagine that if the person earned millions and drives an expensive car, he will also be able to fix their livelihoods," V. Bruveris tells LRT.lt.

Voters would most be interested in supporting Prime Minister Saulius Skvernelis, followed by economist Gitanas Nausėda and Kaunas Mayor Visvaldas Matijošaitis in the presidential elections to be held in a year and a half, according to a number of opinion surveys. In them voters also mention the names of former European Union ambassador to Russia Vygaudas Ušackas and Confederation of Industrialists head Robertas Dargis.

Most of these politicians either come from business or are directly related to it. Would Lithuanian voters support a business representative following five years of growing income inequality? According to Eurostat data, income inequality in Lithuania is the highest in the EU. Five years ago the bottom fifth in earnings and top fifth in earnings were separated fivefold. Meanwhile in 2016 this difference reached sevenfold. Would Lithuanians elect a businessman despite such inequality?

Political analyst for the Lietuvos Rytas newspaper V. Bruveris is convinced that Lithuania would certainly not shun a businessman because apparently Lithuanians once more need an oligarch, similarly to how the 2004 Seimas elections were won by the Labour Party with its long-time leader Viktor Uspaskich at is head. "Lithuanians need a noble from Kėdainiai once more," V. Bruveris believes.

Vytautas Magnus University (VDU) political scientist Bernaras Ivanovas agrees that the business background did not disadvantage V. Uspaskich, he appealed to the "working people." However the political scientist points out that people do not elect millionaires into the post of president.

"There are many similar examples. There have and will always be millionaires in our government, but the post of president was usually taken by people with a certain value position. Even Rolandas Paksas entered power by declaring a value principle, namely not signing and not allowing private capital to take over pensions. He shed a tear regarding the Williams story and said that he will not hand over half a billion of pensioners' money. It was an anti-capitalist, anti-establishment step. We have not had capitalists in the post of president – Algirdas Brazauskas, Valdas Adamkus and Dalia Grybauskaitė have all been value based leaders," B. Ivanovas said.

Meanwhile another VDU political scientist Lauras Bielinis believes that Lithuanian voters could vote for a businessman too if he turned to the people and wasn't only acting in self-interest. "I believe that if an individual from a business background reveals his personality and not only concerns himself with his professional work and interests, he could receive votes. I believe that Lithuanian voters would choose the person if he has a broader view of Lithuania. In such a case it would become irrelevant if he's a businessman or not," L. Bielinis explained.

"I would separate V. Matijošaitis from these candidates because he made the appearance as a successful mayor of Kaunas. He already is a politician, even if he perhaps won the mayoral elections with the story of a successful business. I would doubt the chances [to win the elections] of the other candidates because a major discussion may arise, as to what the role of business is in Lithuania, what the role of the banks is. Mr. G. Nausėda is faced with increasing criticism for the changes in his position from a very liberal and pro-bank one. He was the representative of one of the largest commercial banks in Lithuania, of certain opinions, a press representative. And now he begins talking about poverty, social segregation and other things, which show that he is seriously considering running for office," T. Dapkus said.

According to the expert, G. Nausėda's participation would raise a discussion over the influence of commercial banks in Lithuania, their activities during the crisis years. These issues would likely strongly decrease G. Nausėda's chances to perform well in the elections. "He is currently presented as an economist, seemingly creating an illusion that he is an independent speaker. But we have to consider that he is actually representing the interests of one of the largest commercial banks in Lithuania," T. Dapkus added.

Political analyst V. Bruveris says that for now the absolute favourite among the candidates is V. Matijošaitis. "If he participates in the elections, he will win them. That is absolutely clear. I believe that V. Matijošaitis is the symbol of the image the public needs the most – non-partisan, not stained by everyday politics. [...] As for G. Nausėda's presence in the top three, it comes as a sort of surprise for me, I find it odd why he is one of the most popular potential candidates to the post of president because in my opinion a "slick" banker, bureaucrat should be one of the most disliked candidates to the post of president. V. Matijošaitis is what the nation wants," V. Bruveris told LRT.lt.

VDU political scientist B. Ivanovas says that V. Matijošaitis indeed does have potential in the presidential elections, however it is a questions whether he will be willing to run for the office. "I do not believe the other mentioned candidates will be voted for. Most likely we will have a president or a duel between candidates, who we do not yet see. These candidates being suggested right now will likely not even reach the finish line," B. Ivanovas explained.

Lietuvos Rytas political analyst V. Bruveris believes that V. Ušackas is also a business representative, "From what I have heard, he actively worked with business, one could say that he is the first of the potential candidates to begin his campaigning. [...] Some people say that V. Ušackas has secured the support of big business. However in my opinion he is not one of the favourites we could talk about. He seems too much of a eurobureaucrat."

According to political analyst T. Dapkus, V. Ušackas should answer this main question – whether he has any connections with Gediminas Žiemelis and if he will finance V. Ušackas' electoral campaign. "This is a fundamental question that needs answering. It is clear that V. Ušackas has many business connections, but not all of them are particularly transparent. There is no doubt that more explanations and answers will be needed regarding V. Ušackas, how much and what business will support him in the campaign," T. Dapkus told LRT.lt.

Meanwhile political scientist B. Ivanovas says that the head of state has few powers to aid business and apparently it would be difficult to spot business groups which would support someone in the presidential race.

The presidential elections are to be held in May 2019 in Lithuania.