Leftist manifesto: life would change for both employees and oligarchs 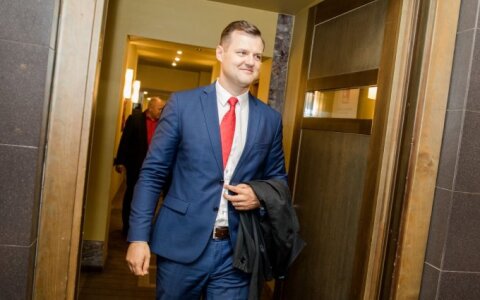 Following the departure of nine veterans, Gintautas Paluckas' Social Democrats are aiming to turn even further toward the political left and include more attention to employees, as well as raising questions linked to human rights, such as legalising civil partnership between same sex couples, among their political aims.

During the Saturday party council meeting G. Paluckas described the nine party members, who were unwilling to conform to the party's will, leaving as the end of an era. The guidelines for the new era under his leadership was presented in the manifesto "For a just, prosperous and united Lithuania."

The document states that the "LSDP must turn to contractors", while regarding large businesses it writes that "in a capitalist society it has no other mission than the unending pursuit of profit for private investors." The term "oligarchisation" is used, which apparently "boosts citizen's distrust for their state and opportunities."

G. Paluckas assured that the terms were chosen intentionally for the document in order to display the party's value position.

"I believe that many have noticed that business and capital relations with the public and the individual, their evaluations, the formulation was chosen intentionally so that the position isn't lukewarm. For a long time politics in Lithuania has predominantly been completely compromised. One can hide everything beneath ambiguous positions, both a leftist and a right wing stance. Leftist views are clear in the manifesto," he said.

To the former party members' criticism that there is too much of a shift to the left, G. Paluckas responds that it is not without their fault that the LSDP is criticised for not being a leftist party.

"The Social Democrat Party is accused of not being social democrat, not being leftist and only bearing the social democrat name. To a great extent it is namely our former fellows who are to "thank" for this. So when they say that the manifesto is too radical or too leftist, it sounds like a compliment," G. Paluckas said.

Unconvinced the party is being renewed

"It is not enough to pluck the wilted roses for the party to renew itself, it is necessary to also think where to get new ones and how to nurture new roses which would later bloom," R. Urbonaitė spoke in metaphor.

The political scientist is still unsure who stands next to G. Paluckas and the manifesto content itself was not enough to convince her either.

"While the manifesto itself is a solemn statement, if we are to only look at the word content and meaning, what the definitions are, then the solemnity is not found here. I do not know, perhaps this is not the final variant, but if it wasn't the final, then why release it like this? Because the content so far has not told me anything new at all," R. Urbonaitė said.

According to the political scientist, earlier Social Democrat programmes have contained leftist policy stances, promises of progressive taxation, to give an example.

"The problem is that the left is only on paper and earlier it had nothing to do with reality. Accenting leftist leanings is nothing new on paper for the Social Democrats, just that this manifesto especially highlights it, as well as clearly attacking the wealthy," R. Urbonaitė said.

A turn to the left

Meanwhile MRU professor Andrius Bielskis observes the aim to use the manifesto to declare a new direction.

"There is talk of the need to turn to the working, to common working people and that the contemporary neoliberal economic policy context has created massive inequality in Europe and other European and Western societies over the past 20-30 years and that now a strong social democratic breakthrough is needed," A. Bielskis spoke.

The political scientist views the manifesto positively and is surprised that, according to him, a number of commentators do not realise what G. Paluckas is doing.

"He is seeking real renewal. A similar movement toward true social democracy and leftist economic policy can be noted in the most advanced states in the world, both the USA and the UK," A. Bielskis says.

According to him, the domination of right wing views in the ranks of the social democrats has pushed them into crisis in most states.

"Due to people ranging from Kirkilas and Butkevičius, to Hillary Clinton and Tony Blair, due to whom social democracy has been dominant for the past 20-30 years, social democracy or socialism as an independent ideology is ceasing to exist in various countries. They are being pushed out because they are no different from their opponents. Moving toward the centre is disastrous to social democracy and G. Paluckas understands this well," A. Bielskis said.

In the manifesto "For a just, prosperous and united Lithuania", the Social Democrats include promises to strive to change the Constitution and legalise dual citizenship, grant more power to municipalities, communities and private initiatives, legalise civil partnership for same sex couples.

The Labour Code is described as liberal and the Social Democrats promise to monitor the situation in the labour market carefully and represent the employees and unions.

The document talks about the need to form collective work contracts in all areas curated by ministries, as well as all state and municipal companies. It also discusses union rights and intentions to simplify strike declaration procedures.

The Social Democrats promise to review the social security system because the 2004 private pension system has apparently not been justified. "Private pension funds that state funds are transferred to now do not ensure the dignified retirement of future pensioners and at the same time reduces the state's financial capacities to ensure adequate current social insurance for retirees. While there is a need to create conditions for private voluntary insurance to function, it cannot be done at the private sector's expense," the document writes.

The Social Democrat document describes the Lithuanian Farmer and Greens Union proposed tax reform as superficial. According to the Social Democrats, citizen income taxation has to be decreased by progressively increasing income tax tariffs for citizens receiving high incomes and reducing it for those earning the least.

The Social Democrat manifesto proposes to establish progressive taxation which are seen as a means to reduce social inequality and segregation.

The Social Democrats also propose a 5% increase in corporate profit tax, from the current 15% to 20%. They note that this tax generates twice the revenue that income tax does, that is around 8%.

The LSDP proposes to leave the existing 5% and 0% exemption tariffs for companies that have made use of them so far.

The Social Democrats also believe it would be justified to tax luxury property such as cars and real estate.

They support the 100 euro "child's money" grant for all children, irrelevant of the family's income and support the minimum monthly wage being indexed and reaching 50% of the average countrywide wage.

Leftist manifesto: life would change for both employees and oligarchs