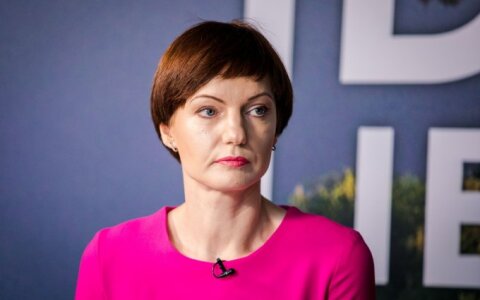 Rūta Vanagaitė thought she would advertise her new book by slandering partisans, while Gintautas Paluckas and his entourage are using R. Vanagaitė's scandal to announce their shift to the left because they lack any real means to affect political decisions.

After departing the coalition, getting rid of the old social democrats and gathering a new Social Democrat group in Seimas at great difficulty, G. Paluckas has begun the LSDP's drift to the left from a very dangerous thing – patriotism and questioning attitudes to defence. The new passionate leftists are making use of textbook left wing ideology, completely disregarding Lithuania's specifics and the difficult security circumstances it is placed in.

Related articles
Public letter by R. Vanagaitė: I admit I was mistaken
The future of Lithuanian social democracy is cared for

The views of European leftist liberals are being transferred directly to Lithuania. They often have no understanding of how contemporary Russia is put together, ruled and how it disregards individuals, literally killing those thinking otherwise. These leftists do not understand themselves why they view it positively.

"Paluckian social democrats are perhaps the only ones who took to defending the disgraced author. By various arguments. From this we find out that we have a real new Left. Westernised which will defend the Soviets, communism, Lenin, Trotsky, Dushansky not because they need gas from Moscow, but from the heart. Because such are their views," philosopher Vytautas Ališauskas wrote on Facebook.

G. Paluckas' statements were accompanied by the odd text by Artūras Rudomanskis, who hallucinates the conducting hands of the right everywhere and no less peculiar comments by LSDP communications head and G. Paluckas' right hand Eglė Samoškaitė.

That the new real left began swimming against the stream and gather political dividends is nothing sensational, their statements about poverty and segregation contain much truth, however it is unclear why the two problems of defence and social issues need to be contrasted. And some of their notions on security are cause for concern.

"Oh and there was the Zapad exercise which was a very serious phenomenon, but you know, when you always uncontrollably fear attack, then that is all you do all the time and your mind does not function," E. Samoškaitė writes on Facebook, while A. Rudomanskis continues: "Let us recall for example the most advertised in Lithuanian communications history military exercises Zapad which likely succeeded far more than those ill-intending could have imagined. Everyone became afraid to the point that even those intimidating even up to the minister level came to their senses and began to calm that "hey.... We're courageous, strong, agile and definitely fear nothing, we have NATO and other allies."

True, how excellent, Zapad succeeded more – this means that despite the incidents of violating the Lithuanian border and other provocations, this time the Russian army did not remain in Belarus or did not march into somewhere further.

But likely it was no accident that the USA strengthened its intelligence and combat capabilities in the region, NATO deployed international battalions in the Baltic area and Sweden organised the largest exercises since the cold war, imitating Russian aggression?

There's no reason to tremble in fear – there's no need and no-one is trembling, I believe that the relevant state structures and professional troops did and continue to do their work, however the public has to be informed about real threats and understand it is no joke.

It is important to understand that at the same time the messages also reach the Western audience, this way maintaining its attention on an important problem for us, though the Kremlin would of course be very glad for it to divert to other questions, ones it gladly contributes to escalating – refugees, Syria, Brexit, Trump and others. The same Kremlin, after sabre rattling prior to Zapad is afterward ridiculing the fears of the Baltic States and NATO.

"When the Estonians which the right wing so deifies announce to the world supposedly "Estonian" innovations, we likely can only tell the world about Russia's military threat," A. Rudomanskis continues.

Lithuanian leaders, diplomats and military officers publically and in the background loudly raise the question of the Russian threat, aiding the entire region this way. Who knows, would NATO battalions be deployed in the Baltics without these efforts?

In recent times G. Paluckas' statements on the topic of security also make one raise an eyebrow. Take late September when in defence of the scandalous and pro-Russian position of Vytenis Povilas Andriukaitis he wrote that the security of Astravyets NPP will not change, regardless of whether Lithuania buys its electricity or not.

Later G. Paluckas stated that when Lithuania reaches 2% GDP defence funding next year, it should not rise further, instead the funds should be directed to reducing social segregation.

It is obvious that Lithuania must strengthen its economy, education, resolve social problems, only a healthy organism will be resistant to threats, however everyone understands, after all, that these are not short term processes, by the way neglected by Lithuanian politicians.

Meanwhile the military threat is very tangible and real and decisions regarding it must be made right now. And let us not fool ourselves as A. Rudomanskis writes that "the Kremlin and Putin is not all of Russia yet." Yes, not all of it, however that regime has the earnest support of most Russian people, Putin's ratings are exceedingly high and imperialism is firmly entrenched even in many opposition figures and so far there's no light to be seen at the end of the tunnel.

"We can understand how the Lithuanian public looks from the side. And it appears as a frightened, oppressed and fanatical rural community after catching a horse thief and intent on teaching him a lesson. Teach so that he does not forget for the rest of his life," E. Samoškaitė writes regarding R. Vanagaitė's scandal.

No, it does not appear frightened, oppressed and fanatical. There will always be radicals, just now they have more room for expression. Disregarding individual radicals, the scale of the overall reaction to R. Vanagaitė's slight revealed that Lithuanians are maturing as a nation because they understand on what statehood is built and oppose attempts to dismantle it. And we cannot compare R. Vanagaitė's case with Juozas Statkevičius' nonsense or the lame song by Stano and Zvonkus, these are incomparable matters.

"HHe is seeking real renewal," MRU professor, philosopher Andrius Bielskis, one of the architects of the Social Democrat manifesto, commented about Gintautas Paluckas.

Will this be that LSDP renewal? Lacking responsible attitude, pandering to voters nostalgic for Soviet times and business which misses Russian markets?

Perhaps this is why the LSDP manifesto has no mention of defence? Or perhaps there's no reason to write a section for it? G. Paluckas could be aided by former Minister of National Defence Juozas Olekas, he certainly knows the real threat well because he led the ministry for a number of terms, true, not without shady dealings, as the president said during the "golden spoon" scandal, which later became one of the reasons for the Social Democrat electoral loss.

"Algirdas Paleckis will like Gintautas Paluckas' party better than the previous one," Gediminas Kirkilas told Tomas Dapkus during an interview on InfoTV and added that "there is no leftism here. Let us be leftist in social and economic policy – to change Lithuanian foreign policy, the real reason is here." The scandalous, openly pro-Russian and marginalised A. Paleckis is, by the way, an old companion of G. Paluckas from the times of the LSDP Vilnius branch. In 2006 they, together with late J. Požėla, as Veidas writes, "organised a revolt in the LSDP Vilnius branch, after filling it with new members, almost with a Jedinstva past, overthrew the experienced politician Algirdas Kunčinas."

G. Kirkilas is of course not neutral in his evaluations of G. Paluckas and the LSDP he's left, however there's truth to his words.

While various research shows that foreign policy and Russian threats are currently not of primary importance to the citizens, but politicians' duty is to think of the state, not populistically. If they always adhered to research, then likely Lithuania wouldn't have even entered NATO.