Faina Kukliansky: Jews and Lithuanians must smooth their disagreements 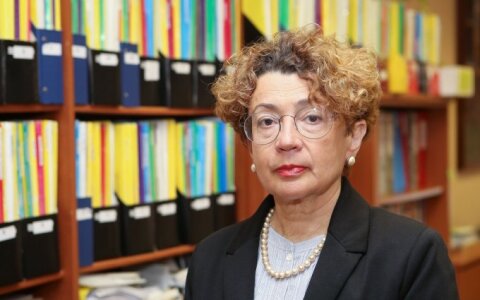 Though the scandal caused by author Rūta Vanagaitė's statements about partisan leader Adolfas Ramanauskas-Vanagas has subsided, the head of the Lithuanian Jewish Community Faina Kukliansky believes that this calm is only temporary. The English translation of R. Vanagaitė's book Mūsuškiai should appear soon. Furthermore she has the support of the European Jewish Congress, she has many supporters in Israel. In an interview with LRT.lt F. Kukliansky advised to not fear the potential scandals.

"I really like the thought of historian Saulius Sužiedėlis that one can read a document a number of times or many documents and reach different conclusions. While studying documents one needs special preparation, expertise in them. If the same documents are read by an elderly lady, they may appear interesting to her, but she will be unable to explain anything. And if a book is written for public relations, it seeks benefits and to surprise readers and listeners?" F. Kukliansky responded on the aftermath of the R. Vanagaitė scandal in her interview with the LRT.lt news portal.

She points out that a specific opinion has formed regarding R. Vanagaitė and her words will find little traction in Lithuania, but when this is taken abroad, people would likely think that there are attempts to deal with her.

"Because how can you not support a Jew writing about the Holocaust in Lithuania?

In my opinion when reading books such as R. Vanagaitė's Mūsiškiai or the like, a person needs to be prepared for it – having read further books and articles on the topic and perhaps having learnt about it in school.

When people know little of the relations between Lithuanians and Jews and the Holocaust and then read something like Mūsiškiai, an explosion happens," F. Kukliansky stated.

In terms of the Jewish community's reactions to it being revealed that R. Vanagaitė's claims were false, F. Kukliansky noted that the pains caused by the Holocaust remain, with most any family in their community having been impacted by the Holocaust and it will still take further time for the wounds to heal and cease aching. She points to a personal example where she still does not understand how her father, a survivor of all the horrors of war at the Palanga children's camp where only three Jews survived by a miracle, would visit Palanga for his holidays every year. At the same time she points out that most of the Lithuanian Jewish community know that it was not all Lithuanians who were responsible for the killing of Jews, even if some were

The head of the Lithuanian Jewish Community stresses that it is necessary to reflect on the past once more from an objective and fair standpoint, as opposed to Soviet-era stereotypes, when the authorities put emphasis on presenting the Lithuanian partisan resistance as groups of bandits.

For comparison sake she asks what we would do today, if the government directed to refuse Jews, Tatars and other minorities employment. F. Kukliansky notes that we constantly remember and commemorate the victims of terror attacks or the two world wars, but forget other contemporary problems linked to minority groups. Little can be done about this as long as young people have little knowledge of historical places in or near their home towns, such as the Vidzgiris Forest near Alytus where Jew shootings were done.

The Lithuanian governments have not done enough according to the head of the Lithuanian Jewish Community. While a de-rehabilitation law was enacted at the great efforts of her and her father Samuel Kukliansky, it does not appear whether the process was truly completed because the Prosecutor General's Office no long even has a department linked to the task.

Regarding the contrast where some Jews collaborated with the USSR regime and participated in the signing orders for execution and Siberian exile, F. Kukliansky admits that it is hard to say what to answer to this, for example the case of KGB officer Nachman Dushansky who both signed off on the exile order for Kaunas doctor Isaak Levitan and his wife, as well as creating the execution scenario for A. Ramanauskas-Vanagas.

"If even more than seventy years after the war we continue to talk about it, then it means it still hurts, it has not been forgotten.

I still recall how we played a game with our cousins at our only surviving grandmother's home in Vilnius Old Town after the war. The game was who was least like a Jew and what would need to be done if the Germans came again. Why we played this way, I do not know because our parents would never talk to us about the Jewish massacres," she recalled, explaining that her eyes were opened to the tragedy which befell the Jewish community in eleventh grade by dissident historian Vytautas Raudeliūnas. Her own father only spoke up about the tragedy once a number of those who killed Jews were rehabilitated after independence was re-established, only then finding out that the stairs up the Tauras Hill were made from Jewish gravestones, finding out about the Simon Wiesenthal Centre and Efraim Zuroff.

F. Kukliansky finds that E. Zuroff likely has his controversial reputation due to his abrasive character or perhaps in an effort to draw attention. She adds that he is a religious individual and their opinions diverged on a number of questions from the beginning of their acquaintance.

"This is because I always held the opinion that all problems must be resolved officially and legally. I thought that if E. Zuroff wants to do something in Lithuania, it is necessary to establish a representation for the S. Wiesenthal Centre, cooperate with the prosecutors, participate in the court processes. Why must one be enemies with everyone?

Though If the Minister of Education and Science Jurgita Petrauskienė continues to ignore my calls, won't resolve the problem of the Kėdainiai synagogue repairs, we will have to raise a storm.

After all 600 thousand euro was received from EU structural funds for the synagogue repairs. The same story happened with the Kaunas Jewish community which was returned the building that used to belong to the Arts Academy twenty five years ago. Due to some sort of bureaucratic misunderstandings we still are unable to reclaim the building," F. Kukliansky stated. As for why the Kėdainiai synagogue repairs were the issue of the Ministry of Education and Science, the head of the Jewish community explained that both the ministries of culture and finance directed her thus, for whatever reason.

While S. Sužiedėlis has prepared a book that goes into detail on Jew shootings in Lithuania and how both Lithuanians and Jews suffered from Jewish KGB officers, F. Kukliansky notes that such topics leave her thinking, how must one speak about polarising figures?

"How do I talk of poet Vytautas Mačernis who is revered by Lithuanians, knowing how anti-Semitic he is? Or perhaps he only spoke this way in a single letter which cannot characterise him?

I do not have a clear answer regarding the views of Jonas Šliūpa. Was he really an anti-Semite?

But I know one thing – for all of us, Jews and Lithuanians, we need to smooth the corners of our disagreements. We cannot seek revenge or blood.

However I do not think that the parade held in Molėtai, which commemorated the Holocaust, is more worthy than me visiting Katkiškės near Veisėjai, where twenty nine members of my family were killed and only three remain of the Jews stemming from there – me, caricaturist Ilja Bereznickis and my secretary.

Living through my pain, I do not need the parades and the pomp. I believe that my parents would also not have needed it," she stated.

When asked whether her family associated with Lithuanians after its tragedy and did not feel vengeful, F. Kukliansky explained that they had friends both among the Russian and Lithuanian intelligentsia, but there was never a desire to have vengeance for the lost family or property. "Perhaps people need to let go of their feelings, experiences. After all one cannot suffer all their life. You have to live on," she concluded.

As for future generations and how they could reach full reconciliation between Lithuanians and Jews, F. Kukliansky noted that it is important that Lithuanian schooling begins to include the history of Lithuanian Jews as well, presenting how the Jewish community found its way to Lithuania, how it lived here and why they were met with tragedy. In terms of actual legislation, she noted that while it is only her personal opinion, she feels protected by the Lithuanian Constitution, the Penal Code and other laws and feels little need for a further Ethnic Minority Law.

Faina Kukliansky: Jews and Lithuanians must smooth their disagreements