Lessons from Norway in a rapidly changing energy world 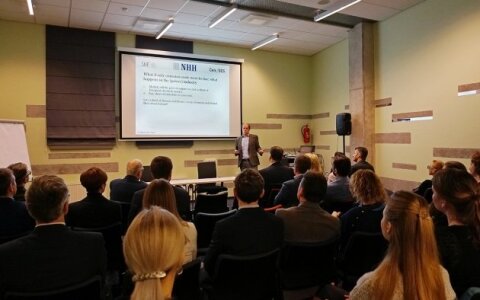 The Norwegian Embassy in Lithuania in cooperation with the Norwegian Chamber of Commerce hosted on Friday morning a presentation in the Comfort Hotel in Vilnius that allowed for a peek into the various parts that are transforming the energy puzzle. After opening remarks from Anne Sofie Bjelland, the Norwegian Chargé d'affaires, three specialists addressed innovation from very different angles and tackling very diverse aspects of changes affecting energy production and consumption.

Few economic sectors can rival energy in being shaped by a plethora of government actions. Technological innovation, environmental, and societal needs combined with behavioural factors make for an interesting mixture of strategies for decision makers. Lessons can be learned from Norway, a country at the forefront of energy production but also in changes in energy consumer preferences.

Professor Gunnar S. Eskeland of the Norwegian School of Economics presented some of challenges in the mixture of subsidies, taxes and emission costs that shape the production and energy consumption. The environmental economist was critical of political induced inefficiencies that may negatively affect consumer prices as the world transits from fossil fuel to clean and renewable energy. .

Professor Eskeland's view in handling new developments takes in more than just environmental needs. The share of traditional energy versus renewable or green power differs substantially from one geographic location to another. He described Norway as a place being blessed with options, including an abundance of hydro electricity. Therefore, it is able to handle the transition in a very different way than places like Germany, a country still very reliant on fossil fuels and energy imports.

Mr Mindaugas Petrauskas, Managing Director of Hoegh LNG Klaipėda, provided a global view of the LNG market development and its impact on the transformation of the Lithuanian gas market. New installations are being built to transport, store, and liquefy gas all over in a global setting with plenty of growth potential over the next decade. Mr Petrauskas explained how the LNG terminal in Klaipėda now receives gas from several countries and exports gas to Sweden and Poland as well as to Estonian ferry operations.

Mr Petrauskas, who is also the Norwegian Honorary Consul in Klaipėda described how after recent increases in gas prices, Lithuania still enjoys lower prices than the EU average. Few EU countries have seen their energy prices more dramatically affected than Lithuania after successfully decreasing the power of the Russian monopolist supplier in this country.

Mr Tomas Deržanauskas, Managing Director of Møller Auto VW, presented the view from the consumer front line. Attitudes and government policies affect consumer choices and today 20% of all new cars sold in Norway are electric vehicles. This has happened much faster than anybody could have imagined just a few years ago. Add to this reality, the backlash against diesel and the way connectivity and mobility allow for changes in consumer behaviour.

More mobility, yet less direct ownership of cars, is rapidly changing the car industry. Mr Deržanauskas expects more change in the next decade than in all of the previous century combined. Car companies, and in particular those that operate vast networks of traditional service operations - often a major contribution to profits - will need to learn to adapt fast. His company's programme RACE is aptly used as an acronym dealing with these rapid changes. Disrupters seem to leave few industries untouched as technology and innovation moves forward at an accelerated pace. The car industry is certainly no exception.

Lessons from Norway in a rapidly changing energy world