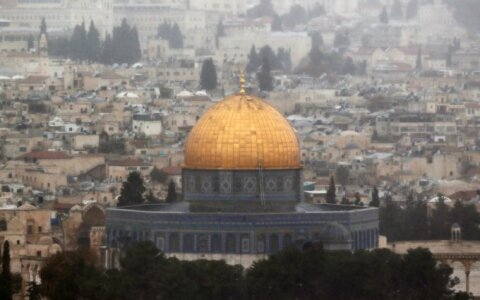 US President Donald Trump's recognition of Jerusalem as Israel's capital will escalate the situation in the region, Lithuanian Prime Minister Saulius Skvernelis said on Thursday.

Related articles
ForMin Linkevičius against unilateral actions ahead of Trump's decision on Jerusalem
At Lithuania's initiative, Israeli PM gets historical invitation to Brussels

"The (US) administration apparently weighed all the pros and cons, but in this case, it is a decision that will escalate the situation, which is the last thing that is needed there," he added.

Trump announced on Wednesday his decision to recognize Jerusalem as the capital of Israel, despite calls from US allies and Middle East leaders not to do so.

The president also kicked off the process of moving the US embassy from Tel Aviv to Jerusalem.

The status of Jerusalem has been a source of contention for decades. The Palestinians also claim it as their city. Much of the international community do not officially recognize Jerusalem as Israel's capital and say that its status should be decided through negotiations.