Grybauskaitė doesn't criticize, nor back Trump's move on Jerusalem 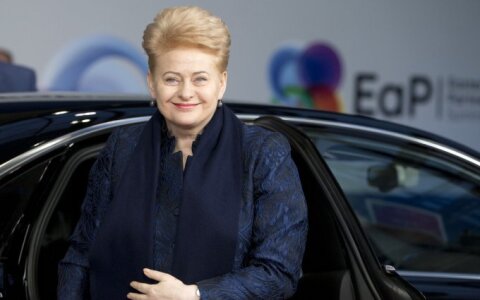 Lithuania's President Dalia Grybauskaitė has refrained from public criticism or support to US President Donald Trump's decision to recognize Jerusalem as the capital of Israel, only restating her call to continue the peace talks in the Middle East.

"The status of Jerusalem is a sensitive issue in the Middle East peace process. Peace talks is the only way of ensuring harmony and safety," Grybauskaitė said in a brief comment provided to BNS by her press service when asked to specify her opinion on the US president's decision to recognize Jerusalem as the capital of Israel and move the US Embassy in Israel to the city.

The Lithuanian president's rhetoric on the matter is milder than that of other leaders of European Union (EU) member-states.

Lithuania's Prime Minister Saulius Skvernelis was also more critical than Grybauskaitė – in his words, Trump's decision may trigger new tensions in the region.

"I don't think this decision will contribute to ensuring peace in the region," Skvernelis told Ziniu Radijas news radio on Thursday.

Rasa Jakilaitiene, spokeswoman for Lithuania's foreign minister, told BNS on Thursday: "The position of the Ministry of Foreign Affairs remains unchanged – the conflict will still need to be addressed by way of dialogue and negotiations in the future."

Grybauskaitė doesn't criticize, nor back Trump's move on Jerusalem