Indrė Makaraitytė. Who will ride the Vytis to the presidential elections? 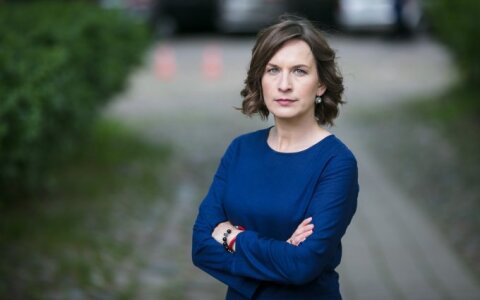 The Seimas State Historical Memory Commission announced this week that it will seek a Seimas ruling that the Vytis should be placed in Lukiškių Square. Not only "Farmer" historian Arūnas Gumuliauskas stands behind this initiative, but also Conservatives Audronius Ažubalis and Laurynas Kasčiūnas.

Could it ever be otherwise if it is already clear that the new president will ride into Daukantas Square on the Vytis' back? Whether having tossed the rider aside or tucked in beside him – Lithuanians do not delve into the subtleties of form and content. Lithuanians care most about įtaiga [suggestion].

What is suggestion? A definition was offered by one of the Vytis' supporters – Act of Independence signatory Liudvikas Narcizas Rasimas: "We did not manage to build a monument to Romas Kalanta which should have symbolised the unbearable burden to the individual and the nation's preparedness to continue its struggle for freedom. Yes, the square was renovated beautifully, as it should have. But where is the suggestion? It doesn't exist. A monument is lacking."

Thus the nation, which has risen up for the Vytis, needs suggestion. And so far the absolute winner if Kaunas Mayor Visvaldas Matijošaitis.

The situation is completely paradoxical. The patriots and other right wingers now say that here, V. Matijošaitis asks for neither procedures, nor plays with commissions. If there is a serious matter, and certainly the Vytis is, he goes ahead and does it. For a time now these people would have never been able to utter such things because V. Matijošaitis after all calls former Kaunas mayor, Conservative Andrius Kupčinskas a complete loser and the Conservative rule of Kaunas – a disaster. V. Matijošaitis' organisation, along with R. Karbauskis' "Farmers", wiped the Kaunas Conservatives not only out of the city government, but also Seimas.

Just recently the right wingers and their supporters shot off angry remarks toward both. After all one's business is from Russia and with Russia, while the other, R. Karbauskis', also partially is such. After all during and after the elections, the Conservatives raised questions over R. Karbauskis' business relations with Russian oligarchs and brought forth various papers.

Oh how the world turns though – it turns out that both R. Karbauskis and V. Matijošaitis turn out to be patriots. One promised to build the dismissed rider by some sort of right wing modernist Arūnas Sakalauskas in Kaunas after making it threefold larger. The other went and publically began emphasising that there can be no hills in Lukiškių Square because this would oppose legislation. And the hill does clash with legislation – according to the Cultural Heritage Department, the Lukiškių Square must be a flat area.

But then there's also Saulius Skvernelis.

It appears that he realised he had not grasped the Vytis' importance to the presidential elections. Simply until the very moment when the competition results were announced, no-one realised that the new president would ride on the Vytis. Up to then it was a regular institutional competition which, bureaucratically looking, had to put things in their places.

Had S. Skvernelis realised all this earlier, there would have been no anuses and no artist insights, especially modern ones.

Thus the prime minister now says without joking, with a serious face that most likely nothing will be built in Lukiškių Square. Vytis has ridden off, the hill construction won't be permitted by patriots, future voters. And what is most interesting is how S. Skvernelis explains why nothing can go ahead in Lukiškių Square. It turns out that not because the state commission made the ruling. But because the opinion of the Seimas Culture Committee chair R. Karbauskis changed. Perhaps there would have been a Vytis in Lukiškių Square because, understand, he voted for the Vytis, but the Culture Committee performed an individual investigation and the concept changed.

Today the prime minister states that the Seimas initiative to demand for only the Vytis to be built in Lukiškių Square opposes legislation.

You say there' no logic here? Certainly no logic, not in terms of time, nor in terms of arguments. Today's logic is only one – the presidential elections and one of the most influential people holding the reins for the elections is still R. Karbauskis. Yes, tangled between Greta Kildišienė's friends and classmates, but he is the most influential in both Seimas and part of S. Skvernelis' cabinet, still able to easily drown S. Skvernelis best intentions.

MP A. Gumuliauskas certainly did not begin reviving the idea of the Vytis in Lukiškių Square without R. Karbauskis' instruction. Sometimes R. Karbauskis does not need to talk himself. What he is thinking is visible in his and his companions' actions and not words. Now in the Seimas the karbauskists and right wing patriots gathered, such as Žygimantas Pavilionis who still hopes to jump onto the Vytis, and will discredit S. Skvernelis cabinet commission's decision over the Lukiškių Square monument and will take the Vytis away from the prime minister at the most inopportune moment – during the centenary events which are to become his, as the head of cabinet, trampoline into the new elections. The minister of culture is also just a pawn in the great game. Her name will soon be forgotten by everyone.

Do you need another convincing argument, how fast and easy R. Karbauskis can drown S. Skvernelis? R. Karbauskis need only send some of his members of Seimas, such as Mindaugas Puidokas or Agnė Širinskienė and they present amendments to the citizen income tax which compensate major tax breaks that have been removed at the cabinet's initiative. The elimination of tax breaks for specific groups is one of the greater achievements of Minister of Finance Vilius Šapoka and the prime minister or so they would like to boast, but it turns out that R. Karbauskis' hands are so long that in reality this project was written by the Ministry of Finance itself for R. Karbauskis for the possibility of large farmers to write off land, even retroactively, into expenses.

Here's the lack of funding for children's vaccinations against meningococcus for you. How does S. Skvernelis' outrage appear in this context, that he will not tolerate blackmail and that there are no funds to raise wages?

But even that's not enough. R. Karbauskis with his Seimas Speaker Viktoras Pranckietis meets with V. Matijošaitis increasingly frequently. S. Skvernelis is irritated. He dislikes it because he understands that negotiations are ongoing. The Vytis is simply a tool. What is most important is to what extent V. Matijošaitis' price will rise thanks to the Vytis when the day to decide who rides into the elections comes.

As for all the civic group games, they are just a smokescreen. That said a very beneficial one to cover the big games or start games. Today it is likely no longer clear which fund is gathering money for which Vytis. Open up the pages of the two funds gathering money for the Vytis project. One is headed by Jonas Burokas, the honorary chairman of the Lithuanian Freedom Fighter Union, the deputy of the other chairman turns out to be Vilius Kavaliauskas, former advisor to once Prime Minister Algirdas Mykolas Brazauskas. The representatives of J. Burokas' fund explain that they have nothing to do with V. Kavaliauskas' fund. But the pages of both funds have the same rider by A. Sakalauskas. Or perhaps A. Sakalauskas can not only scale up his riders, but also clone them?

However ambiguously V. Kavaliauskas may be viewed, but his fund's public commission is impressive. Just consider the significance of V. Adamkus and many dissident, political prisoner and exile organisation representatives' names. Though on the other hand, for example Professor Vytautas Landsbergis already sees an element of conspiracy. He says that this was intentional, discrediting names appeared in the Vytis project so that the Vytis would no longer be built.

Whatever it may be, the funds are separate, but united through a single leitmotif – if you are against the Vytis, you do not love Lithuania.

For a time appealing slogans can be played with, perhaps more money will gather. But more observant individuals should have noticed that their love for Lithuania was cunningly made use of. Because however many times you repeat this mantra, it will not turn true. It never was and I hope never will be.

No suggestive monuments have ever saved Lithuania from occupation or betrayal, political cynicism and games.

Indrė Makaraitytė. Who will ride the Vytis to the presidential elections?