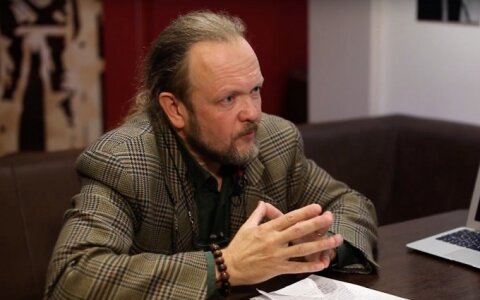 The Lukiškių Square was declared a representational state square in 1999. However every place, just as every individual has its own biography. It can be erased and hidden or it can display deep links to the present, R. Bogdanas writes on LRT.lt. So what is the history of Lukiškių Square?

The oldest use of the area is knwn from the 1582 chronicle by Maciej Stryjkowski, where it is written that from the cannon foundry (which was around the area of Tiltas Street) onward, a dark forest spanned along the Neris (Wilja) all the way to Lukiškės (Lukiszek), which was dedicated to gods of the home named Gywojtos [Gyvatės (Snakes)] and Ziemiennikos [Žemininkai], who would be fed there.

As such the hill, trees and their names, the land proposed as construction material by the first place winner is perhaps unexpectedly even for the author himself linked to the very oldest histories of Lukiškės. The edge of the hill reinforced by wood reminds both of a partisan bunker, as it does a cross section of a barrow, where based on an ancient Lithuanian tradition, those who died in the name of freedom were buried.

Lukiškių Square is associated with the struggle for freedom from the execution of 21 rebels of the 1863 uprising. The location of the execution was at the foot of the Pamėnkalnis, where a street and houses were later built and in the mid-20th century, Lithuanians mistakenly renamed it Taurakalnis.

The square was turned into a representational one by the Poles who occupied Vilnius in 1920. Józef Piłsudski named it Freedom Square. An obelisk to the rebels of 1863 was built at its centre. With J. Piłsudski's death, the square was renamed after him and a monument to him was built at the centre in 1936.

The Soviets came and renamed it after Lenin and built their own idol, Lenin, in the middle in 1952.

It is a very old tradition to cement a victory by remaking old heritage based on one's ideology. An excellent example is the Cordoba Cathedral in Spain which was remade from a mosque, which in turn was built by remaking an early Christian basilica.

Those who desire a Lithuanian sculpture instead of Lenin are following this ancient tradition. It is just as the new minting of coins when a ruler died.

The work of competition runner up Arūnas Sakalauskas "Freedom Warrior" is called the Vytis for some reason, as if any rider could be a heraldic figure. The Freedom Warrior name leans on J. Piłsudski's idea of the Freedom Square. To my knowledge, leaning on something is nothing new to this sculptor.

When he still taught in Telšiai, one of his students prepared a diploma project, originally interpreting K. Čiurlionis' Karalių Pasaka [Kings' Tale]. The instruction was to create a work on the topic of sports and he presented two individuals leaning over an empty chess board across from one another, explaining that these were two chess players. In Aesopic speech, the young author explained that from the Kings' Tale with the Lithuanian home, with the Soviets only an empty board in the Soviet paradise remains.

Unfortunately the student was unable to complete his diploma project because he was suddenly conscripted by the Soviet army for two years. He hoped to complete the work upon returning, however he received a letter from a course mate that lecturer A. Sakalauskas already realised the idea.

A. Sakalauskas' Vadovai appeared at the Klaipėda sculpture park, with two figures leaning over a table. Meanwhile after serving in the army, the student sculptor also finished painting at the Art Institute in Vilnius and is painter Saulius Mažylis.

The votes for the Lukiškės competition are counted, the winner is clear, but if it is so hard to make a decision for the decision makers today, I would recommend to return the square to August 23, 1991, when the crane lifted the sculpture of Lenin which broke off at the knees. And let movement end in that moment until there is a decision where to continue. The rusting crane line, on which the heavy statue will hang, will threaten to fall down and will force to finally take action.