F. Kukliansky: such good relations with Israel have not been seen since the beginning of independence 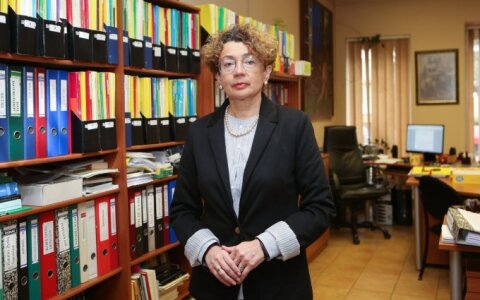 At Lithuania's initiative Benjamin Netanyahu has become the first Israeli prime minister after more than 20 years to visit the European Union, LRT.lt writes.

According to Lithuanian Minister of Foreign Affairs Linas Linkevičius, he was seeking direct talks between Israel and the European Union for a long time and Donald Trump's decision to move the US embassy from Tel Aviv to Jerusalem and recognise the city as the capital of Israel has added further relevance to B. Netanyahu's visit to Brussels, meeting EU diplomatic leaders. The chairwoman of the Lithuanian Jewish community told Savaitė that she is glad, Lithuanian – Israeli relations have never been this good over the whole period of re-established independence.

When the Israeli prime minister thanked Lithuania for the invitation to visit the EU, some analysts doubted it, perhaps B. Netanyahu made a mistake and had Estonia, which is currently chairing the EU, in mind. But it was no mistake – at the efforts of Lithuanian diplomacy, B. Netanyahu became the first Israeli prime minister to visit the EU in 22 years.

"I wanted this for a long time – direct contact," L. Linkevičius said.

Bilateral visits are being organised. Last year the president of Israel spoke at the European Parliament and met EU leaders, however a prime minister, who holds the true authority, has not visited since 1995 when Shimon Peres visited. The head of Lithuanian diplomacy emphasised that direct contact is crucial already in September during his visit to Israel, thus B. Netanyahu received an official invitation from Lithuania to participate in the foreign ministers' breakfast which is held prior to the official meeting. Apparently member states have the right to send such invitations unilaterally. It has been revealed that not all states approved of this, other than Lithuania it is Hungary, the Czech Republic and Greece that favour warmer relations with Israel, but others spare no criticism for the spread of Jewish settlements in Palestinian autonomous territories – the West Bank. The European Union – Israel association council where dialogue is held has not been convened since 2012. According to the head of Lithuanian diplomacy an open discussion would help clear up disagreements.

"It is no secret that there are disagreements, differences of opinion over a variety of issues – take the two Israeli and Palestinian states. Everything is known, but we must meet, talk, discuss and not just send press releases – that is also important, but direct contact is crucial," L. Linkevičius spoke.

Donald Trump also added importance with his decision to move the United States embassy from Tel Aviv to Jerusalem. Hence the European Union certainly had the opportunity to express its disagreement directly to Israel.

"The European Union believes that a two state solution would be a move toward peace and moves which complicate Palestinian-Israeli negotiations are futile. In my opinion while the meeting was organised before the US announcing its decision, it was held at a very suitable time and was crucial," Estonian Minister of Foreign Affairs Sven Mikser said.

The Israeli prime minister's urges for Europe to follow the US' example and recognise Jerusalem as the capital of the Jewish state was met with a firm no despite B. Netanyahu bringing up ancient history.

"Jerusalem has been the capital of the Jewish state for three thousand years since the time of King David, this is well reflected by the history presented in the bible..." the Israeli PM said.

It is a major event for the Lithuanian Jewish community, its chairwoman says, that at Lithuania's initiative a summit meeting between the Israeli prime minister and European heads of diplomacy was held, that in it the Lithuanian position regarding Israel was heard.

"We are very glad that the Lithuanian minister of foreign affairs invited Mr. Netanyahu, that the Lithuanian representative acted as the mediator between the EU and Israel. We care a great deal about Lithuanian-Israeli relations, it is natural because Lithuania is our homeland, while Israel – our historical homeland. I must say that we have not had such good relations with Israel since the beginning of independence," the chairwoman of the Lithuanian Jewish community Faina Kukliansky said.

According to the chairwoman coming to an understanding of the Jewish Holocaust in Lithuania during the Second World War is a Lithuanian domestic problem which should not influence relations with Israel.

"What happened in history cannot be changed, but I believe that what happened during the Holocaust in Lithuania should not influence relations between Lithuania and Israel. On the other hand I am sorry that discussions on Lithuanian participation bring about such reactions. I believe that the discussions need to be started and concluded at the state level. The education system which has been unable to do anything in 27 years to explain to the young generation about the Holocaust, a part of the youth knows too little about the Holocaust, thus the appearance of certain books and publications brings about a sort of reaction which would not occur if people knew more. As the chairwoman of the Jewish community I cannot state that the Lithuanian government is doing any steps which would intentionally incite this problem," F. Kukliansky said.

The connection to land is very important to humans according to the Bible and the Israeli prime minister's grandmother is from Šeduva, Lithuania. When L. Linkevičius visited Israel, he gifted a copy of a monument to the Šeduva Jews by sculptor Romas Kvintas to the prime minister. His father emigrated to Palestine from Poland just before the founding of the Jewish state. His surname was Milikovski, but the family chose the Hebrew surname – Netanyahu.

F. Kukliansky: such good relations with Israel have not been seen since the beginning of independence