Kęstutis Girnius. LRT – a state within a state? 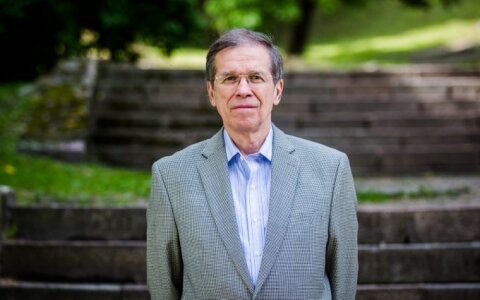 Around a month ago 66 members of Seimas called upon the Lithuanian Radio and Television (LRT) council to answer a number of questions on employee wages and bonuses, relations with production companies, how public purchases are performed, where the public can find their results. So far they have not received a serious response.

Council chairman Žygintas Pečiulis explained that the council cannot provide information on the specific wages of LRT staff or on contracts with production companies because apparently this would breach personal data protection law and confidentiality agreements.

Last week eighty MPs, Seimas Speaker Viktoras Pranckietis and Prime Minister Saulius Skvernelis among them, presented further questions to the LRT council. The extra questions were signed by members of almost all Seimas groups. But from Pečiulis' latest comments, the impression arises that the requested answers will not appear this time either. Once again there was talk of confidentiality – in the past the council emphasised "commercial secrets". Something is often hidden in the name of confidentiality, but certainly not good deeds. It is worth remembering that the director of the Lithuanian National Opera and Ballet Theatre Gintautas Kėvišas would not reveal what sum was paid to performers for his son's company's concerts and how much to his son's company itself because it was apparently confidential information. Lietuvos Geležinkeliai also was unwilling to provide more detailed information on who exactly and with what sums the company supported, stating that the information was confidential.

The Seimas is not some civic organisation which seeks to encourage transparency. It is obliged to perform parliamentary control and has the right and duty to know how state, hence also tax payer, money is spent. The LRT budget is large, just a little under 40 million euro, more than a hundred million litas. A key question arises – can institutions financed by the government disregard a request by Seimas to present information on the company's finances? Especially since we are talking about the LRT which does not hold any classified secrets, the revelation of which would harm Lithuanian national interests. The VSD, other secret services, the Ministry of National Defence may have such secrets, but even they are bound by law to inform the Seimas of their activities. It is unfortunate that the LRT, which seeks to inform its audiences of the secrets and abuses of politicians and businessmen, is trying to cover its finances in shadows and silence.

If the LRT would succeed in not answering the Seimas' questions under the premises of data protection or confidentiality, it would be a massive blow to transparency. A state funded institution would declare itself above government oversight. In such a case other institutions would be tempted to follow the example of the LRT, to make such contracts which would allow them to cover unpleasant, perhaps even compromising material. Public procurements are and must be public, that's why they are called such. If the producer wishes for the contracts to remain secret, they should not sign a contract with the public broadcaster.

While President Dalia Grybauskaitė's representative as mentioned that the LRT, just as other budgetary institutions are bound by the requirement for transparency, we have not heard anything from the president herself. The president often emphasises the need to combat corruption, to ensure the transparent operation of state owned companies, to form conditions for citizens to better understand what the government and its institutions are doing. The president also cannot remain a passive observer because she appoints four of the twelve LRT council members. She delegated Pečiulis. The president must monitor how her appointees perform in their duties, whether their conduct is fair, whether they are seeking to implement values of import to her. Once upon a time Grybauskaitė described Lietuvos Geležinkeliai as "a state within a state", but she is now silent when during her presidency another state within a state is forming. Skvernelis is also content with the role of observer despite entering government with pro-transparency slogans.

The matter is even more important for the Seimas. The LRT's reaction is a challenge to the institutional dignity and self-respect of the Seimas. As mentioned, it is obliged to perform parliamentary control, it has the right to demand and receive answers to its questions. It is surprising that in their request, the members of Seimas "kindly asked" the LRT council to "request" the agreement of the independent producers to provide the Seimas this information. Thus two "requests" for information where they have the right to demand it.

There have been few cases where the Seimas humiliated itself so, but they have occurred. In 2009 the then VSD head Arvydas Pocius accused the chairman of a committee investigating his department's activities Algimantas Matulevičius in the Seimas hall of previous, perhaps continuing cooperation with the KGB. The subtext contained a clear threat. Intelligence is gathering material about MPs and is prepared to manipulate it in order to discredit its critics. Pocius acted as if a colonel in a banana republic, used to making the MPs dance. And our MPs let him do so.

The LRT is not threatening anyone, but intends to disregard the legitimate demands of members of Seimas. A sort of propaganda clash is ongoing between the LRT and the "Farmers", particularly their chairman R. Karbauskis. The LRT insists on Karbauskis answering his various questions about his finances and links to Russia. But the questions aren't new. In 2014 the Conservatives' "Soft Russia containment strategy" identified Karbauskis' activities in initiating and supporting referenda against the sale of land to foreigners and against the Visaginas NPP project, the close links of the Agrokoncernas group with Russia as Russian soft power tools. Karbauskis even sued Kubilius for the infringement of his individual dignity and the reputation of a legal entity.

It would be important to receive answers to these questions. But they should not divert the Seimas' attention from the essence, namely whether it will defend its right to perform parliamentary oversight or if it will disregard it and capitulate. The upholding of the Seimas' powers must matter to all of Seimas, all Seimas groups. The Conservatives, Social Democrats and Liberals are acting as if the LRT's challenge is cast against someone else and not the Lithuanian Seimas, as if it is not their, but others' duty to guarantee parliamentary oversight. Silence, no doubt has short term advantages, but will harm the state in the long term, something they must all understand.

Everything would end smoothly if the LRT granted the Seimas the information requested. The LRT is harming itself by opposing transparency, which is expected of other institutions, so insistently, particularly if it has nothing to hide. Perhaps it will change its mind yet.

Kęstutis Girnius. LRT – a state within a state?