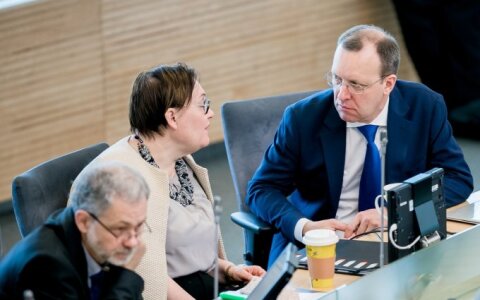 Candidates who openly speak about society's pains – massive poverty, emigration, prices rises due to adopting the euro and who will not arrogantly deny existing problems can expect a successful showing at the presidential elections. Such rhetoric should particularly attract the so-called protest electorate which, according to analysts could make up a third or even half of all voters. And among the candidates being mentioned in public currently, Naglis Puteikis and Aušra Maldeikienė may be the most attractive to them, LRT.lt writes.

As the surveys commissioned by the Delfi news portal from the public opinion and market research company Spinter Tyrimai on November 16-24, 2017 show, if the presidential elections were held this coming Sunday, the main candidates to compete for the post of president would be Prime Minister Saulius Skvernelis and economist Gitanas Nausėda, who are separated by only 0.2%. S. Skvernelis would have support from 12.2% of respondents, while G. Nausėda – from 12%. Kaunas Mayor Visvaldas Matijošaitis would be in third with 9.5% support.

However these are only preliminary surveys. None of these candidates has announced their participation in the race for president. Furthermore political scientists and analysts note that a vast number of people have yet to decide who they will vote for. Who would the protest electorate choose, considering that these candidates would not suit them? According to commenters LRT.lt has spoken to, the percentage of such voters could be a third or even half.

Political analyst Tomas Dapkus stated that the protest electorate will vote for the candidates who clearly name what pains society.

"We must also consider that there is vast poverty that is only starting to be talked about, massive segregation. People see vast problems linked to emigration and they no longer want elite candidates who talk arrogantly or try to deny existing problems – the adoption of the euro which caused price rises, the decline of people's livelihoods. These things exist. There is little desire to talk of it in public, the situation is described as less than it is, however people experience this things every day.

Thus the candidates who openly speak about society's pains can expect the voters' support. The talks of the elite or traditional party candidates, the labelling of the "second Lithuania", segregating people into groups is hurtful and that part of Lithuania may state this through the presidential elections," political analyst Tomas Dapkus told LRT.lt.

Vilnius University Institute of International Relations and Political Science (VU TSPMI) professor, political scientist Tomas Janeliūnas says that the number of such voters could be around a third. "A significant number do not have any clear political preferences and may decide last minute. Those voters can choose from both representatives of traditional parties, as they can from among the populists or politicians oriented toward the protest electorate," T. Janeliūnas explained.

According to TSPMI professor Ainė Ramonaitė, there are more hopeful voters than protest voters, ones who are uninclined to trust the parties with their vote and seek a smart choice which would grant hope that things can be better in the country.

"We somehow imagine that there are angry voters who respectively seek angry politicians. However the angriest and most disappointed voters simply don't vote, they have almost left the political game. Well as for hopeful voters, there are many of them. There is perhaps not just 30%, but even half of those who are seeking. We must consider that the candidates backed by parties do not have to be party members. They could suit hopeful voters very well," A. Ramonaitė noted.

It is expected that the protest vote may congregate toward four names in specific – MPs Aušra Maldeikienė and Naglis Puteikis, European Commissioner Vytenis Andriukaitis and MEP Valentinas Mazuronis.

According to political scientists LRT.lt has spoken to, most of the protest vote could likely go to MPs Aušra Maldeikienė and Naglis Puteikis. The latter has already declared his participation in the presidential elections, while A. Maldeikienė has said that if Ingrida Šimonytė does not enter the presidential race, then it is possible that she will aim for the post.

"I believe that between these candidates it is possible A. Maldeikienė who has the massive energy which is necessary for this type of populists who are aiming for the most disappointed and angry people. N. Puteikis and A. Maldeikienė would have almost the same idea or message to voters however A. Maldeikienė is capable to do it more accurately and more appealing in an emotional sense.

Observe her remarks about the gap between the poor and the wealthy, about the unfair behaviour of certain politicians in their efforts to keep their privileges or taxes. She manages to capture the unfairness aspect extremely well, to illustrate it and present it emotionally. I believe that if she chooses to run for president, she could receive the support of much of the disappointed, irate electorate. This would be bad news for N. Puteikis because he would not be able to turn in the other direction," TSPMI political scientist T. Janeliūnas said.

LRT.lt reminds that in the previous presidential elections A. Maldeikienė supported N. Puteikis. Those elections were relatively successful for the latter – he gathered 10% of the vote from 120 thousand voters.

TSPMI professor A. Ramonaitė also says that of the potential candidates, N. Puteikis and A. Maldeikienė's positions are the best, while V. Andriukaitis and V. Mazuronis are linked with parties that have already been in power.

"List of Lithuania was on a wave and A. Maldeikienė and N. Puteikis were moving in parallel. If they united their forces during the coming presidential elections, they would perhaps have more potential, but if they go separately, the potential will be split up. N. Puteikis has long had the mage of a fighter for justice, is well known in Klaipėda, has his own supporters. Of course political support will also be very important.

History shows that party support is necessary. Even if the person is popular, this may not be enough to reach good results. I believe that of the two candidates, N. Puteikis has more work put into the matter, his electorate and position are clearer. A. Maldeikienė has her circle of supporters, but if it would turn into a circle of voters is a question," A. Ramonaitė spoke.

Political analyst T. Dapkus believes that of the two candidates it is N. Puteikis whose chances are greater – the latest surveys show that his Lithuanian Centre Party has even surpassed the Liberal Movement, which is likely to continue losing popularity due to not renewing itself in the last congress.

"N. Puteikis has a certain structure behind himself, a political party. Meanwhile A. Maldeikienė is a politician who has many acute statements to say that other politicians may perhaps not dare to. She is an interesting politician, her statements are closely followed by the public, various groups, not just the protest electorate. However she has publically stated that she will support I. Šimonytė, she is as if in her support team.

If A. Maldeikienė does run in the presidential race, she would take a certain number of votes from N. Puteikis, however she does not have the backing of a political party. A. Maldeikienė would struggle to gather signatures for the candidacy. Meanwhile her support would be a major plus for I. Šimonytė, would expand the electorate," T. Dapkus explained.

Meanwhile the chances to perform well in the presidential elections for the other two candidates – V. Mazuronis and A. Andriukaitis – are not as big, the experts observe. V. Mazuronis has already declared he will run for president in 2019, while A. Andriukaitis is so far only spoke of as a potential Social Democrat Party candidate, though no decision has been made regarding it yet.

According to T. Dapkus, "V. Andriukaitis is a "stale" candidate, he participates in almost every presidential election and always performs fairly poorly."

V. Mazuronis does not have a party. He is not a bad politician, however it is clear he's on his own. His chances in the presidential elections are fairly limited. Perhaps he is seeking re-election to the European Parliament? Perhaps that candidacy (to the post of president) would grant him exposure," the political analyst mused.

TSPMI professor A. Ramonaitė noted that V. Mazuronis is nevertheless a second tier player. "Hopes of him potentially being a leader were not fulfilled. The people saw him as a decent minister, but did not observe any further potential. After a certain fiasco with the Labour Party I do not see any major prospects. Meanwhile V. Andriukaitis is an interesting phenomenon. Very surprising with his stamina, constant attempts and not giving up, desire to be president. But once again – how can you attempt to ford the same river again? It is hard to see any prospects unless favourable conditions line up for him and the Social Democrats do not have another candidate," A. Ramonaitė told LRT.lt.

T. Janeliūnas added that V. Andriukaitis would likely first wait for party support. "I had the chance to speak to Social Democrat Party leader Gintautas Paluckas recently. They are not yet certain (regarding their candidate in the presidential race). V. Andriukaitis can, of course, run as an independent. But I believe that he will first wait for party support. He is after all more inclined to represent the traditional social democrat side, though of course he has the potential to draw in some of the protest vote because his rhetoric and stance is not typical to traditional parties," the political scientist explained to LRT.lt.

The presidential elections are to be held in May 2019.