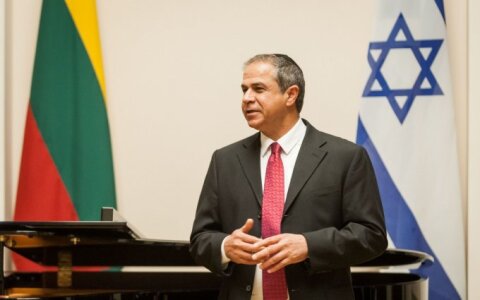 On behalf of Prime Minister Saulius Skvernelis, his Foreign Policy Advisor Deividas Matulionis has expressed appreciation to Ambassador of Israel Amir Maimon for his gesture of solidarity and respect to Lithuanian freedom fight against the Soviet occupation, Prime Minister’s press office reported in a press release.

"You so clearly demonstrated it when visiting the daughter of our most respected freedom fighter Adolfas Ramanauskas-Vanagas. It is evident for me that you, personally, and Israeli people understand very well the significance of this period of our difficult history", says Foreign Policy Advisor Deividas Matulionis in his letter.

He also notes the Government's support to Israel's efforts to strengthen the democratic State of Israel and bring peace in the Middle East region and that Lithuania well understands what it means fighting for own independent state of Jewish people.

"Let us further cherish close partnership between our States and our peoples. You, Ambassador, already contributed a lot to this mutual goal. Thank you", says Foreign Policy Adviser expressing Prime Minister's gratitude.