Kęstutis Girnius. Hybrid wars should not be fought in the dark 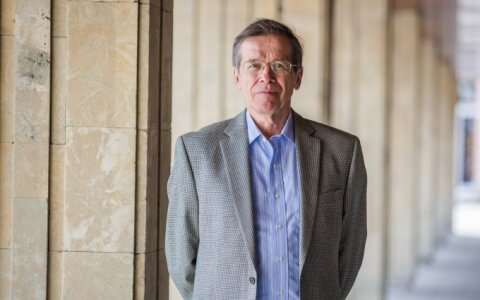 Sometimes it is not difficult to predict future developments. With the State Security Department [VSD] naming the Russian Zapad 2017 exercise the main challenge to Lithuanian national security in February, I understood that they are blowing hot air and if Zapad is the main challenge, then we can feel safe.

This conviction only strengthened when talks began that during the exercise more than a hundred thousand troops may be massed on the Lithuanian border and that part of the Russian troops may remain in Belarus, that there can be provocations, even attempts to enter the so-called Suvalkai corridor.

I was certain nothing of the sort would happen. In a comment on the eve of the exercise I predicted that after the exercises pass, no official who escalated hysteria would admit they were exaggerating. I wrote that "It will be claimed that the feisty stance of Lithuania and in part certain other NATO countries has repelled Russia, thus talks of the Kremlin's intentions were not only not mistaken, but even protected us from danger."

I was not mistaken. At the end of October, VSD director D. Jauniškis stated that in response to the West's actions, Russia changed its plan and "if German, US troops had not been here, would we have a guarantee that it would not have been otherwise?

Perhaps there would have been more aggressive actions on the border, perhaps attempts of territorial entry?" [...] Let's imagine for a moment that Jauniškis is correct and the allied actions deterred Russia, made it change the nature of the exercise or even abandon important parts. What would Russia say about this?

We do not know the real reasoning in Moscow, but such a withdrawal would seemingly show that Moscow is easily intimidated. After noticing the West's preparations, it could only continue with the intended exercise as planned if it renounced provocations. If talks and the deployment of several battalions made the Kremlin adjust the exercise, then it is difficult to believe that it would risk a military confrontation with NATO, which it would likely lose.

This would mean that we are exaggerating the threat posed by Russia. That's one possibility. There is another, more convincing one that Zapad 2017 was not a cover for a potential attack or in Jauniškis' words "An attempt on territorial entry" (What would they have done on entering?), but just a regular large scale exercise held every four years.

It was not only in Lithuania that the Zapad 2017 exercise was linked to the worst case scenario.

The German Minister of Defence Ursula von der Leyen said that a hundred thousand troops would participate in the exercise. NATO Secretary General Jens Stoltenberg has repeatedly expressed concerns over a lack of transparency, though on the eve of the exercise he stated he sees no threat.

The most influential US newspaper the New York Times dubbed the exercise "an exercise in intimidation that recalls the most ominous days of the Cold War."

There have been more reserved evaluations. Finnish Minister of Defence Jussi Niinistö noted that the West swallowed the Kremlin's bait by giving the exercise significance, thus helping Moscow spread its propaganda and pursue its goals.

Slovenian president Borut Pahor stated he was surprised over Vilnius alarm over the Russian threat, however assured he understands the Baltic States' concerns.

Jauniškis's stance is worrying because it is a behaviour as if nothing should be learnt by the failure to predict the proceedings of Zapad. Perhaps it is simply stubbornness, unwillingness to admit mistakes? Perhaps it is the inability to change preconceptions when they do not match facts?

Or perhaps the VSD and other Lithuanian intelligence agencies overall do not have independent capacities and instruments to understand and evaluate events in Russia, thus have to rely on allied intelligence data?

None of these scenarios are good. [...] One must opt for the most suitable defence strategy. The VSD will not have the final say in making this decision, but can significantly weigh in, if it aids in understanding what is going on in the Kremlin, what Moscow's plans are.

The unjustified fearmongering prior and after Zapad 2017 do not inspire confidence, more likely create the image of an organisation stuck in dated thinking. If this is true, it is necessary to quickly reform the VSD and all of Lithuanian intelligence. Hybrid wars should not be fought in the dark.

Kęstutis Girnius. Hybrid wars should not be fought in the dark