Vytautas Radžvilas. As always the Lithuanian position is to not have a position 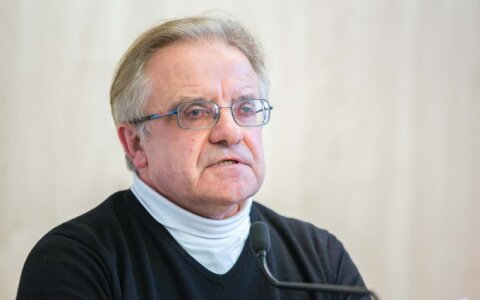 When commenting on the Lithuanian decision to vote in favour of the UN General Assembly resolution over the status of Jerusalem, the state's Foreign Ministry justified this decision on it being the "long-term European Union position" regarding the Middle Eastern Conflict. Looking at this position from the perspective of decades it is clear that its foundation is to passively swim downstream, that is to say do nothing and change nothing.

President Donald Trump's decision to recognise Jerusalem as the capital of the Israeli state is the first resolute and courageous step in attempting to move the conflict out of deadlock. No doubt it is also risky. However prior to rushing to accuse and blame, we should compare this step with the "long term joint" EU position. This means that it needs to be considered and evaluated based on two perspectives – the ideological premises which inform EU policy in the region and the understanding of the Israeli state in a theoretical and historical context.

The ineffective EU policy did not appear from nowhere. Wanting to understand its roots, real content and potential long term repercussions, firstly we must clearly understand and openly admit that it is based on the ideologised and one-sided multiculturalist world view typical to the formers of the EU "long term and united policy". Thus the mentioned position is only a consistent and inevitable manifestation and reflection of it in the sphere of international policy. The direct political expression of such thinking toward resolving the Middle Eastern Conflict is the EU backed project of the two state solution with partitioned capital of Jerusalem. At first glance it is solid – fairly convincing and appealing. But only as long as undersea rocks remain unseen that greatly hamper the fulfilment of the project.

The proposed two state coexistence could at least currently only ensure their vitality and functionality by maintaining joint infrastructure. It was created by the state of Israel. Practically it would mean that the Palestinians are simply making use of the labour and efforts of Israelis who reclaimed sun-scorched desert lands and made them into a thriving land. Furthermore under such conditions the border between two formally separate states would factually vanish. It would inevitably have to be conditional and permeable to the point of fiction.

As such when we look at namely this EU backed two state project and see the underwater rocks, it becomes clear how exactly it is inspired by the ideology of multiculturalism and to what extent it is based on openly undisclosed premises of it. This ideology provokes and maintains an empty and encouraging to wait for who knows what hope that the Middle Eastern Conflict will resolve itself when an open multicultural society appears magically in the region. This hypothetical society is absolutely crucial for the implementation of the project.

However ideological engagement and the blindness to the truth that arises from it prevents to admit a crucial fact: an open, democratic and free Israeli state is nevertheless a nation state. On becoming a multicultural society, the founders of the state, the Jews would be faced with a real threat of being drowned out in "variety" and not necessarily in purely demographic terms. To be clearer – even if they would not be overwhelmed by Arab Muslim populations and would not become a minority in a state they themselves founded and nurtured, to break up the state it would be enough for a "multicultural" lifestyle to entrench and spread in it under such conditions. It would gradually push out and finally would break down the currently prevailing Western lifestyle. This, in term, would mean that inevitably not only the largest island of such a lifestyle in the Middle East would be irrevocably destroyed, but even the democratic state of Israel – not just a civilizational, but also a geopolitical Western outpost in this gunpowder barrel of a world region. This would "naturally" resolve or rather "inherently" resolve the conflict if it would continue to develop based on the most general reconstruction of the publically undisclosed logic, which the strategists of the EU policy for the Middle East operate on factually.

The US president's decision is primarily important in that from ideological dreams it returns to the here and now of geopolitical reality. It symbolically and intentionally states that the existence of the Israeli state is an irrevocable geopolitical and historical fact, which should be taken seriously. It also reminds that Israel appeared as the Jewish nation state and does not exist to disappear. There are no ethnically pure states. They never existed and never will because it is simply impossible and really such states aren't even necessary. But this does not mean that a state does not have the right to defend its national identity and the lifestyle chosen by its founders. Speaking more concretely and applying this insight for Israel, it would appear natural and obvious that in Jerusalem itself there have always been and will be residents of various origins – Arabas and other nations. But we should also understand that the capital of the Israeli state should nevertheless differ from Baghdad, Cairo or Tripoli.

Even our Vilnius was always a multinational city. But let us remember: during the occupation years there was basis to worry and no desire for it to no longer differ from Kaluga, Tambov or Voronezh, which is what was being attempted. Unfortunately with Lithuania voting for the UN resolution this was forgotten and the question at hand was viewed not through the prism of our own political and historical experience, but through reality altering ideological glasses. As such things went as always. This time it was not dared and managed to think with one's own head, thus no opinion or position was had. The sad tradition of floating downstream was continued. The vote was cast "as necessary" despite countries appearing who acted otherwise. The "long term joint European Union position" did not prevent them to decide who their most reliable friends and allies are and what the actual Western, European and particularly their own long-term national interests are.

It is worth emphasising that the aforementioned supposedly unilateral, but in fact intentional and potentially capable of breaking decades of deadlock decision by D. Trump is principally not denying or cancelling the idea of two separate states. It only brings wanderers cosily settled on their pink clouds and used to carelessly flying on them in the skies back down to the ground where they are warned that it is not worth waiting for easy and pleasant negotiations over two states. But only these – firm and hard – negotiations can bring real and long-lasting peace. There simply is no other way – such is the political and grim, but not ideologised message the US president sends to a world which continues to deceive itself and primarily to the conflicting parties.

This truth is better than the two decades of running from reality which is becoming the reason of the constant and potentially eternal ideological and political lie. It is namely this lie and the inaction rationalised and justified by it that could finally end with the greatest disaster – sooner or later bring the Middle East to real geopolitical or military disaster.

One can only hope that the political mistake made once again will become a serious reason to consider what it means and where such short sighted and ineffective EU positioning regarding the Middle Eastern Conflict will bring in the long term. And on daring think this way, primarily it is worth stepping over the ideological views which simplify reality and look more soberly and more demandingly at the "long term joint EU position" – interpret and evaluate it based on not imaginary, but existing geopolitical realities. The founding geopolitical reality is clear – it is the strengthening of the Islamic world and the rising pressure on the West, but primarily Europe. But on that another time.

Vytautas Radžvilas. As always the Lithuanian position is to not have a position