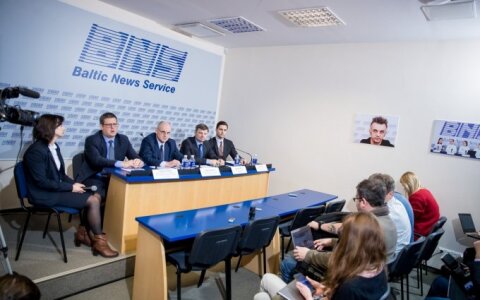 On Friday representatives of Agrokoncernas, which is owned by the Lithuanian Farmer and Greens Union (LVŽS) chairman, MP Ramūnas Karbauskis, presented their position on recently raised questions regarding the activities of this business group.

The press conference featured Agrokoncerno Grupė general manager Valdas Eimontas, Agrokoncernas director Edgaras Šakys, Agrokoncerno Grūdai head Karolis Šimas and Agrokoncerno Technika, as well as Latvian Latagrokoncerns board chairman Egidijus Šileika. R. Karbauskis himself, delcaring that he does not participate in the making of specific decisions for the business group, was absent from the event.

"We understand that we receive attention due to the political activities of R. Karbauskis, but we wish to stress that we do not desire to become involved in politics. R. Karbauskis does not participate in the group's work, does not have any influence and makes no decisions. Up to being elected member of Seimas, he participated in approving the strategic plans of the companies and the financial auditing reports. Currently he has passed on his legal rights to other individuals and makes no business decisions," V. Eimontas said, adding that the politician handed over non-property rights to one of his attorneys.

V. Eimontas also explained that R. Karbauskis' father Česlovas Karbauskis is currently not active in the work of the group because he has been living in Germany for half a year now and only consults his son's business.

The head of the Agrokoncerno Grupė assured that they, businessmen, cannot match Haroldas Mackevičius (humourist who has in recent weeks raised questions on Facebook over the business group's activities and R. Karbauskis' involvement) in eloquence, but promised to answer the most pertinent questions. He also complained about questions that are being escalated as of late.

"The impression arises when analysing what is presented that Agrokoncernas is not allowed to purchase fertiliser from Russia though all Lithuanian companies in the segment do so. That the group must pay an extra anti-dumping duty though it does not have to be done based on the composition of the imported fertiliser, that we cannot buy and sell grain according to Lithuanian regulations, cannot cultivate land because we are trying to "occupy it", cannot make use of EU support though we match standards, cannot exact debt by legal means and such," V. Eimontas said.

"The companies adhered and will continue to adhere to land purchase regulations in purchasing land and do so only with the required permits. Land is purchased only where our companies rented from other owners and which will be further used for agricultural production. We do not purchase any other land," V. Eimontas emphasised.

The head of the Agrokoncerno Grupė said that the group works with around 6,000 clients.

"Farmers are free to choose who to work with, who to interact with. No-one forces them to buy chemistry, seeds or sell grain. The farmers are free to also choose the means of interaction - cash payment, bank payment or to use a service we provide – sale with payment delay. Usually if a farmer makes use of such a way, it is applied up to next year's harvest, September 30th. If we are to talk about the 2018 harvest, we are already beginning the process," the businessman said.

According to him around 80% of clients choose delayed payment.

"It is natural that a company which contributes funds requests some form of repayment protection. Financial institutions use deposits and it is difficult to obtain credit there without mortgaging land or buildings. Furthermore they grant significantly lower credits than the deposit. In order to have a guarantee that the client will return the money we ask for clients who take products through delayed payment to sign promissory notes and I see nothing wrong in it," V. Eimontas stressed.

He did not deny that there are cases where farmers struggle to repay their loan. "We take no action for practically two months after the repayment date. And if a message is received that his funds are arrested, we have to take action in order to safeguard our funds. We speak with every farmer, try to come to terms over what period the debt can be covered. The farmer has the right to choose how to resolve the question – whether that we should call upon the services of a third party bailiff to regain the debt or whether we would work together, help them get out of the payment difficulties," the head of Agrokoncerno Grupė said.

According to him, if the farmer agrees to continue working and wishes to try resolving the issues, the group then applies a payment delay for another year, sometimes for two to four.

"Yes, cases occur when farmers do not talk, do not want to. In such a case legal proceedings begin," he explained.

Nevertheless V. Eimontas assured that the concern's groups have raised three bankruptcies for companies. Two went bankrupt, while the Žvirblioniai company was saved by the group's efforts.

On Thursday the 15min portal announced that Agrokoncernas imports fertiliser from the Russian fertiliser giant PhosAgro which is partially owned by an individual close to the Russian President Vladimir Putin. One of the shareholders of this company is scientist Vladimir Litvinenko who is seen as part of the Kremlin head's entourage.

R. Karbauskis' company group states that apparently of the fertiliser imported by it, this company's production makes up only a relatively small part. As they specify, around 3-4% pf the Agrokoncernas group's fertiliser assortment is comprised of PhosAgro production. Lithuanian farmers apparently usually make use of other fertilisers where there are three main chemical elements needed for cultivating plants (nitrogen, phosphorus and potassium).

He specified that Agrokoncernas has been purchasing phosphorus fertiliser from PhosAgro for more than 20 years. He also accented that other major Lithuanian companies are also clients of this Russian company.

"There was never a thought that we should doubt this company. It is listed on the London stock exchange. Only four countries have phosphorus at this moment. We will consider how we can live otherwise, but we are a business," E. Šakys noted.

"Our company had no contact with CIS countries, we have no purchased or sold grain to them. Our geography is the Baltics and Poland," the businessman explained.

Agrokoncernas presented its position in a press release published at the end of December. The document which was signed by Agrokoncerno Grupė head V. Eimontas was released after several weeks of discussions regarding questions publically raised for R. Karbauskis by journalist Edmundas Jakilaitis and humourist Haroldas Mackevičius.

The statement claims that in the past financial year of Agrokoncernas' activities (July 1, 2016 to June 30, 2017), the company paid 18.5 million euro in various taxes, of these 2.4 million euro was import duties. The scale of transactions was not revealed, motivated by confidentiality.

In its answer to the publically raised doubts over fertiliser imports, Agrokoncernas then specified that all fertilisers imported to EU countries is classified based on the data of the European Common Customs Tariff.

"Relevant state institutions oversee these processes, Agrokoncernas companies pay tax based on the specified classification and have no basis to doubt that such taxes are paid by all fertiliser importers, of which there are several tens of in Lithuania alone," the press release stated.

The data claimed that in recent years fertilisers with three main active materials were the most popular, with phosphorus, potassium and nitrogen contents fluctuating around 30% of the active materials. However Agrokoncernas did not specify the scales of trade in these fertilisers, apparently seeking to protect the business interests of suppliers and the company itself.

The press release also states that the group's company Agrokoncerno Grūdai did not participate in any illegal agreements or competitions, not in 2004-2008, nor any other time.

The head of the company stated that in Lithuania only food grain seed is sown. "Animal fodder wheat which is often mentioned in the media recently (they were brought up by E. Jakilaitis and H. Mackevičius' questions to R. Karbauskis) is not cultivated at all. Based on the Lithuanian standard, wheat and triticale is not separated into food and animal fodder grains. Wheat and triticale is separated into different classes based on respective metrics of the grain (such as proteins, gluten, humidity, impurities, the size of the grain and such)," the press release stated.

Information was also released that in exporting wheat and triticale, every country purchases grain based on its own standards or demand.

In explaining its relations with farmers, the group outlined that the Agrokoncernas group's companies evaluate the farmer's situation and capacity to take a loan, provide agrochemical production with payment delays up to one year, pay advances, grant loans for farm development.

Discussions ongoing for a number of weeks

Delfi reminds that R. Karbauskis, E. Jakilaitis and H. Mackevičius' correspondence on Facebook has been ongoing for a number of weeks. Discussions arose when R. Karbauskis released a statement where it is announced that three companies linked to E. Jakilaitis received more than 2.5 million euro revenue last year while paying only 0.3% tax.

After several minutes, E. Jakilaitis released 24 questions on Facebook for R. Karbauskis about his businesses, but stated that this move was not linked with the politician's earlier statement.

With the discussion gaining momentum, E. Jakilaitis mentioned he received information about a court case being formed against him. Soon Agrokoncernas did warn the journalist that if he does not deny the statements made in the questions, it would take matters to court.

H. Mackevičius entered the debate at a similar time. Dviračio Šou, a satire show he makes with colleagues is broadcast on LRT.

He stated he wishes to present questions to R. Karbauskis differently so it would be understandable "even for Ramūnas' esteemed cow." H. Mackevičius raised questions regarding the composition of the fertilisers, took interest if it was imported from Russia, as well as with the politician's Agrokoncernas' relations with farmers and such.