Siaurusevičius reveals a secret plan against the LRT 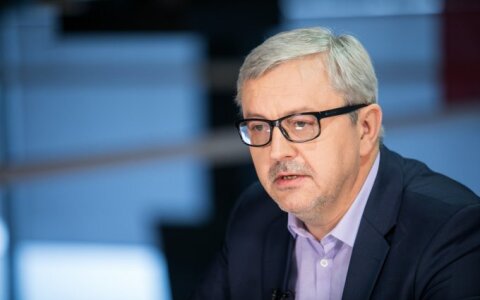 He assured he had heard already a year ago that "something will be done" and here the Seimas suddenly chose to rush an investigation of the LRT, perform a parliamentary investigation over business, financial and managerial activities.

"I am not against it, particularly if there is something specific that causes doubts. The LRT council proposed that the National Audit Office could perform an audit, there are other institutions. A large part of what we do, our finances can be found in the Ministry of Finance as well," A. Siaurusevičius explained.

Delfi reminds that in late November the LRT presented answers to a group of MPs who raised doubts over the transparency of the national broadcaster. However a portion of the requested information linked to production companies, LRT audit results did not reach the politicians, in accordance with confidentiality requirements.

On December 13, 80 MPs including Prime Minister Saulius Skvernelis and some opposition members signed under further questions to the LRT about wages, contracts with production companies and property renting. Politicians were presented further answers from LRT on January 2.

According to the head of the LRT, everyone understands that politicians could hold interests, thus he also understands the prime minister's words that "after reviewing that information I, as a former law enforcement officer, would certainly call upon law enforcement to perform an investigation" as a proposal for other responsible institutions, not the Seimas, to initiate an investigation because MPs are not auditors.

"When the Seimas investigates the news media, they themselves will struggle to deny they hold interests. Any statement by a politician can be interpreted as "the journalist presented it wrong", "asked wrong". Especially when I have heard informal "hints" that some things are too short, shown wrong. There are many newcomers in Seimas now, they likely imagined that they will be spoken to, interest will be taken in them," the head of the LRT said, hinting at Ramūnas Karbauskis who turned to politics from business.

According to A. Siaurusevičius, R. Karbauskis "imagines that he is seemingly uninvolved, but tries to drive the car from the back seat, while Agnė Širinskienė and a few others sit behind the steering wheel."

According to the head of the LRT, regardless of the company's activities being financed by the budget, it can have secrets. He points to one of these being journalist's wages – it would apparently not be beneficial because firstly they have to compete with other news media groups for the best specialist and secondly, an employee's agreement is needed to reveal their wages.

He also shared suspicions how the MPs will deal with the requirement to maintain confidentiality.

According to the politician, a contract was made with a producer for a single episode of a 130 minute long show, with a payment of 100 thousand euro for it. Based on another contract, a 150 minute long show was to cost 110 thousand euro, furthermore the LRT committed to contribute its own resources to the creation of the show, thus the cost of the programme rose to 140 thousand euro.

"Meanwhile A.Širinskienė herself leaves me questions. Various documents were presented to the Seimas, some with confidentiality clauses and now she is spilling specific sums. You see when you read estimates, you need skills to comprehend what exactly is written there. This is why we are offering for specialists to review this. We have the answers and explanations regarding our activities," A. Siaurusevičius responded.

The head of the LRT agreed that he suspects that A. Širinskienė could have released confidential information to the public.

According to A. Siaurusevičius for some reason there is an unwillingness for the National Audit Office, auditors to come to the LRT.

"Perhaps I was naïve in thinking that there will be enough common sense and this won't happen," he said regarding rumours that spread immediately after the elections that the new Seimas has the LRT in its crosshairs.

The LRT CEO shared suspicions that the question regarding the public broadcaster was delayed after the elections for a number of reasons.

"I would say that the question was postponed due to Mr. Karbauskis' personal problems. We will talk and explain because we care more about public confidence rather than that of the Seimas," he explained.

"The plan was as follows – to present questions in full knowledge that the LRT will be unable to answer some in public, then accuse for not answering, form a commission. The commission will make a ruling and in doing so the LRT legislation will be changed, as will the regulations for council appointment. We had yet to put together the response, but I already knew that they would not be enough, I was told so by a number of MPs," A. Siaurusevičius assured.

A. Siaurusevičius: I have a great many friends

According to him, the LRT collaborates with at least 50 individuals who present projects, producers' creations. That said, he admits he does not choose to go on holiday with all of them.

"Laurynas Šeškus is possible one of the best Lithuanian television specialists, thus it is an advantage, not a drawback that he works with us," the LRT CEO said.

Nevertheless agreements with producers, he assured, should remain confidential because later it could be difficult to compete with commercial broadcasters.

"I have a great many friends, I communicate, you can only create content that way," A. Siaurusevičius said.

According to him, R. Karbauskis is also an old acquaintance. When asked if the two had gone on holiday together, Siaurusevičius just smiled.

"He goes on holiday in mysterious ways, even you sometimes can't find where he is at," A. Siaurusevičius explained.

When asked about the Naisių Vasara show which the LRT broadcast, whether back then the LRT management did not find it concerning that during the pre-election period it was broadcast during prime time, with one party's symbols and one group's logo and whether this could be concealed advertising, A. Siaurusevičius explained that the regulations have now changed and back then the offering price was very appealing.

"You are confusing with TV3. We did not broadcast it during the pre-election period, the time wasn't the best – you can check. They participated in a competition and received an evaluation. We need series, we are always seeking who could make a quality series. This one wasn't bad and later when those things started emerging, we parted ways.

Back then oversight institutions had no complaints, likely because R. Karbauskis' ambitions were not clear, that he would go to Seimas this way – perhaps due to it. The main reason why we broadcast it is that we thought that it could appeal to our viewers, the audience. Another thing is the price. The offering price was very appealing," A. Siaurusevičius said.

"We have not spoken to a lawyer firm, but likely some payment will be needed. It could be necessary to hire extra people specifically for relations with Seimas. When you want to present information, someone has to compile it – we do not have staff who deal in this. Now a part of our people could not do their jobs as they had to compile the answers," he noted.

The head of the LRT did not dismiss plans to return to journalism at the end of his term and assured he wanted to let the public know that the real goal of the current uproar is the post of president, not head of the LRT.

"I link this to the presidential elections," A. Siaurusevičius said.

Siaurusevičius reveals a secret plan against the LRT