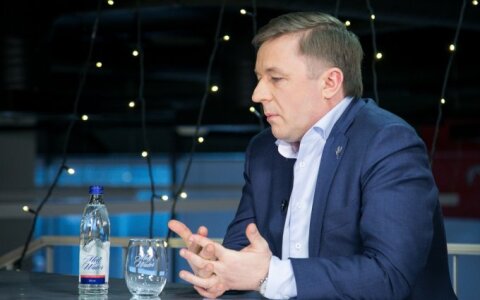 The Lithuanian Prosecutor General's Office on Tuesday decided to open an investigation into media reports about the business owned by Ramūnas Karbauskis, the leader of the ruling Lithuanian Farmers and Greens Union, and his family members.

"In light of the information published in the media about cases of joint ownership by a few legal entities of more 500 hectares of agricultural land, which exceeds the limit allowed by the law, a decision was taken at the Prosecutor General's office to initiate an investigation to defend the public interest," the office said in a press release.

Sources at the Prosecutor General's Office confirmed to BNS that the probe had been started in response to media reports about Karbauskis.

According to the press release, a decision on taking the case to court will be taken based on the investigation and the received data.

Related articles
War on Facebook between Karbauskis and Jakilaitis
Kęstutis Girnius. LRT financing review is no assault on the freedom of press

"This is not criminal prosecution or a pre-trial investigation, by no means. These are civil instruments, we may initiate cancellation of the contracts later. This does not mean a priori that this will go to court. We are just starting an inquiry to collect documents and data needed for a decision. And only when we have them all, we will decide on whether there are legal grounds to take the matter to court," Elena Martinonienė, spokeswoman for the Prosecutor General's Office, told BNS.

The public interest advocacy process involves to witnesses or suspects, as the authorities only collect documents.

On Monday, 15min.lt news portal reported that Agrokoncernas, the concern owned by Karbauskis, used land owned by his sons, sister, brother and father. Karbauskis says the deals were legitimate and did not violate any laws.

Lithuanian laws ban a person, a company and related companies from owning more than 500 hectares of farmland.