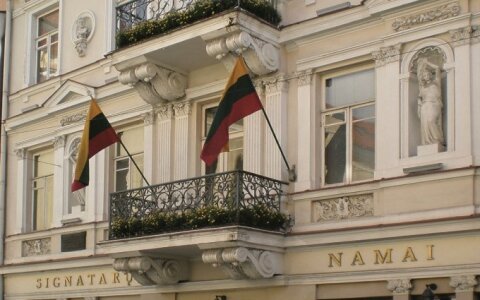 A solemn ceremony was held in the House of Signatories in Old Town Vilnius on Sunday to inaugurate the exhibition of the February 16 1918 Independence Act brought to Lithuania from Germany.

"It was here, in this building, that our freedom was born a hundred years ago. Twenty men had the courage to declare our unconditional independence. This is what inspired us to do the same on March 11 – declare unconditional independence," President Dalia Grybauskaitė said at the opening. "It always takes brave people and a brave nation that can defend, fight, win back, preserve and, if needed, restore freedom and independence."

The president thanked Liudas Mažylis, professor of the Vytautas Magnus University who located the historic document in the German diplomatic archives in Berlin last March, and Germany for handing over the document.

"Today we are proud to be able to grateful to Lithuanians: Lithuanian professor Mažylis who discovered the document. We thank our partner and friend Germany that preserved the document and gave it to us on our centennial anniversary so that we could show the document to our people," said Grybauskaitė.

The president and Mažylis together opened the door to the room that will feature the document, while the act was unveiled together with Vytautas Landsbergis, Lithuania's first post-independence leader and speaker of Lithuania's Supreme Council – Reconstituent Seimas.

The Independence Act is exhibited in the same room where it was signed by members of the Lithuanian Council in 1918.

Lithuania and Germany last year signed an agreement on handover of the act to Lithuania for five years, at the most, with storage of the document updated on an annual basis. Under the deal, the document could be exhibited in Kaunas in 2022, when the Lithuanian second city becomes the European Capital of Culture.