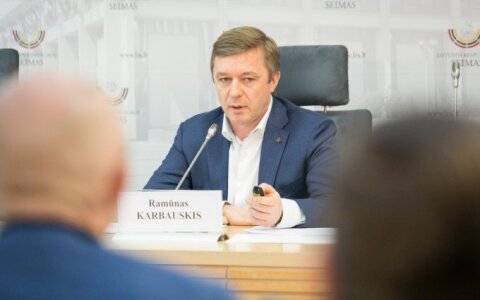 Conservative members of a commission set up by the Lithuanian parliament to scrutinize the activities of the public broadcaster Lithuanian Radio and Television (LRT) say that Ramūnas Karbauskis, chairman of the ruling Lithuanian Farmers and Greens Union (LFGU), is hindering the probe.

Andrius Navickas, Žygimantas Pavilionis and Agne Bilotaitė of the conservative Homeland Union–Lithuanian Christian Democrats issued on Tuesday a statement urging Karbauskis "to stop politicizing the LRT scrutiny and to allow the commission to do its work.

The LFGU leader said on Tuesday that LRT was providing answers to lawmakers' inquiries "in a completely chaotic way", which he said indicated "a possible mess in the handling of LRT documents, too".

"By making LRT responses, its invoices, contracts and other documents public, Ramūnas Karbauskis is very actively trying to turn it into a political show, a personal fight against LRT," Navickas said.

"Moreover, Karbauskis is imperatively trying to tell the commission for LRT scrutiny how it should work and whom to turn to. (He) is telling law-enforcement bodies what to do and taking other steps obviously aimed at putting pressure," the member of the Communism said.

"I underline that Karbauskis is neither the chairman nor a member of the commission and, therefore, his active involvement can only be regarded as pressure on the commission," the conservative lawmaker said.

"All this hinders the commission's work, undermines its impartiality and may have an impact on the impartial assessment of facts by the chairman of the commission or some colleagues in the commission," he added.

The Seimas in early January set up a special commission for parliamentary scrutiny of LRT, saying that it will look at whether the public broadcaster rationally spends budget money.