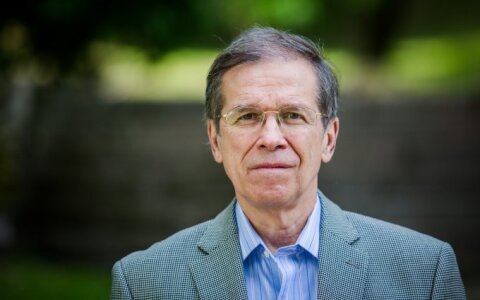 His wrath was provoked by the decision to support a UN resolution on December 21 which identified US President Donald Trump's decision to recognise Jerusalem as the capital of Israel as illegal.

Related articles
K. Girnius. Lithuanian-Israeli friendship, but where are the values?
Vygaudas Ušackas: Foreign policy in 2018: from threat of war to Lithuania’s historic skills

Butkevičius is not only one to be discontent with the Lithuanian position. More than 60 politicians, intellectuals and other personalities, I. Degutienė, P. Auštrevičius, A. Guoga and J. Olekas included, signed a Lithuanian-USA association statement criticising the Lithuanian position. The USA is apparently the primary security guarantee of Lithuania, it is important to develop bilateral relations, thus voting for the resolution, which criticises a US decision, reveals the "lack of insight among foreign policy decision makers in terms of understanding the overall field of Lithuanian interests and risks."

Since the USA publically and oficialy requested to not vote against its decision, Lithuania should have abstained as did Latvia, Poland and some other Eastern European states such as the Czech Republic, Croatia, Romania and Hungary.

It is worth mentioning that all Western European and Northern states voted same as Lithuania – in support of the resolution. Only eight countries voted against, thus supporting the USA.

Butkevičius, same as Prime Minister S. Skvernelis has a basis to criticise the president for deciding the guidelines of Lithuanian foreign policy on her own with little, if any, consultation with the cabinet and other politicians.

It is said that two heads are better than one and often that is the case. However, in this specific case it is good that the president has her own opinion and does not act according to Butkevičius and the Lithuanian-US association. According to the association, "It doesn't even matter what the vote was on. What matters is that the USA publically and officially requested to not vote against its decision, but Lithuania did."

This statement reeks of vassal mentality – my lord's desires are my command, which I will always satisfy. We should not be mistaken – the USA and Lithuania are not equal partners. However, neither are we pushovers who hold every request to be an order. We must not yield state dignity in seeking to pander to the USA, regardless of what is demanded.

Those who assure that the USA is Lithuania's most important ally are not mistaken, it is a country which guarantees Lithuania's security and which ensured during the Cold War that other Western states would not recognise the occupation of Lithuania.

There have been attempts to create distance to Washington. During her first term, Grybauskaitė stated a number of times that he predecessor, Valdas Adamkus was incapable of differentiating between Lithuanian and US interests. She disregarded President Obama's invitation to meet in Prague, citing concerns that he may declare a policy course which will be unfavourable to Lithuania and her presence would be seen as consent. Her concerns were without basis, there were no "betrayals". The president quickly withdrew her sceptical perceptions of Washington and her policy differed little from that of Adamkus.

Under normal circumstances the US' wishes should be followed, its foreign policy should be supported. However, not when it is clear that the US policy is unacceptable and in breach of international norms and Western values. While there is no clear cut proof that there was a CIA prison for jihadist interrogations in Antaviliai, most specialists have no doubt in its existence. In 2014, the US Senate Select Committee on Intelligence Committee released a report about the Central Intelligence Agency's enhanced interrogation programme. Though the report contains censored areas where host countries for CIA jails are mentioned, it is clear that there was a "purple" centre in Lithuania where Saudi citizen Mustafa al-Hawsawi was held and that the centre was closed in 2006.

While President Valdas Adamkus perhaps did not know about the prison, certain high Lithuanian officials had to consent to its establishment. They probably also thought that it matters not what the US requests, only that it is requesting and it has to be complied with, despite not serving Lithuanian interests. It is thought that such prisons were also present in Poland and Romania, countries that abstained in the UN vote regarding Jerusalem.

Another unnecessary example of pandering was a statement by the Vilnius Ten. The Ten declared unambiguous support for the American attack on Iraq, at the same time distancing themselves from many of the "old" European countries' more critical stances.

The declaration was not the peak of diplomatic wisdom because it supported an invasion, which was in breach of international norms. Furthermore, it quickly turned out that the supposedly independent policy was enacted on prompt because the main author of the statement was American lobbyist Bruce Jackson. The statement became an excuse for the then US Secretary of Defence D. Rumsfeld to divide Europe into the "old" and the "new", to which Eastern European states belonged. US favour was won at the price of values.

Butkevičius and other signatories of the statement are discontent that Lithuania did not obey the US request to not support criticism of its policy toward Jerusalem.

It would be one thing if Lithuania was opposing an important US policy principle, however President Trump's decisions to move the US embassy to Jerusalem were based on less so important geopolitical considerations or changes, but an intent to enact electoral campaign promises and pander to his electorate. Trump's decision, which is critically received by the US foreign policy elite, not only opposes a number of UN resolutions, but also 50 years of US policy, which was supported by both political parties and nine presidents.

There is no serious reason to satisfy the fickle US president's desires. Lithuania did not suffer due to Grybauskaitė's independence or "slights", it is hardly likely that it will due to this vote. It is unlikely that by pandering to Washington in this regard, Lithuania would win US favour, would enter its "good guys" list. Instead of trying to guess how Trump will react, we must adhere to morals and common sense. This was what was done regarding Jerusalem.