Lithuania and Europe: the European Union should be called European Commonwealth 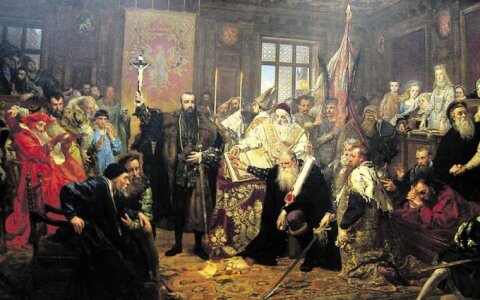 With the evolution of changing identity and history's repeating challenges in mind, let's take a sober look at Lithuania's position in Europe.

Lithuania is an independent state the citizens of which constitute a political nation. At the same time Lithuania belongs to a broader political community – the European Union. I still do not know why in this case we use the term "Union" (Sajunga) for union. Is the legacy of the Soviet "Union" closer to us than the history of the Commonwealth (Unija) between Lithuania and Poland? We can see that the structure of today's Union is similar to that of the "Commonwealth" of the Grand Duchy of Lithuania and the Polish-Lithuanian Commonwealth (but not with that of the Soviet Union) when political identity evolved voluntarily on several levels.

What's important to note is the decision made in the almost forgotten Union of Lublin Document. Poland and Lithuania did not unite to form a single state, but rather a single political "body", a Republic which was perceived as a civil (of course at that time just ceremonial) community with order, rights and values. The Republic did not become a unitary state but created an internal oneness that was inhabited by free citizens.

Is that the direction in which the European Union should be heading – a republic of many nations/countries? Is that the most favourable route for Lithuania in terms of culture, well-being and security? And what blocks the EU from developing this way? First of all, fear of obstacles; some are scared of emigrants, others of climate change. Some fear war while others fear growing administrative expenses and decreasing pensions.

Fear in itself is neither good nor bad but it can't be ignored. Fear in actual fact is partly what helps us unite and move forward. The first ideas about a united Europe came about in the face of the Turkish peril.

It's natural that people are confused given all the new things that are happening. In the 18th century people were scared of the all new and modernised city architecture, i.e. of all of those buildings that we think of being rather beautiful because there are always "uglier" ones. We'll never get rid of fear, anxiety and dissatisfaction with new things. Politicians however must look for positive responses to these fears. One way is to "humanitarianise" their policies in which there is an excessively entrenched "technological" approach to society and, as a consequence, decisions.

Policy must be a field for the creation of what is significant, of connections, values, justice etc., which must be disseminated, explained and discussed publically.

If we continue to imagine the European "Commonwealth" as one of Brussels bureaucrats and European Parliamentarians travelling between Brussels and Strasburg then off course it will stay like that - a structure far away that has little impact on peoples' lives.

It's therefore necessary to bring European policy closer by reminding us of its achievements (which have become sort of self-explanatory for new generations of Europeans) – long-term peace, freedom of movement for people and goods and a guarantee of justice.

In this age of digital communication there's been a break in communications – one of those deliberated bureaucratic decisions, which don't only effectively transform everyday life but which inevitably will impact on the future of the EU. All of these achievements are important but they simply aren't enough. They are too universal to establish an identity. At the beginning of the 2000s, just before the advent of the euro, German historian Jorn Rusen asked a rhetorical question at the University of Vilnius – "what will the euro of the spirit be?" If we want to see Europe as more than a geographical and economic unit, then a European idea, a European narrative is needed.

Doubtless this narrative has to begin with a story that, like other "great narratives", should reveal its roots to the community. The narrative must also have its limitations in order to show what's "not Europe" is or what it is that makes Europe different.

Europe as an exclusive, even selected communal concept, is coded in its flag of 12 stars, reminiscent of the Judeo-Christian tradition of these numbers (the 12 tribes of Israel, the 12 apostles of Christ etc.). Lithuania must subscribe to the creation of a narrative like this when narrating its own Europeaness.

There is are good prerequisites here. Polls constantly show that Lithuanians are not convincingly pro-European. European subsidies hardly support this enthusiasm but rather I think an instinctive longing for westernisation and maybe the fact that such an identity is traditionally stronger in border and conflict regions (this may call to mind the idea of the Christian Empire / Shield of the antemurale / clipheus christianitatis which was widespread in Poland and Lithuania in the 15th century).

We may even ignite Poland with this love for Europe. That would be our own "debt repayment" to the Poles for putting us on the European road of the Middle Ages. If that doesn't work, then one needs to prepare for the scenario of a "multi-speed Europe" and for a Lithuania that is safer, more useful and more just, one that is open and free with rational policies in contrast to countries that are nationalistically closed and xenophobic and once again seeking a "third way".

"Provincial nationalism" is not only repellent, it's plainly dangerous. Historical experience shows in no uncertain terms that belonging to a broader community doesn't threaten national identity because identity matching is natural. It's not "European identity" that is threatening national identity, it's banal nationalism imposing another world and the self-perception of new generations.

History and the historian must first of all teach society that by recognising the past they will understand the present and not fear the future; to meet change calmly and establish your life. Together however political direction ("why Europe") and the place of our country ("where in Europe") is explained. In this way we contribute to the creation of an identity and we hand over the experience that each important step was a choice and that historical opportunities can be both exploited and missed.

The Third of May Constitution as a model for Europe?

Europe needs new incentive. From our own historical experience we could propose to Europe our own "Third of May Constitution" as a model that liberates and integrates citizens without destroying the sovereign polity. These sovereign polities, with Lithuania as one of them, must reveal their own individual strengths and special competencies. It's not about image (which is important here) but about reacting to political realities. And once again from a historical perspective Lithuania could productively remember and spread the idea of openness.

In this case the "Gediminas' Letters" are an apt symbolic motive. Everybody knows that the Grand Duke Gediminas was calling for "merchants and artisans" however it's a little known fact that he undertook to guarantee them a fair and free life. But openness of course is not just about immigration. Openness can in a positive sense change Lithuania's image as that of a problematic "border territory".

Historically, a border is not a place of threats only, it is also an economic and cultural opportunity. Lithuania should be a place of leadership in ideas where everything that is to do with Europe can be conveyed as such for the Belarusians, Ukrainians Russians ... and Poles.

The idea of Europe and European integration is undergoing a new phase of development and is perhaps even on a threshold. The direction of its development will be determined by a political and cultural elite. It would be good that Lithuania contributes its own experience to the debate.

It's here that we can exploit a "belated advantage" – Lithuanians as "belated Europeans" have a better view of what the European project is lacking in; people living under a big threat can propose more decisive solutions right there where things are going wrong.

Could the idea of Third of May Constitution (to which the historic "Mutual Commitment Act of the Polish-Lithuanian Commonwealth" was added on 20 October 1791) indeed be a vision for Europe as a single political entity for multiplicity (cultural, linguistic, experience) both inside and outside the countries of a multi-state Republic?

Lithuania and Europe: the European Union should be called European Commonwealth