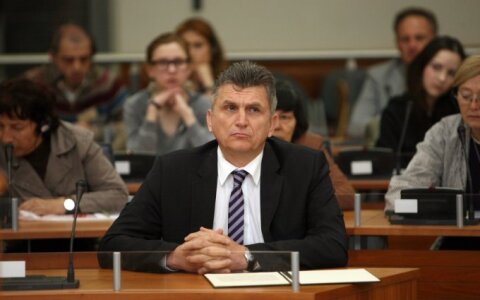 The head of the LRT was insulted last week that Kęstutis Girnius compared the LRT with Lietuvos Geležinkeliai because apparently it was not considered that the national broadcaster is a media organisation that has a creative and cultural mission. No one disputes this but the talk is not about content, it is about transparency and accountability.

While he still lingered in the post, former Lietuvos Geležinkeliai head Stasys Dailydka also tried to respond to accusations of corruption and abuse with a poker face, stating, "We transport passengers very well." Dailydka and his excuses are now history; meanwhile the LRT is now taking the transparency, more accurately lack of, flag from Lietuvos Geležinkeliai.

It is becoming apparent now that the cleansing of Lietuvos Geležinkeliai was as if an easy stroll for the ruling majority, compared to the LRT because the national broadcaster has massive information warfare resources and its management is demonstrating firm political will to employ those resources in repelling any attempts to at least peek at its accounting.

The LRT leadership's resolve to counterattack with all weapons at MPs intent on counting its funds is faced with the limited abilities of the Seimas commission to investigate LRT activities to articulate its goals, the implementation of which, Ramūnas Karbauskis is doing his best to hamper with his missteps in the public sphere. The result is an information war where the opponents mirror one another's communication – evil enemies attack both and both have things to hide. The LRT heads defend their untouchability by raising alarms over supposed dangers to the freedom of speech, while Karbauskis – over supposed bullying.

The painful reaction of Karbauskis and the "Farmers" at the clown shaped mockery in a show business event yielded Oskaras Koršunovas the opportunity to advertise his own production of Tartuffe because "Karbauskis' psychological image was described by Moliere's genius in already the XVII age."

Why only Karbauskis? This "psychological image" fits the LRT leadership perfectly as well. One of the most important recipes for Tartuffe's communication success is to pretend being to be an innocent victim being prosecuted, like in this monologue by Tartuffe:

The mere thought of such ingratitude

Another trick Tartuffe favours is the conspiracy theory, which he develops as follows:

And show you plainly it's no use to turn

To these low tricks, to pick a quarrel with me,

And that you can't insult me at your pleasure,

For I have wherewith to confound your lies,

Those to repent who talk to me of leaving.

Neither Karbauskis, nor the LRT director are lacking in abilities to present themselves as victims or targets of an evil conspiracy. The coincidences sometimes reach to the details – is Heaven not angered by the attempts to chase the current owner out of his home in S. Konarskis street, something both he and his squires have mentioned.

It is noteworthy that from the LRT side we have directors and producers of various rank fighting, while journalists, such as those of the radio and television information services, are presenting news from the information battlefields in a balanced manner, especially compared with the LRT leadership. There are no obvious problems in state maintained, if you can so say, LRT departments, such as the news service or the Lithuanian radio. However the largest question marks and the most energetic opposition begins in segments practically privatised by producers where there is the most money and the most doubt over the justification for spending, the entrenchment of regular clients and the balance of producers who ensure impartiality.

On the other hand the attitude of the LRT leadership to journalists and freedom of speech has surfaced through plans to reform the LRT.lt portal by factually eliminating its journalistic content and the chief editor responsible for it, one who constantly caused difficulties by standing for a sober leadership style, which would appear to be raising some issues for the LRT management.

So far, the greatest signal of danger to the freedom of speech has appeared not from the Seimas, but from the internal censor, when during the annual LRT staff awards, the host of the awards (and young journalist) Arnas Mazėtis publically pandered to his boss, expressing hopes that the director will go ahead and candidate for his third term.

The methodical counterattack by LRT is truly impressive. Just over a week after the parliamentary commission's formation, the head of LRT participated in the internet conferences of several of the country's largest news portals; the broadcasts of LRT were also used, where the warm news was revealed that the director general unsuccessfully dabbled in poetry in his youth. More has been done in the public sphere over a week than was seen over the past few years.

Edmundas Jakilaitis' announcement that he would run for LRT director with an unprecedented LRT transparency programme became a significant part of the campaign. However, the miraculous programme turned out to be a propaganda bubble because due to the LRT council's formal requirements, Jakilaitis' candidacy lasted just thirteen days and the programme "LRT transparency tomorrow" today became a vicious struggle with the Seimas commission. A team of LRT heads alongside the same Jakilaitis participated in Karbauskis' press conference – in other words stared the enemy in the eyes.

It would appear that with tensions rising, things might end with a dramatic claim that the LRT is being attacked by a vicious and cunning enemy, thus the current head has no other way than to sacrifice himself and run for his third term because he must lead the defences of almost the only fortress of democracy. Especially when the people (Arnas Mazėtis) ask for it.

It will be interesting to observe here whether President Dalia Grybauskaitė will manage to remain principled here regarding the rotation of state institution leaders after a maximum of two terms, especially when in her hands she holds the only real lever of political influence – the president appoints four of twelve LRT council members. So far, there have been no complaints to hear from the LRT management regarding pressure from Daukantas Square. Instead, there is plenty moaning about the danger to the freedom of press from the side there is none – from Ramūnas Karbauskis, who has no real means to influence the LRT council.

Of course, the ruling majority's formal traits leave plenty of room to question the Seimas commission's suitability to perform its duties, but that is the responsibility of the opposition, news media and the public that the commission would not overstep the clear constitutional limitations – not to interfere with matters of LRT content in performing the constitutional duty to oversee budgetary spending.

Judge Šileikis stressed that any Constitutional Court ruling must combine two fundamental constitutional values: the freedom of speech and parliamentarism. In his opinion, the 2006 ruling clearly outlines the possibility for the parliament to oversee the national broadcaster's finances, just that this must match a respect to the freedom of speech. Grybauskaitė repeated essentially the same formula when she wished for the LRT to not fear to open itself up and for the commission – to not overstep constitutional limitations.

Former LTV star and long time Transparency International Lithuania branch head Rytis Juozapavičius, also in an LRT broadcast, expressed the opinion that the LRT now has a window of opportunity to open up: "If the LRT had actively performed its homework, announced everything transparently, then the political elite would have no prtext to begin the dialogue from such positions of power of "let's go ahead and review everything." I believe that this situation is a good incentive for everyone to improve."

However, the LRT is in no rush to open the window of opportunity. Instead of removing confidentiality clauses in contracts with producers, it is instead releasing declarations of transparency, which make LRT internal life no more transparent. When a police officer stops a BMW with tinted windows, it is usually not enough for the driver to claim the windows are not tinted. Meanwhile the LRT driver is adhering to an undisputable declaration of transparency and is even developing a narrative about the policeman's person – "my windows are transparent, but you there are incompetent, seeking political goals, limiting my freedom of self-expression and overall have no constitutional right to review me."

So far, the LRT management is ignoring good advice to open up and is continuing Tartuffe's communication plan. If the policy of total antagonism continues, it could help Ramūnas Karbauskis recover his ratings because the assault "eye for an eye, tooth for a tooth" does not look very righteous and devalues the news media's mission to uncover the truth, rather than settle grievances.

One of the LRT management's bastions of defence is the intimidation of us risking the Polish scenario. No one wants this outcome, but will it not happen that the LRT claiming the untouchable position of "we cannot be investigated out of principle" will, better than any Seimas commission, convince the broad audience that the Polish scenario isn't so bad.