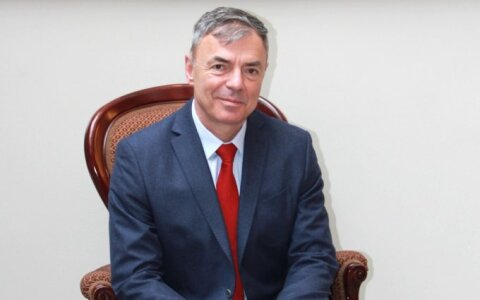 The Vilnius-based European Humanities University ( EHU ), whose students are mostly from Belarus, will get a new rector on March 1 – the post will be taken by Bulgaria's former education, youth and science minister Sergey Ignatov.

EHU said on Tuesday his appointment had been unanimously supported by the general assembly of the university's members.

Ignatov served as Bulgaria's minister for education, youth and science in 2009 -2013. H e has worked in the Sofia University and the New Bulgaria University, heading the Bulgarian Institute of Egyptology before the post in EHU.

EHU in late 2017 received a negative assessment from the Lithuanian Center for Quality Assessment in Higher Education, which said that this provided grounds for "revoking the authorization to deliver studies and carry out activities related to studies".

EHU's performance was evaluated last year because it received a negative assessment after an earlier review in 2014 and was only issued only a three-year accreditation.

EHU has said that it disagrees with the negative institutional evaluation results. In the university's opinion, reforms carried out between 2015 and 2017 helped it make "a substantial progress in fostering strategic management, studies and research".

EHU is a private university that was established in Minsk in 1992, but was later closed down by Belarus' authorities. Reopened in Vilnius in 2004, it enrolls nearly 800 students, including 95 percent from Belarus.

EHU's donors include the European Union and the Lithuanian government, with necessities and support to the EHU also provided by a US-based non-profit organization Friends of EHU and a special organization founded in Germany.