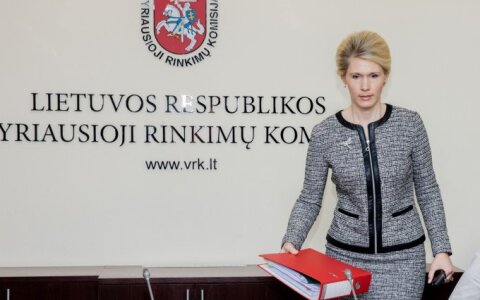 Laura Matjošaitytė, chairwoman of the Lithuanian Central Electoral Commission, or VRK, and other members of the election body must dispel doubts about the transparency of their decisions, President Dalia Grybauskaitė said on Thursday.

"VRK is a body that guarantees the quality and transparency of our democratic elections. Therefore, all the members of VRK, as well as its head, must dispel all the doubts so that we have no doubts about objectivity and transparency and that we could trust the authority during elections," she told reporters.

A VRK working group last June drafted a opinion regarding events sponsored by Ramūnas Karbauskis, chairman of the ruling Lithuanian Farmers and Greens Union (LFGU), but the document at that time was not submitted to the commission for consideration.

Matjošaitytė on Wednesday did not tell reporters why the document had not been submitted, but said that it had been added to an ongoing probe by VRK.

The 15min.lt news website has reported that the working group did not list any violations of the election law in its opinion on support provided by Agrokoncernas, a company owned by Karbauskis, to events and a TV series featuring Naisiai, the village where the LFGU leader was born, but it proposed that the commission turn the State tax Inspectorate over possible tax breaches.

The working group estimated that Agrokoncernas could have spent over a million euros on events related to Karbauskis between 2013 and 2016.

The opposition Homeland Union–Lithuanian Christian Democrats plans to ask the Prosecutor General's Office to launch a probe into signs of influence peddling and abuse in this situation.

The conservatives suspect that Matjošaitytė was given the job of VRK head after the working group's opinion on Agrokoncernas' financial support was concealed. The chairwoman has denied these allegations