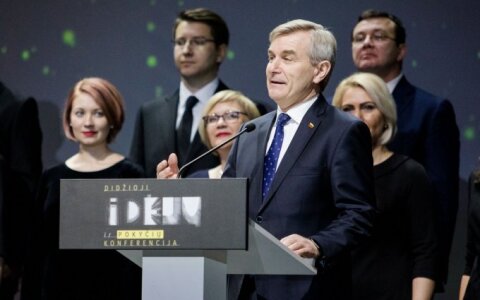 Lithuania's Parliamentary Speaker Viktoras Pranckietis of the ruling Farmers and Greens Union (LFGU) sees no reasons for the head of the Central Electoral Commission, Laura Matjošaitytė, to resign, adding she "is working properly."

"I asked her to give me clear answers to the questions the public has, and we will make determined decisions afterwards," Pranckietis told journalists after meeting with Matjošaitytė on Friday.

The parliament's opposition groups turned to the parliamentary speaker with a request to call upon the head of the election watchdog to resign over the concealed conclusion in connection LFGU.

"She answered many questions I asked her. There were questions about consistency and what happened when but from what she is saying, she is working properly. Things are clear to me and she will give her own answers (...). She must answer all questions before we decide whether she can continue in the post," said Pranckietis.

After meeting with the parliamentary speaker, Matjošaitytė said the conclusion was not submitted for discussion immediately after preparation due to "heavy workload."

The 15min.lt news portal has reported that the working group did not list any violations of the election law in its opinion on support provided by Agrokoncernas, a company owned by LFGU leader Ramūnas Karbauskis, to events and a TV series featuring Naisiai, the village where the LFGU leader was born, but it proposed that the commission turn the State tax Inspectorate over possible tax breaches.

The opposition Homeland Union–Lithuanian Christian Democrats have turned to the Prosecutor General's Office to launch a probe into signs of influence peddling and abuse in this situation. The party believes Matjošaitytė was given the post of chairwoman of the Central Electoral Commission in exchange for concealing the conclusion on Agrokoncernas' generous sponsorship to events linked with Karbauskis. Matjošaitytė has denied the presumptions.