President: "All shadows" in election watchdog's work must be cleared 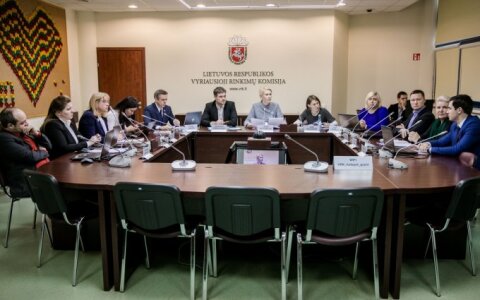 Lithuania's President Dalia Grybauskaitė says that "all shadows" concerning the performance of the Central Electoral Commission (VRK) have to be eliminated.

"We must ensure safety of our electoral system. (As to the) scandals and discussions that we hear in connection to the Central Electoral Commission – I am restating my position that VRK must remain impartial transparent, all shadows must be cleared, all uncertainties must be answered. I restate that direct responsibility for the quality and control of the VRK performance remains in the hands of the Seimas and I truly hope that the Seimas will conduct the function to the full," the president said after meeting with the parliament's board at the President's Office on Tuesday.

Following her statements and those of the parliamentary speaker, Grybauskaitė did not answer a BNS question about confidence in the VRK chief, the commission and the ability of the current line-up of the commission to ensure transparent elections.

The opposition has raised questions about the responsibility of VRK chairperson Laura Matjošaitytė for the failure to discuss conclusions about the ruling Farmers and Greens Union that were drafted by a task force in June of 2017.

The conclusion does not establish violations of election laws, however, suggests turning to the State Tax Inspectorate over the millions of euros in support from Agrokoncernas, a company owned by LFGU leader Ramūnas Karbauskis, to events linked with Karbauskis.

The law-enforcement has rejected the request from the opposition conservatives to open a pre-trial investigation about the operations.

After meeting with the president earlier on Tuesday, Parliamentary Speaker Viktoras Pranckietis said "merely one and a half" of the ten VRK members he had met on Monday said it would be difficult for them to work with the current chairperson.

"Therefore, I see no need and possibility to replace the VRK chairperson yet," he added.

President: "All shadows" in election watchdog's work must be cleared