Širinskienė refuses to join a discussion due to Jakilaitis‘ participation 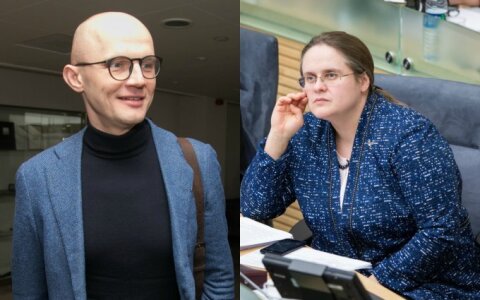 "Farmer" Agnė Širinskienė refused to participate in events moderated by journalist Edmundas Jakilaitis while an investigation of the Lithuanian national broadcaster LRT is ongoing in the Seimas.

She provided this explanation after refusing to participate in a discussion about the issues of the Central Electoral Commission (VRK) organised by NGOs. The discussion was being organised by the initiatives Žinau, Ką Renku [I know, who I'm electing], Baltosios Pirštinės [White Gloves], the Lithuanian Council of Youth Organisations and the Open Lithuania Fund.

The discussion's moderator was to be E. Jakilaitis. This appeared to be the key issue for A. Širinskienė, who I part of the ad hoc commission in charge of investigating LRT activities.

"The situation is truly ambiguous because Mr. Jakilaitis is not only a journalist, he is also a businessman, his documents are being reviewed in the ad hoc commission. I believe that it is very unethical to participate in such ambiguous situations. It is unfortunate, but as a member of the commission, I would rather avoid such situations during the investigation," A. Širinskienė said.

According to the MP, when the LRT investigation concludes, the situation will change.

"I do not want to cause any sort of precedents because, you know well that in the public sphere it could be said that the moderated discussion is some sort of bribe or influence. I truly want for the commission to work without any sort of blemishes and I will avoid ambiguous situations," A. Širinskienė said.

The MP regretted that she announced her withdrawal at the last moment, however she explained that she was simply not informed of the event format and participants earlier.

"Had I known earlier, I would certainly have informed them ahead of time," A. Širinskienė said.

A statement released by the organiser suggests that A. Širinskienė also found the participation of journalist Rita Miliūtė as problematic.

In the conversation with Delfi, the MP assured she had no issues with R. Miliūtė's participation.

"When the investigation object is television, various problems can arise. I certainly do not want to predict the future. In this specific case, I see no problem with participating in a discussion with Mrs. Miliūtė," A. Širinskienė said.

Journalist E. Jakilaitis explained that he was invited to moderate the discussion by civic-minded youths and he did not invite A. Širinskienė himself.

"I value civic-minded youth having an interest in this and gladly accepted," E. Jakilaitis said.

According to the journalist, A. Širinskienė's arguments are unfair because she did go to an independent producer's show on LRT earlier in the day.

"She says she won't participate in a discussion moderated by E. Jakilaitis because E. Jakilaitis is not only a journalist, but according to her also a businessman, whose contract with the LRT is under investigation by the ad hoc commission.

This did not prevent Mrs. Širinskienė from participating in Virginijus Savukynas', another businessman as she claims, show on LRT. He, same as me, is an independent television producer, whose shows re broadcast on LRT and whose contracts are of course also being investigated in the ad hoc commission," E. Jakilaitis said.

The journalist believes that such behaviour by A. Širinskienė is "stretching political positions toward some sort of non-existent ethics standards."

"It is clear that she does not uphold any standards and is only trying to cover her unwillingness to participate in an inconvenient discussion with some sort of self-created ethics standards she does not really stand by," E. Jakilaitis said.

Unfazed by the epithet

The journalist also caught on to the epithet "businessman" used in A. Širinskienė's rhetoric.

"Most likely some sort of public relations advisers recommended to begin describing me as a businessman because the public supposedly thinks poorly of businessmen and would thus think poorly of E. Jakilaitis," he stated.

E. Jakilaitis noted that legislative acts do not provide for the possibility of independent content creators to create television projects without forming a legal entity.

"You have to have some sort of organisation, which can create television projects. Lithuanian legislation does not provide for the opportunity for independent content creators to work without a legal status. As such, any person, who has created any sort of legal entity is a businessman according to Širinskienė," E. Jakilaitis said.

He believes that the effort to mix these two matters is made in order to distort the essence because the journalist was invited to moderate the discussion.

"As for the fact that some journalists – me and many other individuals, V. Savukynas himself, whose show she pleasantly visited today, are the founders of legal entities, that is only in order to create independent content.

It is a sort of play of epithets, which leads nowhere because the word "businessman" does not insult me. The Lithuanian Constitution states that the Lithuanian economy is based on personal initiative and it is a great victory of ours," E. Jakilaitis said.

Denies offering an excursion instead of the discussion

Seimas speaker Viktoras Pranckietis' team denies the organisers' statements that apparently instead of the discussion, they were offered to visit for an excursion in the Seimas.

"The head of our secretariat spoke with the organisers. It was mentioned, that this discussion is very significant and specifically that it is youths, who are organising it, is very significant to Lithuanian political life, the Seimas and politicians. However due to the speaker's busy schedule prior to the Seimas session, a tense time with a full agenda, the organisers of the event were offered to come for a personal visit to the speaker," the Seimas speaker's press representative Karolina Frolovienė said.

She assured that the Seimas speaker is prepared to answer any questions from the NGOs, which were organising the discussion.

"I did not hear the conversation myself, but I was assured by the head of the secretariat that it was certainly not how it is described on social media," K. Frolovienė said.

The discussion's organisers were disappointed with a number of participants refusing to join the discussion.

"The promises of openness to the public and transparency declared by politicians remain unfulfilled, while the doubts over transparency in the VRK activities remain undispelled. The discussion "Election challenge: how to bring back public confidence" was cancelled with less than an hour left to the event because LVŽS representative A. Širinskienė and VRK chairwoman L. Matjošaitytė refusing to participate last minute," the NGO press release states.

According to it, while the discussion participants were disclosed to the LVŽS Seimas group while arranging the participation of their representative and information on the event was publically available from Monday, the organisers received a message immediately prior to the event that the LVŽS representative A. Širinskienė refused to participate: "Good day, I have bad news – Agnė was not warned that Edmundas will be moderating, that Miliūtė will participate. As a member of the LRT investigative commission this would be a conflict of interests, thus she will be unable to participate." The LVŽS group did not propose an alternative representative for the discussion, according to the organisers.

"Immediately following the LVŽS refusal, VRK chairwoman Laura Matjošaitytė announced that she cannot participate in the discussion, as her letter claims, "due to being occupied." The discussion topics and potential questions were being arranged with the chairwoman during the evening prior. The chairwoman also did not propose an alternative representative for the VRK," the press release states.

Civic organisation Baltosios Pirštinės head Marija Šaraitė states, "We must admit that the events of the past few weeks linked with the VRK raised and continue to raise public mistrust in elections and the dialogue that did not occur today is a clear sign that publicity and transparency remain simply a declaration."

"It is unjustifiable that the desire of youths to actively take interest in ongoing events is not responded to. The so far low youth turnout in elections can only be remedied when politicians view us as fully fledged members of society," one of the discussion's organisers, Žinau, ką renku coordinator Aušrinė Diržinskaitė states.

Seimas Speaker V. Pranckietis' team, according to the organisers, informed earlier that it sees no reason to participate in this discussion because the questions already receive sufficient attention in the public sphere and the active youth were offered an excursion in the Seimas.

"Current behaviour demonstrated by politicians and officials is a major step back, when youths were told that their voices do not matter. Youth are always turned to when there is need for contributions to civic initiatives, changes in the country, but lacking a reciprocal connection, youths will begn doubting the necessity of their civic duty in this country," the Lithuanian Council of Youth Organisation (LiJOT), which organises the campaign Man Ne Dzin [It's not irrelevant to me], president Antanas Mikalauskas said.

The three NGOs organising the discussion believe that the LVS and VRK representatives displayed disrespect for the youth and for society by lowering their civic awareness to simply excursions in Seimas.

Širinskienė refuses to join a discussion due to Jakilaitis‘ participation