Seimas to vote on stripping MP Bastys of his mandate 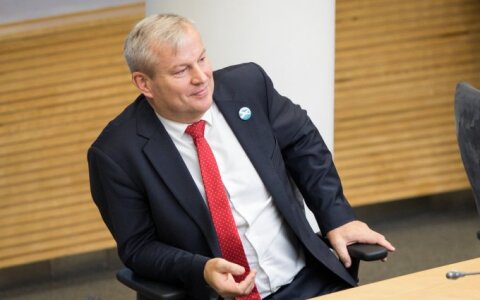 The Lithuanian parliament is to vote Tuesday on whether to strip MP Mindaugas Bastys of his mandate.

At least 85 votes in the 141-member parliament are needed to pass an impeachment resolution against Bastys.

Viktoras Pranckietis, the speaker of the Seimas, has said that he believes that the lawmaker may resign before the vote.

Bastys denies having breached the Constitution, saying that he did not deliberately conceal anything.

The lawmaker describes his inadequate answer regarding his links with foreign intelligence officers in a questionnaire he had to fill out to be granted access to classified information as a mistake that cannot be treated as a gross violation.

Dainius Žalimas, president of the Lithuanian Constitutional Court, said that the court had formulated, in the case, a doctrine that "one's failure to disclose, in good faith, information about one's links relevant to protecting state secrets is inconsistent with the conscientious performance of the duties of a member of the Seimas".

"The final decision rests with the Seimas, which will look at whether or not this conclusion provides a sufficient basis for the removal of the member of the Seimas from office," he told reporters.

If Bastys resigns or is impeached, a new election will be held in his Zanavykų single-member constituency in southwestern Lithuania.

The lawmaker suspended his membership in the Lithuanian Social Democratic Party after the scandal over his alleged ties to Russia arose.

Seimas to vote on stripping MP Bastys of his mandate