Romas Lazutka. The tax system is functioning, but only for the president and her favourites 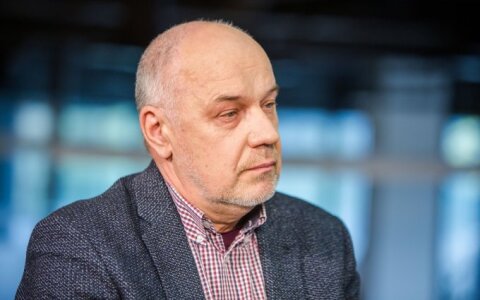 When discussing the work for the spring session with the Seimas management, in respect to the ruling party's promised tax reform, the president stated that, "We shouldn't break what is already functioning."

Those who are at least a little familiar with taxation and feel responsible for Lithuania's development were, I believe, left stunned. What is functioning and what can still be broken in what R. Kuodis described as the tax NONsystem, this animal farm?

The animal farm was established a long time ago and back in 2001-2004 D. Grybauskaitė, as A. Brazauskas' minister of finance, nurtured it herself. It is unsurprising that the former Farmer-Greens finance minister candidate S. Jakeliūnas, who promised tax reform, found the door shut. V. Šapoka, who does not want any reforms was selected. With the support of D. Grybauskaitė, the same role of an empty space in the cabinet was performed by Social Democrat minister R. Šadžius for two terms.

The Lithuanian tax system is particularly favourable for the wealthiest, thus bank economists, who represent this social stratum and normally never miss an opportunity to speak, met the president's shot at the crucial tax reform with a supportive silence. The representative of the Free Market Institute went further, trumpeting about the dangers of the potential changes.

Well then, if there is no one in the country to represent the middle class, which carries the main tax burden and at the same time is impoverished by the modest state budget, let us look at what tax authorities say, ones for whom our president's word is not final.

All of them! All of the international economic organisations which are the most important to Lithuania – the European Union, the Organisation for Economic Cooperation and Development (OECD) and the IMF – are advising Lithuania to reform its tax system. Due to its inefficiency, the citizens are suffering inequality, are left impoverished and are pushed out of economic activity and finally out of Lithuania.

Last year the IMF specified a Lithuanian tax system structural weakness. It manifests in a vast gap from other EU member states based on state tax income. The gap is almost 11% of GDP, which is some 5 billion euro.

If not this gap, Lithuania could double healthcare or education funding. Half of this gap is due to tax administration flaws and the black market, however another 40% is due to certain low tax tariffs or lack thereof.

The IMF states that structural reform should rebalance the tax system from indirect and labour taxes toward wealth and capital taxation (IMF, 2017b, p. 1). The IMF recommended to establish a second tax tier for those earning high incomes (IMF, 2017a, p. 19).

As you see, unlike our president, the IMF experts see that the current taxes are not functioning. What is more, the IMF specifies that the tax reform is also necessary in the name of justice: "The impact of tax redistribution depends on the capacity to increase citizens' income progressivity, capital and property tax size and structure.

However, taxes are also very important in seeking to generate the funds needed to finance expenses, necessary to establish justice" (IMF, 2016, p. 20).

Just a few days ago, the European Commission released a report on Lithuania and specified that, "Lithuania's tax benefit system has one of the lowest corrective powers on income inequality in the EU" (European Commission, 2018, p. 15). The flaws of the Lithuanian tax benefit system were also discussed in the EC 2017 report (EC, 2017, p. 1, 5 and 23).

It is stated that "<...> , the low progressivity of the tax system limits the effect of redistribution and thus limits the potential for reducing inequality and poverty, which is among the highest in the EU" (EC, 2018, p. 15). The tax burden is relatively large for this with low incomes, while for those with high incomes – smaller than the EU average. This reduces incentives for low income earners to work, increases their poverty levels and inequality (EC, 2018, p. 15).

The EC notes that while the VAT gap (difference between the estimated VAT and the amount of VAT actually collected) has decreased, it remains one of the largest in the EU (EC, 2018, p. 16). Expansion in the tax base would increase the state's income without harming economic growth and would reduce inequality and poverty. The current difference between nominal and effective tax tariffs denies the effectiveness of current tax policy (EC, 2017, p. 14).

The OECD, which we are seeking to enter this year, announced its report on the job market and social policy of Lithuania (OECD, 2018). It states that Lithuania's capacity to strengthen the social security network is greatly limited by the poor state of public finance. Tax revenue is among the lowest among OECD members. "It primarily reflects the low citizen income taxes, the current flat Lithuanian income tax system, low capital taxation and lack of significant property tax" (OECD, 2018, p. 190). "By strengthening its tax system progressivity, Lithuania could generate far more revenue and at the same time maintain incentives for working at the lower end of the income redistribution spectrum" (OECD, 2018, p. 190).

It is noted that the OECD pointed out earlier – in 2016 – the possibility to raise property taxes and abolish exemptions for capital increase taxation. It is repeated once again (OECD, 2018, p. 191). Taxes and benefits do little to reduce inequality in Lithuania (OECD, 2018, p. 63). A result of the significant income inequality is that a large portion of Lithuanian residents live in poverty (OECD, 2018, p. 65).

Lithuanian citizen's income distribution trends to income concentrating in the small wealthy group, while the incomes of those in poverty are exceptionally low and the middle class is very "thin".

"Low quality employment, low income and vast inequality contribute to the low welfare satisfaction which leads to emigration" (OECD, 2018, p. 69). How else can you say that the failed tax system leads to poverty, inequality, the destruction of the middle class and finally Lithuanians leaving their homeland en mass?

Lower educated provincial youth, lacking work and adequate social support due to the sparse state budget has emigrated en mass upon the EU opening up.

In recent years, once more due to the failure to gather taxes needed to adequately fund the public sector, those who could aim for the middle class are also emigrating. Their income largely depends on tax financed sectors of healthcare, education, science and state service. Middle aged individuals are increasingly concerned over their future, growing old in a country where there is a chronic struggle to finance pensions.

Businessmen, unwilling to pay the wages, which are increasing due to emigration, are pressuring the government to ease entry conditions for foreign employees.

However in a country with such an already thriving black job market, there is little need for most foreigners in the first place. Well then, the Soviet Union Communist Party Central Committee chairman Michail Suslov's plan of Lithuania will be, but without Lithuanians is, paradoxically, working as we meet the 28th March 11th.

After all the president says "there's no need to ruin what already functions." For this, Lithuanian citizens pay painfully. In poverty, inequality and expulsion from their homeland.

3. IMF (2016), IMF Country Report No. 16/126. Inequality and income distribution in Lithuania in an international comparison: trends, causes and policies.

Romas Lazutka. The tax system is functioning, but only for the president and her favourites