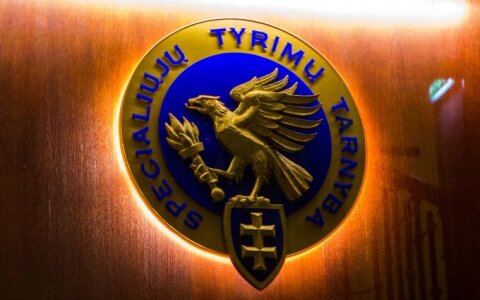 Officers of the Lithuanian State Security Department were satisfied with a verbal answer from impeached MP Mindaugas Bastys about his acquaintance with Piotr Voyeiko, a former KGB agent, therefore, no further probe was conducted, says the MP's lawyer.

After the parliament on Tuesday opened discussions of an impeachment procedure against the MP, lawyer Juozas Gaudutis aimed to prove that Bastys had forgotten knowing Voyeiko, therefore, did not understand the question.

Bastys' failure to specify the acquaintance when filling out the department's questionnaire for a permit to handle fully classified information led to a finding that he grossly violated the Constitution and his oath of office. After the conclusion, he risks losing his MP mandate.

In his answers to fellow parliamentarians on Tuesday, Bastys said he had been confused and failed to specify the relations with the former KGB agent, as the questionnaire asked about knowing incumbent and former members of foreign intelligence services, as the Soviet Union no longer exists as a state.

He noted that the State Security Department must have warned him if it saw that contacts with certain individuals was a threat to the state.

"I was in contact with citizens of the Republic of Lithuania, I had no doubts about the citizens, I had no other information, which was at the disposal of the services," said Bastys.

The lawyer, Gaudutis, said the investigations did not find Bastys' recruitment by foreign intelligence services or any important documents handed by Bastys to Voyeiko.

Bastys faces impeachment over his ties with certain individuals named in intelligence materials, including Yevgeny Kostin, who is seen as a representative of Rosatom, Ernest Matskevich, a journalist of the Russian state channel RTR, Saturnas Dubininkas, who is said to be a former Kaunas mafia leader, and Vadim Pakhomov, a businessman suspected of illegal activity. The actions date back before November of 2016, the date of Bastys' latest oath as an MP.

Due to the links, Parliamentary Speaker Viktoras Pranckietis last March refused to grant Bastys a sanction to work with classified information.

In a probe of Bastys' ties, the parliamentary National Security and Defence Committee concluded that the politician had acted against Lithuania's interests, dubbing his links with the persons specified in the State Security Department's materials as threatening national security.

The conclusions were endorsed by the Seimas.

Amid the scandal, Bastys suspended his membership in the Lithuanian Social Democratic Party.