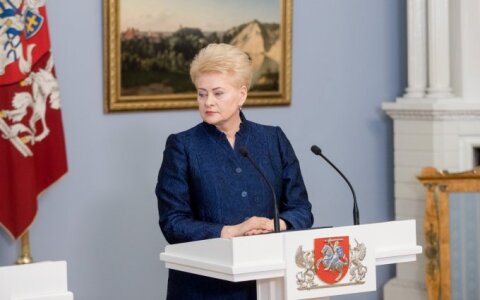 "Under the Constitution, secret ballot is mandatory in three cases only – on no-confidence in the government, the prime minister and one of the ministers. The list of cases for secret ballot envisaged in the Seimas Statute facilitates non-transparent deals and manipulations, thus raising reasonable doubts," the president said in a message to BNS via her press service.

"We need to stop covering under secret ballots," said Grybauskaitė in a position issued after MP Mindaugas Bastys survived an impeachment vote on Tuesday.

The Constitutional Court had concluded that the MP had committed a gross violation of his oath of office and the Constitution by concealing his ties with a former KGB agent.

Grybauskaitė dismissed the ballot as a political show.

On Wednesday, Bastys said he would give up his MP mandate. He took the decision to step down after an initiative announced at the parliament to take a repeated vote on revocation of his mandate.