V. Nekrošius: there is no chance of snap Seimas elections 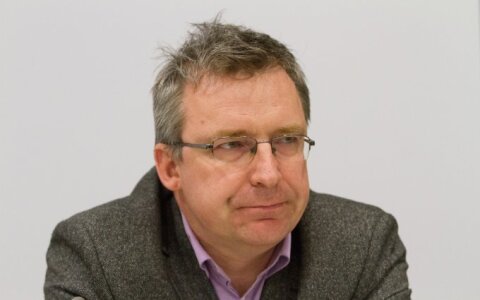 "Not one bit. 85 votes are needed and that's impossible. There's no chance," professor Vytautas Nekrošius thus described the possibility for snap Seimas elections. The situation developing in Seimas and public was discussed on the Dėmesio Centre talk show together with jurist, academic and Lithuanian Science Academy member professor V. Nekrošius and journalist Andrius Tapinas, LRT.lt writes.

A. Tapinas is the organiser of a protest in response to the failed impeachment of MP Mindaugas Bastys, who went on to resign on his own. When asked, why he is continuing with the protest despite the politician's resignation, Tapinas explained that M. Bastys' circumstances are not the main issue, but instead, how Seimas acted. The journalist stresses that this was simply the last straw and the public needs to make a stand.

Meanwhile V. Nekrošius finds the whole vote in Seimas to be nonsensical, a severe breach of the Constitution cannot be viewed as more or less severe, stating "There are no such things. It is either severe or not."

The professor explains that the issue is programmed in the Lithuanian Constitution, which specifies that the final ruling is made by the Seimas. V. Nekrošius believes that the Seimas' role in the process is unecessary as it is supposed to only act as a notary, confirming the fact, rather than opposing existing rulings.

The expert feels little surprise at the Seimas' move not to impeach Bastys and he observes there are deeper problems to consider. "Firstly, the problems are linked with the party system. For the past 10 years, we have done our utmost to convince people that parties are evil. That they are corrupt and whatever else – it's all there. But we forget that the basis of a democratic system is in parties. There is no other option. It simply does not exist. And we should strive to strengthen the system to its utmost, to nurture it. When we do not, when we beat the system down to the floor, that is when we have all sorts of professional cabinets and such," V. Nekrošius said, adding that he agrees with the Constitutional Court's chairman Dainius Žalimas in that the Seimas vote to not impeach M. Bastys was a "challenge to the rule of law."

When asked if perhaps this whole Seimas can be viewed as such a challenge, A. Tapinas agrees, to an extent, with the vote having been not the first time that the Seimas has discredited himself, according to the journalist. "Just look how the largest Seimas group acted, how the second largest Seimas group acted. They are in a sandbox, slinging dirt and we can't even talk of the work they were elected to do. When was the last time when there was a discussion of what the Seimas can do, what legislative packages it can pass for us to move forward with the reforms we were promised almost two years ago?" the journalist asked, also emphasising that the protest he is organising will not be a single event with no follow-up. After gauging the Seimas' response, further protests may be organised and not solely in Vilnius.

In this respect, A. Tapinas notes that such questions are directly linked with the Seimas' privilege to secret ballots and the journalist observes that MP Bastys' circumstances have illustrated that the Seimas is unable to adequately make use of the privilege, discrediting it. "In such a case, I would probably say that yes, of course we leave Constitutional stipulations as they are, but other votes in the Seimas should not be secret. Voters should be able to see, who votes for what, who fails to attend votes and such," A. Tapinas stated.

Seimas representatives plan to meet those gathered at the protest. When asked whether they may not be met with a rather antagonistic reception, the journalist explained that he hopes for a civil reception and for the politicians' responses to be heard out, with whatever response may come, coming after.

V. Nekrošius applauds civic action such as the protest, with citizens no longer simply waiting aside and expecting for someone else, such as the government, to make things happen. Nevertheless he points out an issue – a massive disconnect has developed between the citizens and the government. "This disconnect "this is us and this is them" is incredibly massive and it is very dangerous as well as truly unfortunate.

If today you offer good, decent people to enter politics, they will take you for a fool. Today A. Tapinas is a well-respected individual. Tomorrow, he for example, becomes a minister and I can almost guarantee that the day after he will be decried as a thief and so on. That is a major issue of our society," the expert states.

Due to the parliamentary crisis, the opposition has proposed to declare snap Seimas elections on June 3 this year, with the proposal being registered by MPs Gabrielius Landsbergis, Eugenijus Gentvilas, Juozas Olekas, Remigijus Žemaitaitis and Bronislovas Matelis, in essence the heads of all opposition groups. V. Nekrošius is not convinced this can be made to happen, describing the need to reach the 85 votes needed for a snap election to be called as impossible to achieve.

While a snap election has been called before during the time of the Supreme Council, he points out that the situations cannot be compared. In 1992, the government had entered complete gridlock and continued work was impossible, meanwhile now decisions are still being made, work continues, irrelevant whether they are approved of.

A. Tapinas is also not optimistic over the chances of snap elections, but he notes that tension is present not only in the public, but also in the Seimas corridors, with many in Seimas realising that they are nearing a dead end.

"To me, this Seimas, as the one before is not the Seimas I dream of. Unfortunately, that is how it is. I see much destruction now, much desire to simply be, exploit, make useful decisions for oneself or some third party. As for whether further Seimas will be better, it will depend on our society, primarily on the parties, how they manage to draw people. Based on what we see of recent events, particularly within the Conservative party, there are massive efforts to discredit the idea of renewal and make it null. Interesting processes are ongoing in Lithuania," V. Nekrošius said.

V. Nekrošius: there is no chance of snap Seimas elections