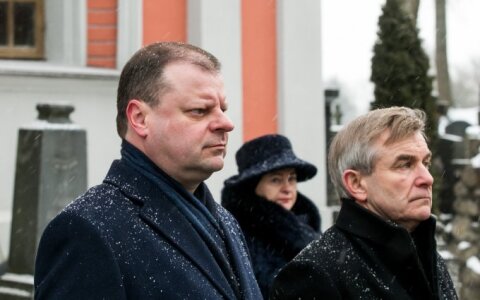 Viktoras Pranckietis could consider stepping down as the speaker of the Seimas if he sees no possibilities for consolidating the parliament for efficient work, Prime Minister Saulius Skvernelis said on Friday.

"I think it's up to him to decide. If he sees no possibilities to consolidate the Seimas for adopting these decisions and making its work more efficient, this is an option," Skvernelis said at an online conference hosted by Delfi.lt when asked whether the speaker should quit.

"If he meant by saying so that he would assume that leadership and do what I have just said, he may succeed," he added.

Pranckietis, who was nominated for the job by the ruling Lithuanian Farmers and Greens Union (LFGU), told participants of Thursday's protest rally outside the parliament building in Vilnius that he was ashamed of some members of the Seimas.

Following the statement, his party leader, Ramūnas Karbauskis, said that Pranckietis had to step down if he was ashamed.