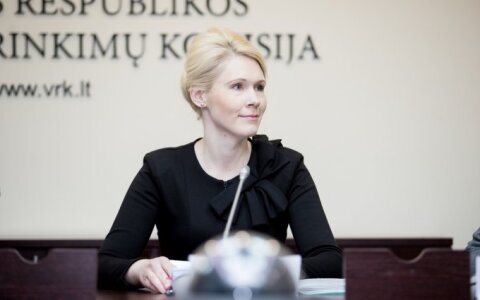 Members of the opposition in the Lithuanian parliament are initiating a no-confidence vote against Laura Matjošaitytė, chairwoman of the Central Electoral Commission.

Twenty-nine lawmakers on Monday signed a motion asking Viktoras Pranckietis, the speaker of the Seimas, to include this issue into the agenda of Tuesday's sitting.

The initiators accuse Matjošaitytė of "systematically" violating the principle of collegiality in the commission's work and blocking discussions on certain investigations, thus preventing the panel from adopting decisions regarding these probes.

They also criticize the chairwoman for her allegedly chaotic work and for taking decisions on her own.

Pranckietis, who last year proposed Matjošaitytė for the job, has voiced his support for her amid criticism from the opposition.

Matjošaitytė has refused to step down.

Most of the criticism centers on the commission's failure to discuss an opinion on a matter related to the ruling Lithuanian Farmers and Greens Union (LFGU) that was drafted by a working group back in June 2017.