Should the president have congratulated Vladimir Putin? 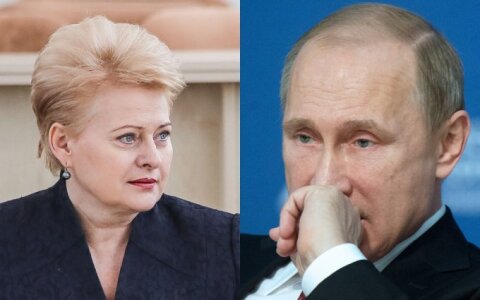 MEP Valentinas Mazuronis has stated that the head of state made a mistake by not congratulating Vladimir Putin with his re-election. Most of the world, including Western, leaders have done so, even if not immediately. Not everyone shares V. Mazuronis' opinion, Lietuvos Žinios writes.

"I believe that by not congratulating V. Putin with his re-election, our President D. Grybauskaitė made a mistake which does not benefit Lithuania. You can approve or disapprove of his policies or actions. You can and must have your own position and opinion, however it is the president elected by the majority of Russian citizens. Russia is and will continue to be our neighbour. It is a mistake to not to not make a simple courtesy gesture. Perhaps we will not recognise the results of the Russian elections? The major EU member state and US leaders have congratulated while we are trying to appear "cool" once again. Just how "cool" are we?" the MEP asked rhetorically on his Facebook profile.

Related articles
After Putin's victory, Kremlin propaganda turns to Lithuania: you're unwanted, even the US will betray you
Baltic reactions split: Estonia congratulates Putin on re-election, Lithuania doesn't

Not everyone shares his views, however. Former EU ambassador to Russia Vygaudas Ušackas says that it would have been ideal for all of the European Union to hold a unified position on this question, which did not happen.

"I believe the president acted correctly. It is not necessary to hurry with congratulations because V. Putin is an individual, who broke international law, led the Crimean annexation and Ukrainian conflict. If they meet somewhere in a corridor, of course there will be congratulations, interacting, but bilateral questions can be resolved at a lower level. As such, I understand and support the president's position," the former diplomat said.

He admitted that relations between Lithuania and Russia are currently at a very low point, but there are means of diplomatic buffering and the two states' foreign ministries retain minimal contact.

"I would not dramatize the consequences of not congratulating," V. Ušackas summarised. According to him, no one else should present their opinion on these questions and the prime minister should go to the Presidential Palace and coordinate positions with the head of state before making statements.

Political analyst Kęstutis Girnius is convinced that, "Moscow won't cry because we didn't congratulate them, but Lithuania will stand out among other states by demonstratively displaying its discontent with Russia." According to the expert, Lithuania is displaying a hard line position because the Russian president received congratulations from US President Donald Trump, German Chancellor Angela Merkel and French President Emmanuel Macron.

"If our president does not wish to offer congratulations, she doesn't have to, but I don't think it will help Lithuania, even if it should cause no harm. We could simply be left somewhat isolated and when talks about relations with Russia will be held, Lithuania's opinion may be disregarded because Lithuania will be held to be a country with a hard-line opinion. Our opinion will simply not be listened to," K. Girnius said.

The political scientist believes that protocol demands to greet the president of states you maintain diplomatic links with when they are elected or re-elected. As for the decision to not greet, it is a hard-line step.

"I believe that the other states have a simple thought process – the president was elected even if the elections were not smooth, but it is a country we retain diplomatic contacts with, thus we should greet them. Lithuania is clearly displaying hostility to Moscow and this does not increase the latter's love for us. Say if it ever needs to hamper some Baltic state, Moscow will choose Lithuania," the political analyst mused.

K. Girnius believes that we are overly demonstrative in our displays of dislike towards Russia. "If, say Latvia and Estonia express their opinion on Russia every three months, then our president and foreign minister – every two weeks," he explained.

MP and former Lithuanian ambassador to the United States, Žygimantas Pavilionis applauded the president's decision. According to him, the president is continuing an old tradition, which was begun back during the tenure of President Valdas Adamkus to not participate in such events.

"If we, as representatives of a democratic state are to congratulate the destruction of elections in a neighbouring state, we would not respect our own democratic values and constitution. Such a stance by the president gives hope that something will change in Russia," the MP said.

He explained he saw V. Mazuronis' statement on social media and even responded in the words of Ronald Reagan: "Any cooperation with a Soviet regime will lead to a final loss." According to Ž. Pavilionis, history has proven that R. Reagan was right.

"I believe that V. Mazuronis is playing with the Lithuanian protest electorate. He knows it is not simple or easy to say the truth. Nevertheless, it is necessary to understand that fighting for truth is necessary because it is not just our matter, speaking about Russia, we are talking about the fates of millions of people. We cannot bow like V. Mazuronis is doing because Europe's will then bow three times deeper. Then there will be no hope," the politician said.

According to him, it is necessary to interact with the Russian people, but not with the Kremlin, which is taking away freedom from the peoples of the whole region.

Should the president have congratulated Vladimir Putin?